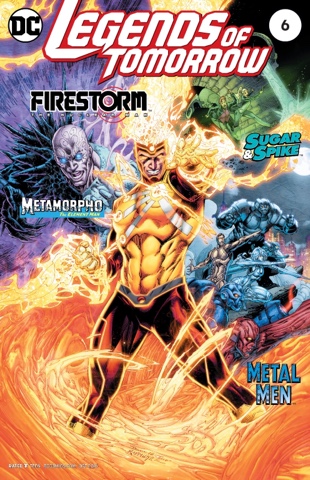 It's the final issue of Legends of Tomorrow and I'm happy to say the book goes out on a high. In order of appearance... 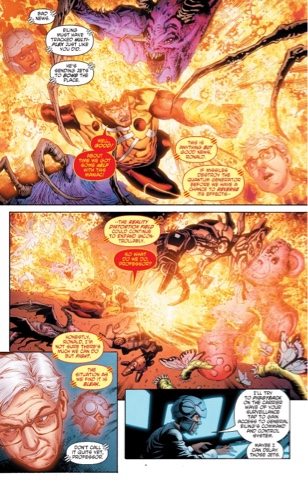 The encounter between Firestorm and Multiplex concludes, with Martin and Ronnie forming the superhero and Jason equally awesome in his advisory role. The struggle to stop Multiplex wrecking reality with his quantum tinkering climaxes in a hugely satisfying manner, Jason confronts rival Monica about her appalling behaviour and Ronnie makes a decision about his future. Gerry Conway's script is terrific - tight, true to the characters, entertaining from beginning to end. The art by penciller Eduardo Pansica, inker Rob Hunter and colourist Andrew Dalhouse is first-rate superhero fare, big and bold, bright and beautiful. If DC Comics doesn't re-sign this team for an ongoing they're making a huge mistake - this is a take on Firestorm that, with this talent on board, has legs. 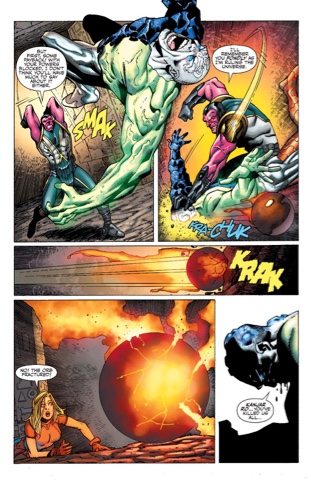 Metamorpho is on a world in another dimension, caught in a war for the Orb of Ra that changed him from mercenary Rex Mason into the Element Man. The other combatants are Simon Stagg's caveman lackey Java and alien despot Kanjar Ro, while Sapphire Stagg's loyalties are dangerously subject to change. The finale sees Metamorpho win the war, but lose something else, as writer/penciller Aaron Lopresti - the excellent John Livesay inks - throws us a curveball. There's an artistic implication on the final page that Rex kills Simon Stagg, but I'm choosing to interpret that as creative use of black space. It's a fun ride, with Rex an engaging lead. But would someone please let colourist Chris Sotomayor return Rex to his traditional, more striking colour scheme? 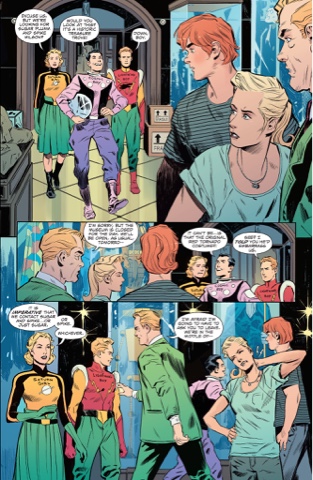 Sugar & Spike has been, along with Firestorm, my favourite strip. The playful incorporation of wacky concepts from Silver and Bronze Age stories has been a joy, while the grown-up versions of DC's titanic toddlers have been great leads. Spike is the sweet guy you'd expect, and while Sugar has been irascible - to say the least - some people do grow up grumpy, and she does have a softer moment this time. Writer Keith Giffen saves the best to last, as he has Legion of Super-Heroes founders Saturn Girl, Lightning Boy and Cosmic Boy show up to hire the two private eyes. Legion members from further down the timeline also show up - including the wonderful original Supergirl - along with one of their earliest supervillains. Former Legion writer Giffen has affectionate fun with such things as Cosmic Boy's well established history buff status, but never takes the mickey. As many times as we've seen the early years Legion guest star in comics, I've never seen anyone draw them in their Adventure Comics #247 looks; artist Bilquis Evely does them proud; her naturalistic linework is surprisingly suited to the larger-than-life cameo characters, while colourists Mat Lopes and Ivan Plascencia deserve gold stars for research and application.

Len Wein has been spinning a wonderfully old-fashioned yarn starring the Metal Men - Gold, Platinum, Tin, Lead, Mercury and Iron. Not 'old-fashioned' in a bad way, but in his attention to detail - every character gets a moment to shine, every nugget of story is tied up. This time, the classic Metal Men and their recent rivals - Copper, Silicon, Lithium, Aluminum, Zirconium and Magnesium - team up to defend New York against Chemo, and the mastermind behind their recent troubles is revealed. The identity is a little underwhelming - we're talking very minor DC baddie - but their undoing makes for a nice moment in the story. Once more, Wein nails the Metal Men's fun, noble personalities, giving them all a chance to shine and one a real Hero Moment. Penciller Yildiray Cinar, inker Trevor Scott and colourist Jeremy Colwell provide expansive, breezy art that fair glows with colour. They handle the near-constant action and occasional quieter moments with equal aplomb - I never knew robots could look so passionate. The layouts are dynamic, propelling the story along in fine style, and the ending is nigh perfect.
With no announcement that this book is continuing, I'm keeping my fingers crossed for a new Metal Men ongoing alongside my hoped-for Firestorm fortnightly. More Sugar & Spike could be great, but these six issues have been so perfect that I'm OK with leaving their story here for awhile - cameos and guest appearances across the DC line may be the way to go. I do, though, hope Bilquis Evely gets a continuing DC showcase for her work. As for Metamorpho, he's never been a favourite and the super-solid work here hasn't warmed my heart towards Rex. While I'm not aching for more solo adventures, I'd be good with him getting a slot on a JLA team.
Penciller Brett Booth, inker Norm Rapmund and colourist Andrew Dalhouse provide the final cover and while some of the characters are a little lost in the composition, Firestorm looks superb.
So, farewell Legends of Tomorrow - I hope it returns sometime, with a new batch of characters and the same consistent quality. It'll be interesting if it does get a second run, because that won't be the accidental anthology this one was, comprising what were intended to be four mini-series. So far as happy accidents go, I can't imagine a jollier one.
Aaron Lopresti Bilquis Evely Eduardo Pansica Firestorm Gerry Conway Keith Giffen Legends of Tomorrow #6 review Len Wein Metal Men Metamorpho Rob Hunter Sugar and Spike Yildiray Cinar