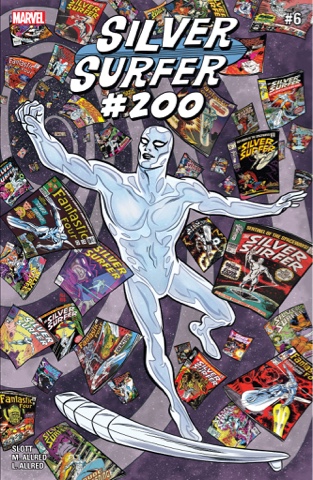 I've not been reading many Marvel Comics of late. Secret Wars wasn't my cup of tea, providing a great opportunity to stop purchasing digitally day and date and finally use my Marvel Unlimited subscription. Civil War 2 pulling the line together again - well, more like strangling it - has seen me buying only books I really, really like. Vision, Scarlet Witch, Hellcat... and Silver Surfer.
There's a wonderful breeziness to this series as the Surfer and companion Dawn Greenwood explore the literal Marvel Universe. Big fights, bigger vistas and, occasionally, big emotions. And that's what we get in this issue, the sixth of the latest relaunch and the 200th Marvel publication bearing the name. The action comes as Spider-Man helps the Surfer deal with shape-changing 'Terra Forms', which take on the appearance of your greatest fears. This makes for a cute scene with Spidey biffing the lookalike of a certain demon...

The heart of the issue, though, is Dawn's reunion with mother Libby, who walked out on her twin daughters and husband 13 years earlier. Dawn's not prepared for it, the Surfer having decided to find her as a surprise present and zoomed them to Libby's front door - even after years of dealing with Earth people, he's not exactly intuitive when it comes to human emotions. The Surfer could take Dawn away again, but she decides to confront her mother. 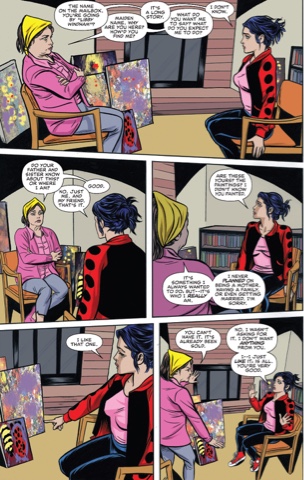 An awkward start, but as Dawn tells Libby about her amazing life, they seem to be making a connection. That notion is tested as the two story strands converge...
Writer Dan Slott's pitch for this issue could have been that popular Facebook status: 'It's complicated'. I'd have loved a wonderfully warm reunion story, with Libby's reasons for abandoning her husband and kids explained and excused, but Slott would rather make us think.
Damn you, Slott!
The script is as smart as I've come to expect from Slott, with a sharp plot, well-worked action scenes and terrific dialogue. 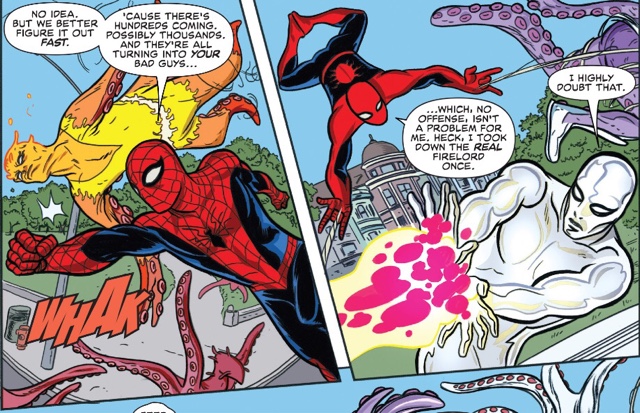 As for the art, illustrator Mike Allred and colourist Laura Allred give us some wonderful San Francisco-set scenes (extra points for ignoring the glowing bits of Spidey's current costume). It's fascinating that the first impression is pure eye candy, but a closer look shows that his characters have real depth. And Allred M. has few peers when it comes to showing body language.
Throw in a lettercol and titchy repros of all 200 covers and you have a splendid anniversary issue, one that shows us that sometimes the biggest adventures are the more intimate ones.
Dan Slott Laura Allred Mike Allred Silver Surfer #200 Silver Surfer #6 review Spider-Man