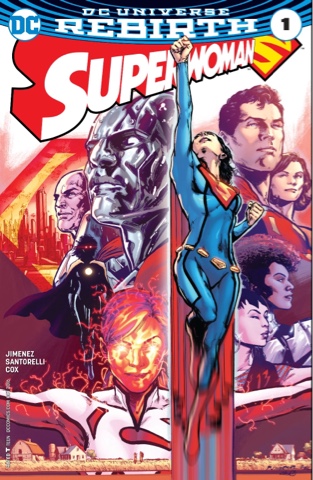 A few months ago, when the New 52 Superman died, in a panel that didn't call attention to it itself, his energy passed onto Lois Lane and Lana Lang. Anj from Supergirl Comic Box Commentary totally called it, as the kids say, and predicted it would lead to this Superwoman series. And here it is, the new book we knew would star Lois Lane. But what of Lana? 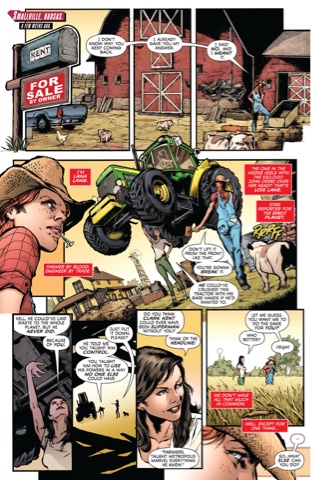 She's here too, training Lois in the use of her new abilities. How to fly without getting dizzy, how to focus heat vision ... it turns out Lana helped train Clark before he became Superman. She's great at it, and soon Superwoman is the new Metropolis Marvel, swooping in and out of the concrete canyons, saving lives and winning hearts.
Oh, and I liked the Kingdom Come nod. 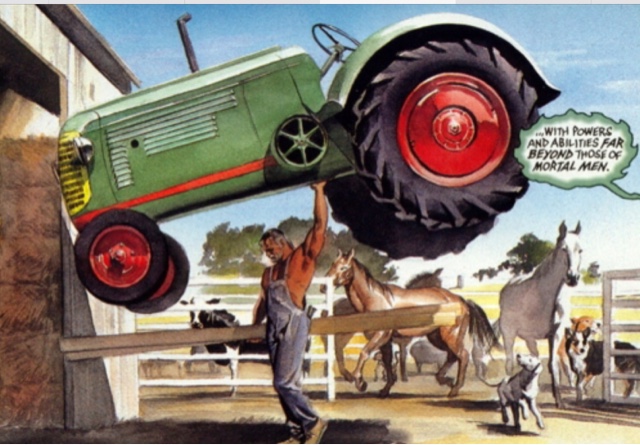 Lana, meanwhile, has moved from Smallville to Metropolis and parlayed her knowledge as an electrical engineer into a career as science expert for the Daily Star digital media group. She's on hand to be the silent partner as Superwoman Lois ensures self-styled Superman Lex Luthor doesn't get to be their late friend's legacy.
Lex's latest grandiose gesture, the Gestalt, a ginormous battleship to help protect the city, leads to Lois's biggest test yet. She does well for a newbie, but needs help. Super-help. 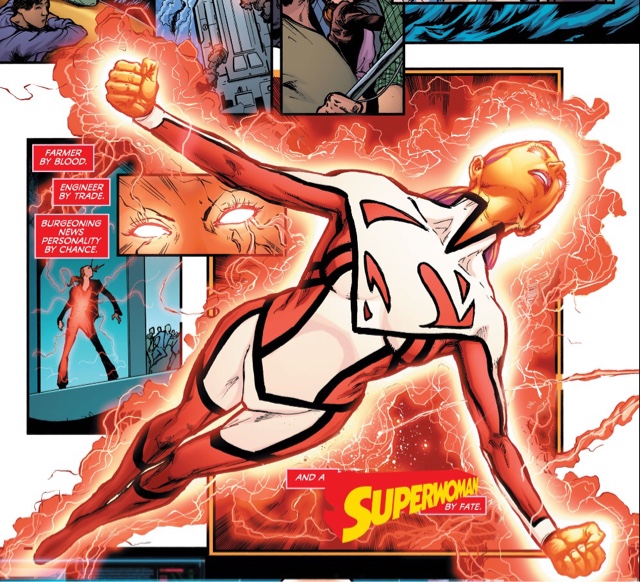 It's a moment I wouldn't give away were it not for Lana as Superwoman Too on this issue's cover. Where Lois is a trad Superwoman, Lana is a callback to the Nineties Electric Superman, complete with jagged costume design. It's a really clever move by writer/artist Phil Jimenez, using Superman history to create something new. That's also what he's doing with his spin on the Silver Age Lois/Lana relationship, frenemies before the (admittedly ugly) term was coined. 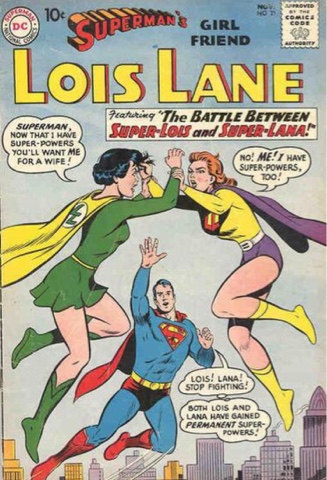 There's a lovely dynamic between the pair - Lana the quietly determined farmer/electrical engineer, Lois the sarcy big city reporter, both of them singularly smart, good people. Seeing them team up to save a bridge from Lex's warship when it's taken over by forces unknown gives me a huge kick. Jimenez makes the team-up extra special by showing that superpowers don't make things super-easy - sometimes brains are the biggest super-power of all. 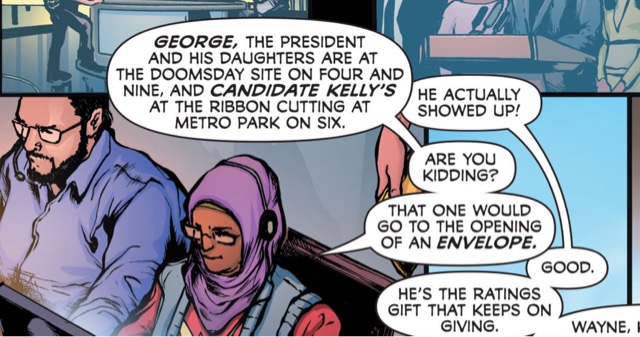 I also like this new character; she doesn't get namechecked here, but Jimenez kindly reveals, by the power of Twitter, that she's named Nadidah and he has plans for her. Brilliant - I work in journalism and she totally sounds like a news person, endearingly cynical (seriously, we are lovely people!). I also hope to see more of George Taylor, original editor of the Daily Planet, New Teen Titans escapee Bethany Snow and Lana's production team. 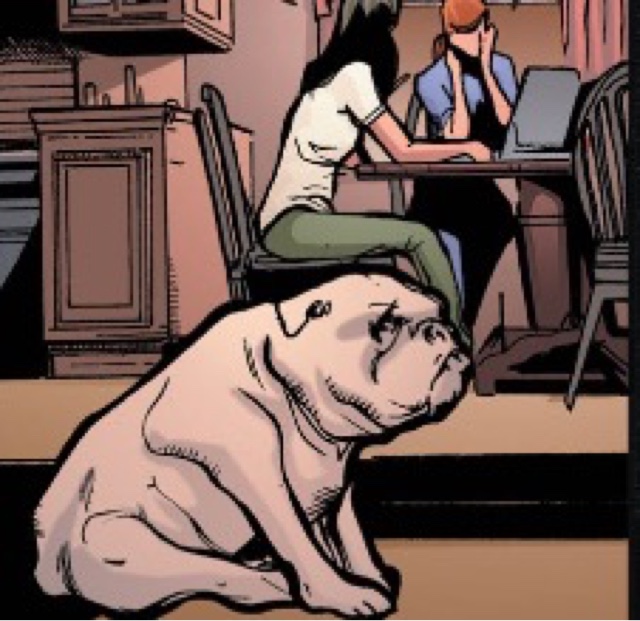 Oh, and if Lana's adorable pup hasn't been named yet... CONTEST! I'd go for Potter.
Did I mention that this is a double-sized issue? Not in terms of pages count, but certainly where content is concerned - Jimenez packs the pages with panels, giving us enough story for two regular DC books (or a year's worth of some Marvels). It makes me very happy I'm reading digitally, with the ability to go in close.
Guided View on Comixology also lets me better appreciate the pencils of Jimenez - he's a veteran by now (sorry sir!) and it shows - his storytelling is crystal clear, populated by distinctive people in convincing surroundings. The splash spread of Lois flying over Metropolis is especially lovely, the quiet flashbacks of Lois and Lana forging a partnership a model of how to make quieter moments compelling, while the final fight scene - yep, there's a supervillain in here - is shockingly good.
Matt Santorelli is a new name to me, but he does a splendid job of enhancing Jimenez' pencils, while colourist Jeromy Cox and letterer Rob Leigh do their usual great job. Jimenez' movie poster-style cover, coloured by Steve Downer, is a tad too busy, maybe, and having Superwoman Lois looking up, up and away from the reader is a surprising choice, given everyone has known it's her for months. Once more though, you can't fault Jimenez for trying to give the reader their money's worth and I have to say, I'm hugely intrigued by the inclusion of teen mystic Traci 13 and 'I was there long before Riri' Natasha Irons, both characters I've missed having around. Just don't bring back Cir-El... I could totally see Jimenez reusing the least-popular Supergirl ever - mind, he'd probably make her a decent character. 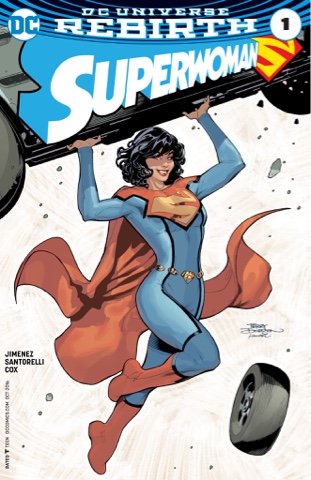 The variant cover by Terry and Rachel Dodson is simpler in concept, and rather gorgeous all-round but again, the two covers are doing different things - both do what they set out to do very well. Paul Kaminski and Eddie Berganza are the final people in the credits box and they deserve kudos for their editing efforts.
DC Rebirth really has given a shot in the arm to the company's line-up and this is one of my favourites - a massively entertaining superhero story full of character, action and mystery. Do not miss it.
Eddie Betganza Jeromy Cox Matt Santorelli Paul Kaminski Phil Jimenez Rachel Dodson Rob Leigh Steve Downer Superwoman #1 review Terry Dodson