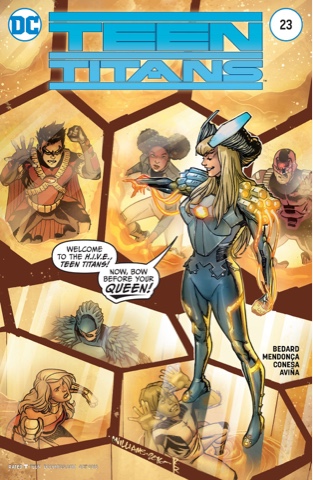 As a change from all the DC number ones, here's the penultimate issue of the New 52 Teen Titans.
OK, the logic of that sentence wandered off pretty quickly, but I wrote this review assuming it was the final issue... it's a great final issue. Hopefully next month's actual final issue will be as good.  Anyway, revise, revise, revise.
So.... Red Robin, Wonder Girl, Bunker, Beast Boy, Power Girl and Raven are having a relaxing night in New Orleans when a bomb hits. 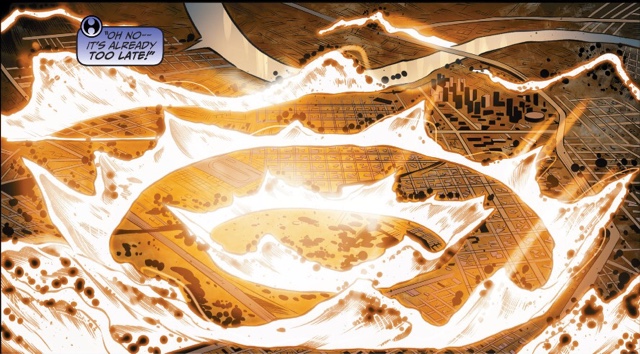 A psychic bomb. Quickly, everyone in the city becomes a drone of the Hive's Queen Bee, who desires order through control. The Titans escape her spell, having a psychic among them, Raven, who can act as a buffer... For awhile, anyway. Can they fight their way past a city of innocents to get to the Queen Bee and stop her nefarious notions?
Too blooming right, they're the Teen Titans. Red Robin - let's stick to Tim, that name remains horrible - comes up with a plan on the hoof, but there's a twist... 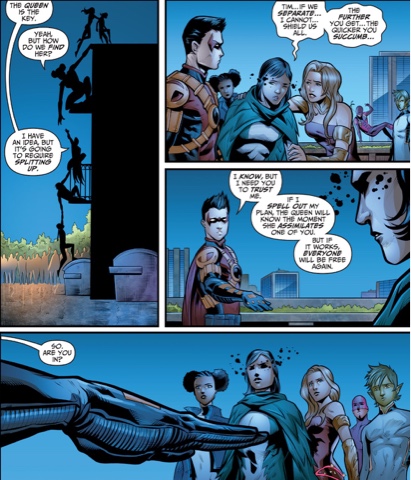 And wouldn't you know it, they've soon taken out the Queen Bee where it took New 52 Superman months to beat the the Brainiac-born biddy.
The book ends with the team resuming their relaxation as careful readers realise this story is bringing to an end Tim's association with the team he founded way back when. In DC Rebirth time, Tim's already back in Gotham, out of the vile Red Robin costume and acting as Batwoman's number two in Detective Comics. The new Teen Titans book will see them led by the Damian Wayne Robin, God help them.
Writer Tony Bedard has been winding down this book for several issues, with every one showing what an underused asset he is among DC's writing stable (see also Sterling Gates). He understands character, he knows DC history, he can plot out a good story ... the reveal of Tim's plan brought a bigger smile to my face than anything else this week.
And a throwaway remark by Wonder Girl in this stonkingly fun panel really adds to the story.

Why isn't Bedard writing a Rebirth book? (And if he is, please point me over there.)
The artwork, as you can see, is really terrific. Penciller Miguel Mendonca and inker Diana Conesa produce splendidly composed and finished artwork, somehow putting an innocence back into characters who have been well and truly battered since DC's 2011 revamp. Has Tim Drake ever looked so adorably sheepish?

And just look at this Beast Boy moment, a wonderful bit of whimsy, perfectly conveyed. 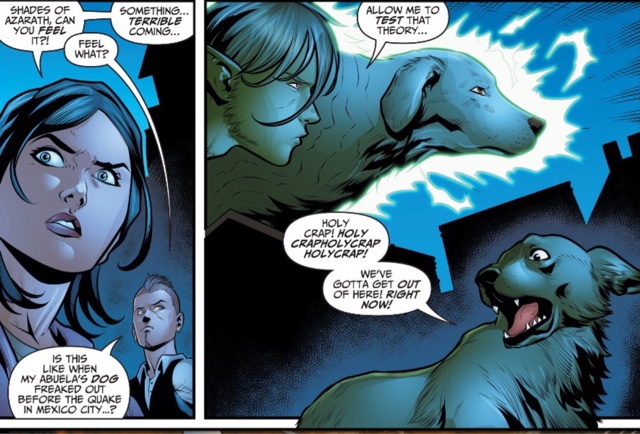 Were DC Comics to re-team Bedard, Mendonca and Conesa on, oh, I don't know, Power Company... anything, to be honest ... I'd be there. Legion. Give them the Legion of Super-Heroes.
Tony Avina's colours bring a convincing night-time atmosphere that ensures the various energy effects really pop, while Corey Breen's font work is stylishly attractive - the title lettering is especially nice.
To be honest, I'd pretty much forgotten this Queen Bee, so when I saw this issue's cover my reaction was, oh look, Illyana's wearing a croissant. Maybe it's her DC Earth counterpart. Anyway, while I'd love to see what Mendonca and Conesa would have done, I like this one by David Williams and Rod Reis, it's so Silver Age.
So, one more issue. Different artistic team, but Bedard is back. I can't wait to see what kind of bow he puts on this series.
Corey Breen David Williams Diana Conesa Miguel Mendonca Rod Reis Teen Titans #23 Tony Avina Tony Bedard