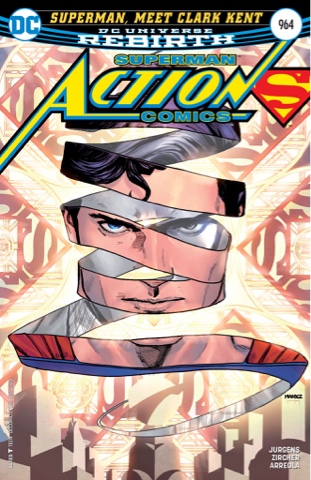 Clark Kent has high cholesterol. Who knew? That's the cutest surprise this issue. Well, you'd expect Superman to be burning off the fat like nobody's business. 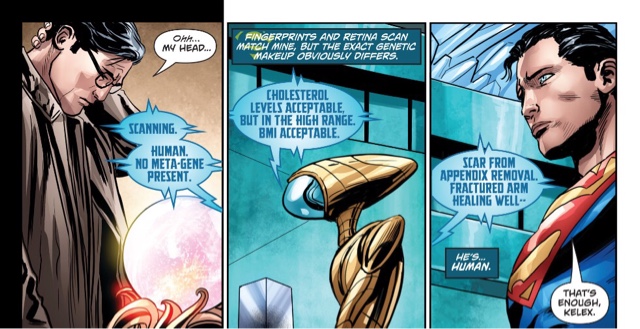 Then again, this Clark Kent isn't Superman. Kryptonian tech and a psychic globe prove it as the pre-Flashpoint Superman, who's taken over for the recently deceased New 52 version, whisks the man claiming to be Clark Kent to his Fortress of Solitude.
Superman suspects Clark is the New 52 version, back from the dead. Or maybe an imposter. Whatever the case, he needs to know Clark is being straight with him
But it looks like he's telling the truth. He seems to be totally sincere when he describes his adoption, which had nothing to do with being blasted to Earth from the dying planet Krypton. So while it seems Superman is perhaps being a bit stern with him, it makes sense that he doesn't tell his 'guest' he doesn't believe he's Clark Kent because he's Clark Kent - and an alternate Clark Kent would have super powers.
He does soften, though. 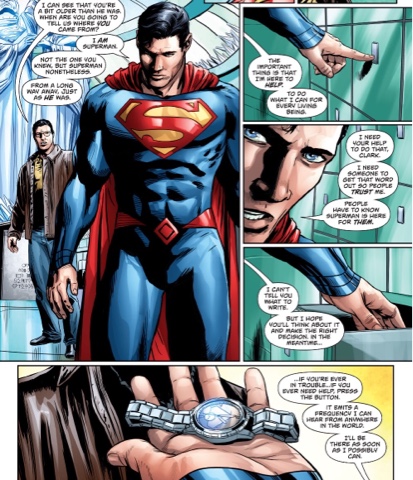 Back in Metropolis, the mysterious bearded man gets onto the grounds of Geneticron, the mysterious company Clark Kent says he was investigating when New 52 Superman asked to borrow his identity. And by the time Superman and Clark Kent get back to Metropolis, Geneticron looks very different.
There's an eye-catching last page, which I won't spoil, but before that we get several pages juxtaposing an article by Clark Kent with images of our cast. 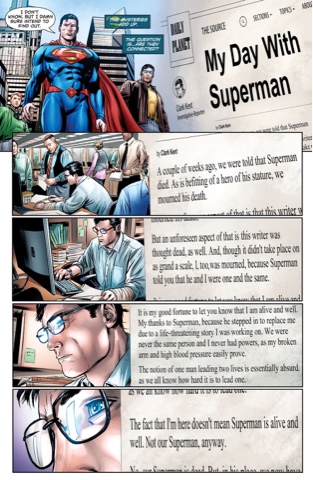 Oh, how the Daily Planet loves a first person piece; for 'I spent the night with Superman' read 'My day with Superman'. And just like that, the secret identity is put back in the bottle. Should this Clark somehow vanish from the storyline, return to an alternate Earth or whatever, and the New 52 Superman not return from the dead, pre-Flashpoint Superman can grab his old name back. No more Clark White, or Smith or whatever.
I love the picture byline of Clark, a pen portrait rather than a photograph. It's a typically stylish detail from illustrator Patch Zircher, who produces page after page of slick, sinewy art. He captures the confusion of Clark, and steely determination of Superman - both desperate to have their questions answered - superbly. Zircher and writer Dan Jurgens work wonderfully well together, ensuring, for example, the recently added statue of Ma and Pa Kent is removed from the Fortress by the time Clark arrives. And the final sequence - the equivalent of a TV drama montage, though hopefully without the wretched Hallelujah playing - has a delightful storybook quality to it. While I'll always prefer a Fortress with a giant key, Zircher's big panel of Superman opening his massive front door nicely illustrates his strength. 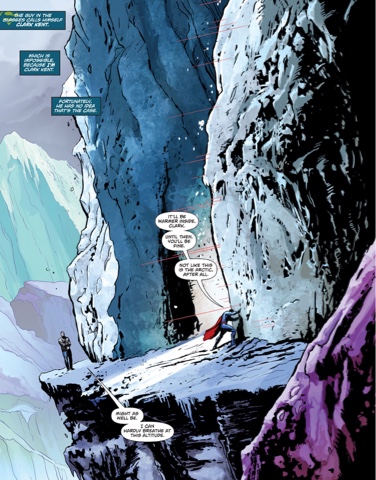 It rather reminds me of one of the first comics I ever bought... 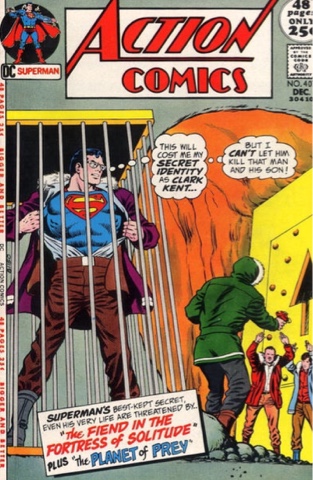 ... I was convinced that ruddy great rock was alive, it's fair juddering!
Jurgens does a fine job of developing this book's mysteries, I really can't guess where this is going. At the same time as he moves things into the future, Jurgens gives us little nods to the classic Legend, such as Superman's addition to the Kent farm this time. Ulises Arreola on colours and Rob Leigh on letters add their own skills and sensibilities to the creative package. 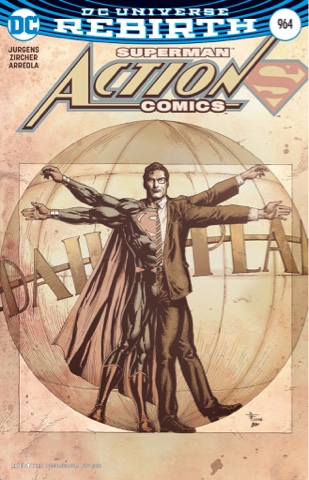 And as for the covers, if there's a better main and variant this year I'll be amazed. The variant is Gary Frank's take on Vitruvian Man - hmm, should da Vinci get a breakdowns credit? - and it's a cracker. Just look at how Frank's worked in the Daily Planet. As for the main image by Clay Mann, also turning on the idea of two-men-in-one, it's just beautiful. Based on an idea by Jurgens, it's superbly conceived and hypnotically executed. Brad Anderson colours the variant, Tomeu Morey the main, and they've done a splendid job.
The entire creative team - the above-mentioned and editors Paul Kaminski, Mike Cotton and Eddie Berganza - are bringing us what's shaping up to be a classic run. And twice a month at that!
Action Comics #964 review Brad Anderson Clay Mann Dan Jurgens DC Rebirth Eddie berganza Gary Frank Mike Cotton Patch Zircher Paul Kaminski Rob Leigh Tomeu Morey Ulises Arreola