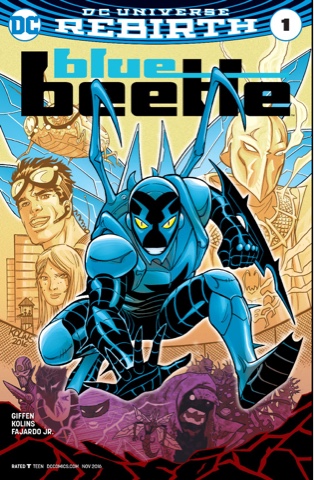 Blue Beetle Jaime Reyes is having recurring nightmares. He's in Egypt and Dr Fate is fighting a giant Blue Beetle. What could it mean? Pal Brenda isn't much use, she's too busy thinking of her next snarky line. 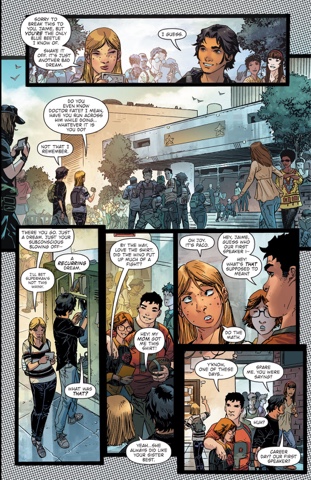 Their chum Paco, meanwhile, is interested in Career Day at school, and who should be a guest speaker but Ted Kord, madcap scientist and Jamie's self-appointed - and so far pretty useless - mentor in superheroing. 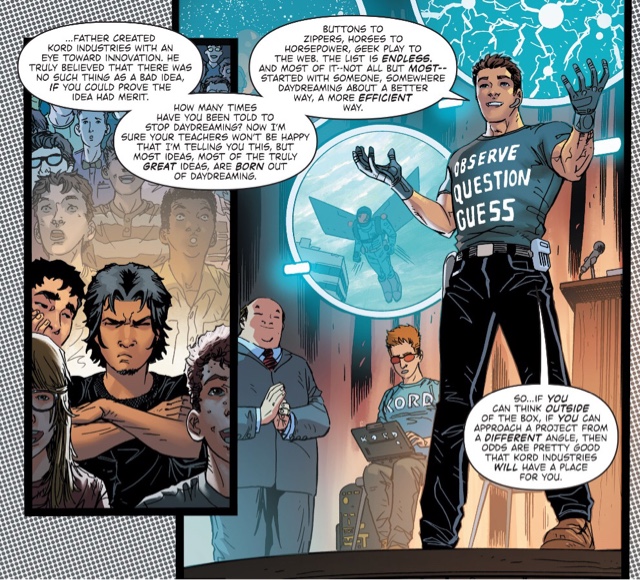 After failing to impress the students with his inspirational words, Ted is spotted chatting to a member of local gang The Posse. His assistant tells Jaime the boss would like a word. Soon Ted has Jaime in his Bug and is pointing him in the direction of a mystery. 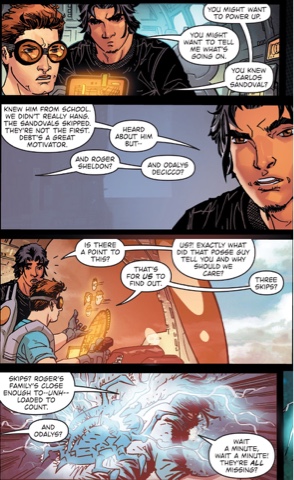 And missing schoolmate Roger turns out to have previously hidden talents. Talents which remind Ted of someone else's abilities. 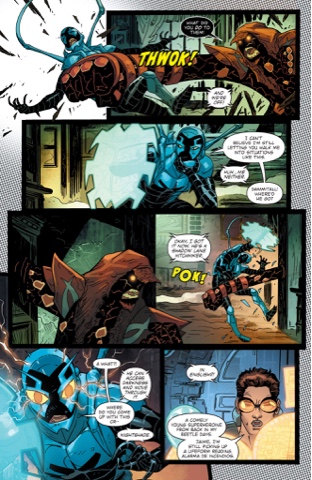 Following on from the Blue Beetle: Rebirth, this is more of the same... in a good sense, what with its blend of teen soap and superheroics. Jaime is enjoyably irked by Ted's apparent refusal to walk him through an adventure; the kind interpretation is that Ted wants to let Jaime find his own route through superheroing, and if things get really crazy, he's there in his Bug.
Paco and Brenda continue their 'won't they, won't they?' non-romance, while antagonist of the piece Blot (oh dear) makes for an entertaining challenge. Better still, he gives writers Keith Giffen and Scott Kolins a chance to slide a bit of DC history back into the Rebirth puzzle. Has Ted Kord's former Charlton Comics stablemate Nightshade had so much as a mention in the last five years of the New 52? I hope this means she'll be popping up soon.
The Ted who was around intermittently in the New 52 never became Blue Beetle - well, so far as I know - but here's a direct reference to him having been a proper superhero. Add that to the Rebirth mention of a heart attack and that's a whole chunk of classic Ted Blue Beetle we get back.
And that's not all this issue has to offer in the way of returning characters, check out Ted's assistant...

Don't recognise Teri Magnus? This is how she was best known to readers of the recent Justice League 3001 book, on which Giffen and Kolins were key contributors. 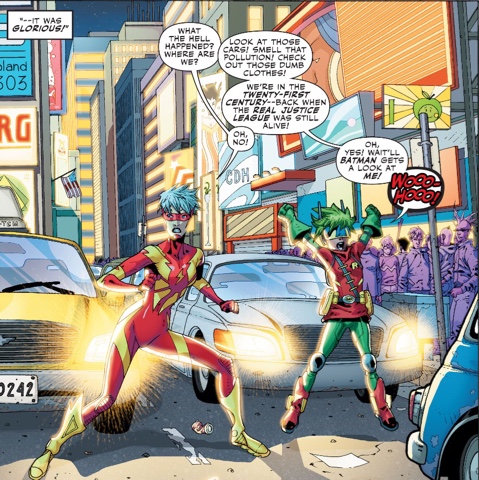 That series ended with Teri - the 31st century Flash - being sent back to our time (along with future Robin Tina Sung) and look, here she is! I wonder if the irrepressible Tina is rooming with her... she could meet Brenda in an 'irritant-off'.
The most surprising thing this issue is that Jamie's hometown has a resident super-team of semi-thugs and no one bats an eyelid. That's the DCU, I suppose.
Giffen's script is very Giffen - full of smartarses but, happily, I have a high tolerance for same; it's also got the best aspect of Giffen, the unpredictability... I never know where a Giffen book will go. As for Kolins' illustrations, they're as delightful as I've come to expect from this DC veteran. The storytelling is as succinct as it is stylish, with appealing characters moving dynamically through a well-drawn world. Points to Kolins for reflecting today's age, in which people are constantly looking down at screens rather than at one another.

And I adore his transformation sequences. 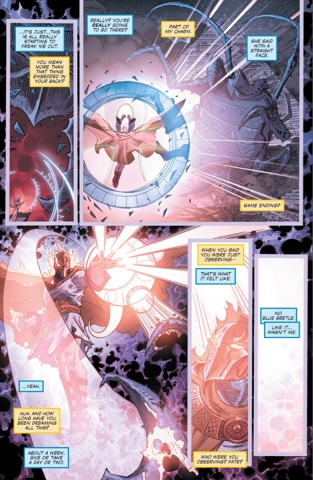 And it's all so nicely coloured by Romulo Fajardo Jr, who does an especially fine job setting a dreamy mood for the opening Egypt sequence. Also making a nice contribution is Josh Reed, whose fonts have personality. 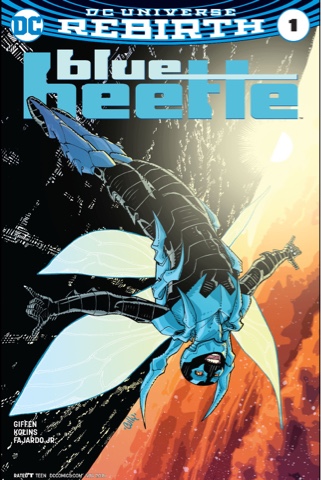