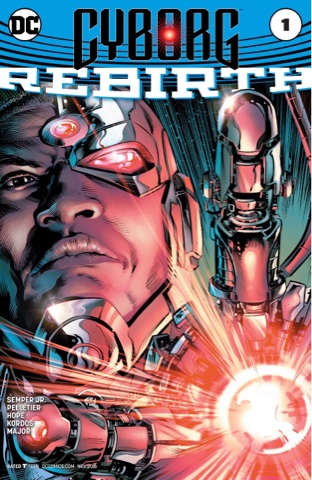 It's only a couple of years since we saw the New 52 origin of Cyborg, but here it is again as the new creative team of John Semper Jr and Paul Pelletier give us a new spin on Victor Stone.
The story is rather neat - Cyborg must try to stop a nanite ogre breaking into the STAR Labs branch run by his father Silas. All the while the beast, who identifies himself as Malware, is testing Cyborg's capabilities on behalf of his unseen handler. As he analyses Victor, he 'reads' his past.
It's the familiar tale of a football hero whose critical injuries from an Apokolips invasion led his father to take drastic action, melding his surviving bodily parts to hi-tech armour. Since then, Victor has become known to world as Justice League member Cyborg, a cross between the internet and a tank. And he's come to terms with what is, at base, a living nightmare.
The fight with Malware finally leads to Victor losing what peace he's found, via a recording his father made, one he was never meant to hear.

At first glance, it seems to be a version of Alan Moore's seminal Swamp Thing story, the Anatomy Lesson. Thinking on, though, I'm not convinced. Swampy learned that he wasn't a man transformed into plant, but a plant that had the memories of a man. But Victor? He's simply learned that his super-rational father is prone to a bit of philosophising, asking questions about the nation of Victor's continued existence, not confirming he's no longer human. So that hook doesn't work for me.
Thankfully, there's a different one, a cliffhanger featuring Malware's master, whose creepy visual alone will bring me back next time. Said visual is the work of penciller Paul Pelletier, inkers Sandra Hope and Tony Kordos and colourist Guy Major and it's worth buying the book for.
The artists do good work throughout, giving us one of the best portrayals of Victor ever - strong, characterful, a hero. The costume's been tweaked a wee bit, most notably the chest symbol is now square rather than circular and the corny 'C' has gone. There's more plating, now his arms are covered as much as his legs; I'm not keen, if a guy's going by Cyborg we should be able to see machine and flesh. 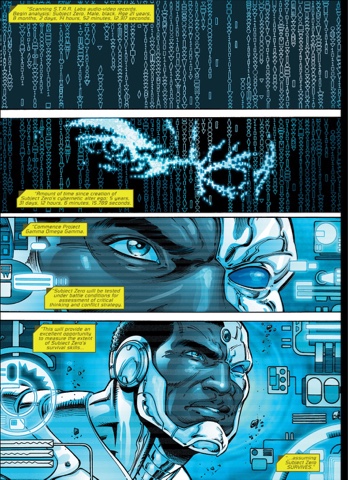 Semper paces the story well, with effective transitions between past and present. His dialogue isn't the most naturalistic, but heck, this is comics, nothing wrong with a bit of bombast. And if I love this line. 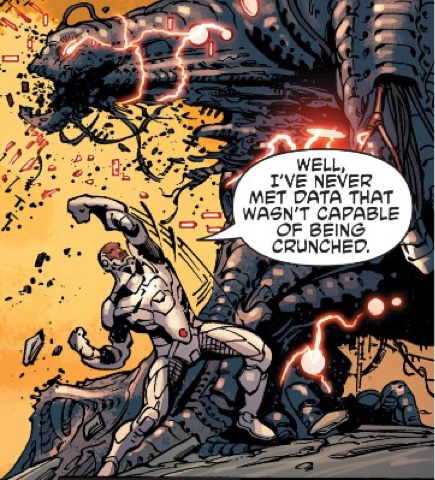 I like both covers a lot - Will Conrad and Ivan Nunes aims for intense, Carlos D'Andos goes for a cartoonier hero shot, and both work.
All in all, this is a decent first issue; I hope the 'Who is Cyborg?' line is canned soon, though - sure, his metal parts are his USP, but after four decades I'd rather we just took that as read and let him get on with some adventures.
Carlos D'Andos Cyborg: Rebirth #1 review DC Rebirth Guy Major Ivan Nunes John Semper Jr Paul Pelletier Sandra Hope Tony Kordos Will Conrad