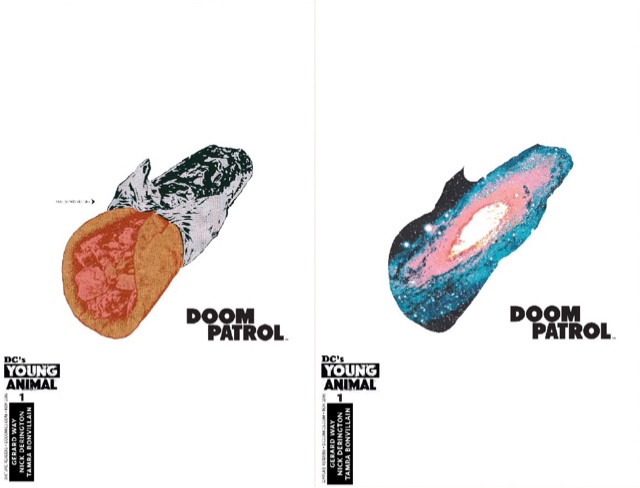 Well, this is something. What, I don't know - Doom Patrol #1 isn't your average superhero book. Still, when has the Doom Patrol ever not been skewed? OK, the Seventies revival was pretty straightforward stuff, but otherwise... This debut issue by Gerard Way and Nick Derington has the ordinary brushing against the uncanny with the big picture being far from clear.
The little picture sees Robotman Cliff Steele exploding from a microscopic world inside a gyro. It has paramedic Casey Brinke challenged over her whimsical stories by charming partner Sam. There's a mysterious ambulance dispatcher identified only as 'Em'. We see Niles Caulder, the Chief, apparently recording the songs of insects in a forest. There's a man from Oolong Island searching for Danny the Street. 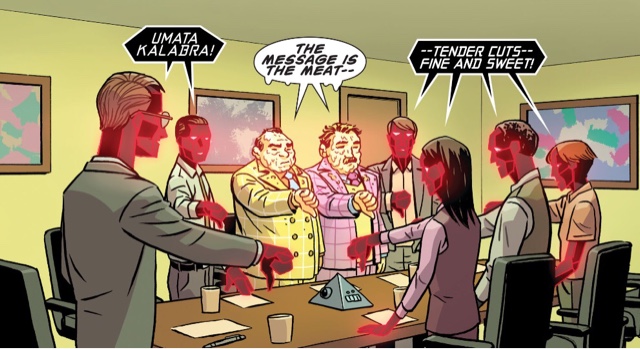 Otherworldly fast food merchants with their own interest in the teleporting transvestite terrace. The debut of tap dancing firecracker Terry None. A disturbing scene inside a throne room. 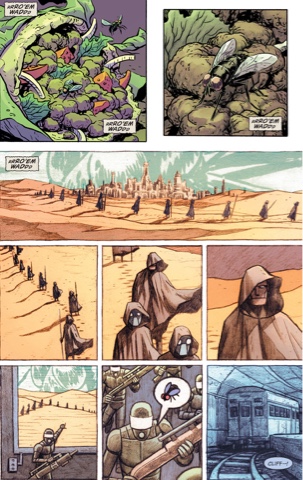 Occasionally, we see links between scenes, such as a buzzing fly, but I've no idea what it might mean. And I don't much mind, I just enjoyed the ride. Way's surprising decision to make our point of view character, Casey, anything but your average person pays off, I can see her belonging in a book named Doom Patrol - she's already wearing Robotman's jacket by issue's end. The various scenarios intrigued, especially as illustrated by Nick Derington - his default style is breezily attractive, while the softer, coloured pencil approach applied to Robotman's mini-adventure really tells us we're somewhere else. Plus, he makes Casey's cat, Lotion, super-adorable. 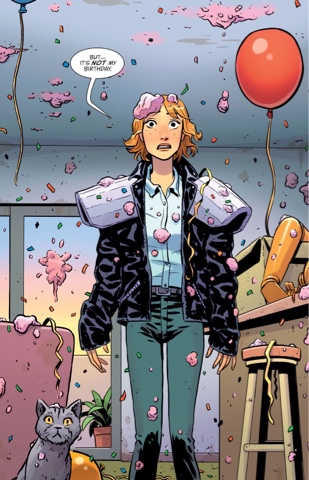 Todd Klein's character-appropriate lettering also contributes to this issue's success, as does the colour work of Tamra Bonvillain, bouncing as it does between cuddly and unsettling. The main cover, with its 'pull the sticker off the gyro' gimmick is clever but a little dull - I much prefer the Jaime Hernandez variant, a gorgeous team shot. 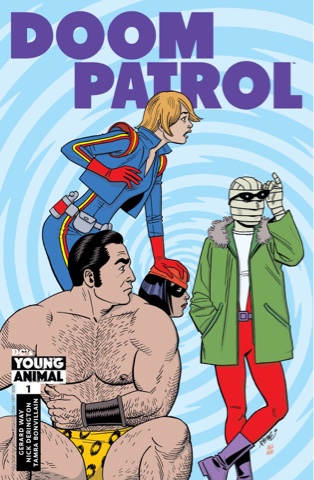 I wouldn't be surprised if there are a lot of things to be gleaned from this issue's story, things I'm just not wired to spot. Enlighten me, do! Meanwhile, I'm looking forward to the second issue with a massive great grin on my face.
Doom Patrol #1 review Gerald Way Jaime Hernandez Nick Derington Tamra Bonvillain Todd Klein Young Animal