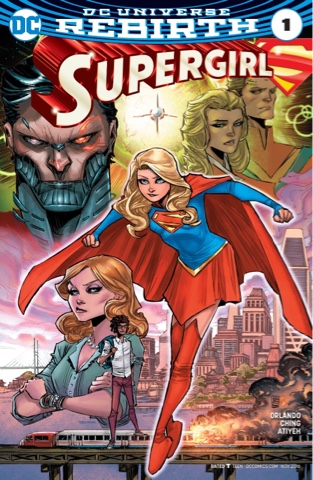 Finally, Supergirl has her own ongoing book again. And it's very, very good. Not perfect, but Steve Orlando's run on Midnighter proved him to be a smart writer, great with characterisation and longterm plotting, so I'm optimistic.
The issue opens with an All-Star Superman-style recap of Kara's origin before we meet her today, flying over Io, a moon of Jupiter (which I read as '10', block lettering being what it is). Back on Earth, new foster-mother Eliza Danvers is teaching her to drive, part of her efforts to get Supergirl to relate to Earth people in the guise of Kara Danvers. She's not having a good time. 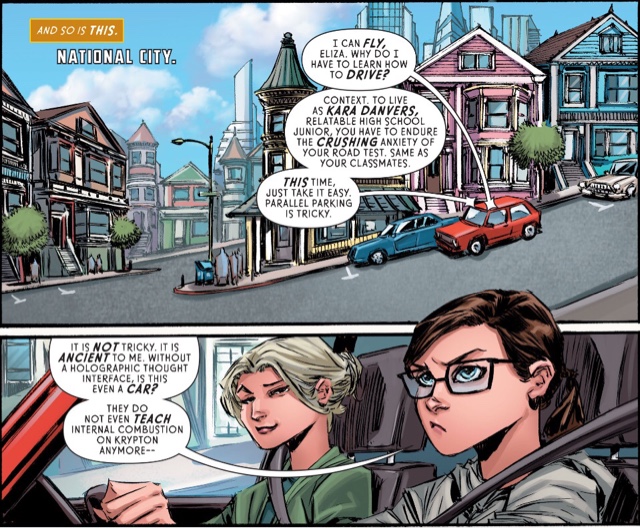 Later, at National City High Technical School, Kara isn't being welcomed with open arms by the teen geniuses around her. She has a chance to escape when a hi-tech robbery demands Supergirl's attention. And after she handles the rather cocky crew, Kara meets someone new. 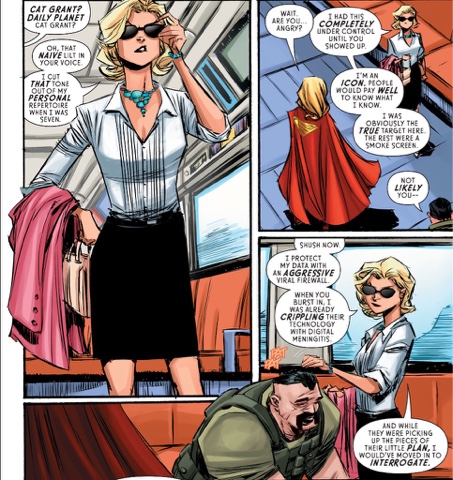 Then it's back to DEO Headquarters for some nagging from director Cameron Chase, who gets my favourite line of the issue. 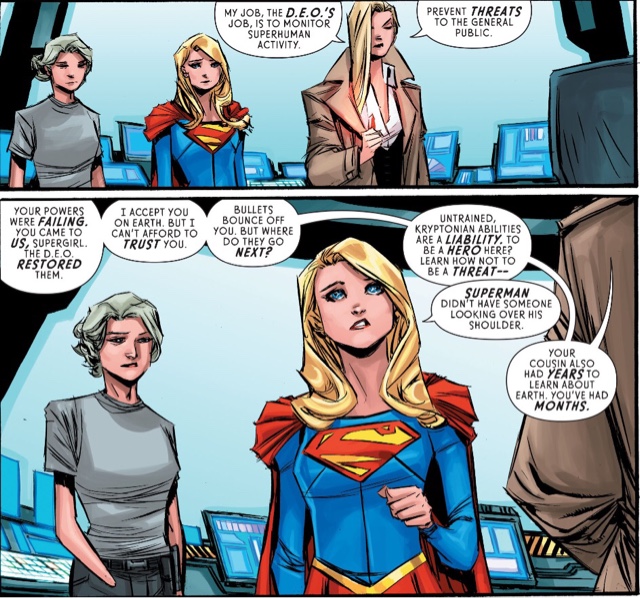 'Bullets bounce off you. But where do they go next?' Wow.
A meal with the Danvers gives us another great moment, as substitute dad Jeremiah tries hard to speak to Kara in Kryptonese. She could be more appreciative... 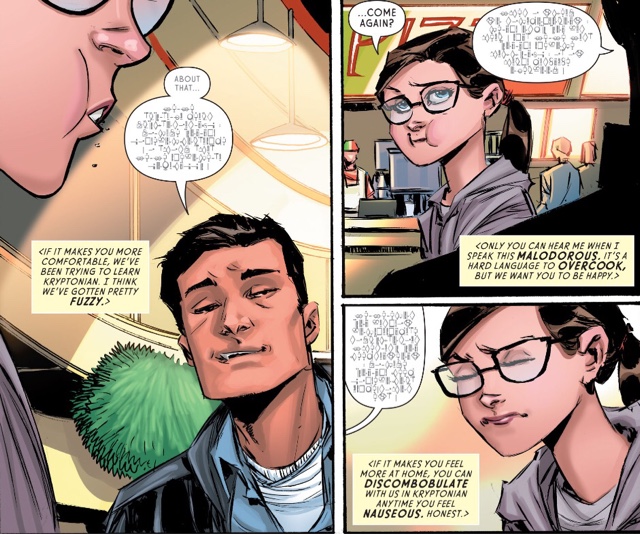 ... as she might be more generous about another gesture by the Danvers later in the issue. But no, she'd rather go off to the Fortress of Solitude for a spot of moping, before a cliffhanger comes-a-calling.
Interspersed with all this activity are flashbacks to Kara's life in Argo City where, it seems, mother Alura, had a nickname for her.

At least I hope it's a nickname, please don't retcon that 'orrible mouthful onto Supergirl!
Anyway, the flashbacks contrast with her life on Earth - once she was popular and comfortable in her surroundings, now she's a stranger in a strange land.
All of which makes for a great first issue of the New 52 Supergirl, but adding in her last series, this is about her fortieth. Writers Tony Bedard, Mike Johnson and Kate Perkins did some fine work showing us Kara coming to terms with her situation and learning to like life on Earth. But here she is, acting like a very pouty teenager all over again. I get that in her mind, it's about a year since she last saw her parents, and the emotions would be raw. And I also see that she's had her growing independence ripped from her by the DEO. But dang it, I was really enjoying Supergirl moving on with her life. Given that on the TV show which this new series echoes in parts, Kara is pretty relaxed on Earth, and forward looking, it's a shame this version has to be so dour.
As I said, though, I trust Orlando; with luck he'll soon have Kara be a happier bunny. I really should cut her some slack, what with Cousin Superman having just popped his clogs...
And meanwhile, there are all the other characters to enjoy - Orlando's Calista Flockhart-style Cat Grant is superb, Cameron Chase is fascinating and the Danvers are just lovely. The villain, I could care less about... I suppose I can name him, he's on the cover - it's the New 52 Cyborg Superman, the biggest misstep in Kara's new history. I was seriously hoping the 'my enemy, my father' bit had been wiped away by DC Rebirth, but here he is again, ready to make Kara even more miserable.
Accentuating the positive, Kara's confidence and mastery of her powers while taking out the cyber baddies is heartening; there's a line about legacy that's fun in a metafictive way; and I love that DEO agents Jeremiah and Eliza had a posting in a famous DC country. What I really want to know, though, is why Kara was around Jupiter - having a Krypto-style space romp?
Brian Ching's art grew on me throughout the issue. Preview pages of a very skinny Kara with a cuboid head didn't bode well, but after a few pages of getting used to the look, I began to like it more than dislike it. Certainly, Kara is too waif-like, the flying scenes especially need a bit more dynamism.

But the facial expressions are often superb, the body language of characters is telling and there's a real sense of place in San Fran... sorry, National City. And his Cyborg Superman is chilling.
There's nice colouring work from Mike Atiyeh, who tries to give Jeremiah a Dean Cain skin-tone, and typically good letters from Steve Wands. Bengal gives us a pleasant variant cover, while Ching and Atiyeh provide a nice film poster style main image - only the freakiness of Cat Grant lets it down (she's a lot better inside, honest).
So, a promising debut. I'd like to see a few tweaks, but I'm not the editor. Paul Kaminski is. And so are Andrew Marino and Eddie Berganza. And to all of them I say, nice job. Now, could you make Supergirl fortnightly?
Bengal Brian Ching DC Rebirth Mike Atiyeh Steve Orlando Steve Wands Supergirl #1 review