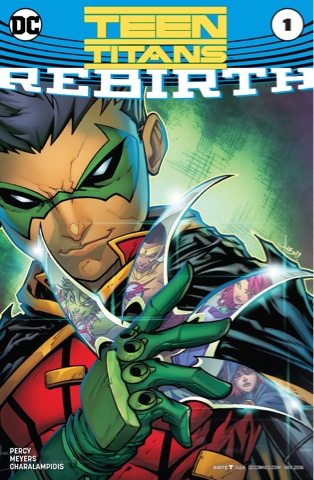 As gathering the team issues go you couldn't get more straightforward than this one. Someone is kidnapping teen heroes. Beast Boy is grabbed at a party he's thrown in California. Starfire is interrupted while trying to stop a slave operation in the Caribbean. Raven is trying to relax on an unconventional New York museum trip. And new Kid Flash Wally West II is learning to use his new powers on the besieged pavements of Central City.
As for who's grabbing Teen Titans, that's not much of a mystery, given that we've had plenty of interviews with writer Ben Percy and artist Jonboy Meyers telling us latest Robin - and only cover character not captured - Damian Wayne wants to be team leader. I have to say, he's not going about it in the most obviously sensible way...
Still, while the overall shape of the plot is predictable, the characterisation makes it worthwhile. Beast Boy is no longer able to keep his loneliness at bay with the recent loss of Red Robin Tim Drake. Starfire is on a mission to end slavery wherever she encounters it. Kid Flash is in an awful rush to grow up. As for Raven... 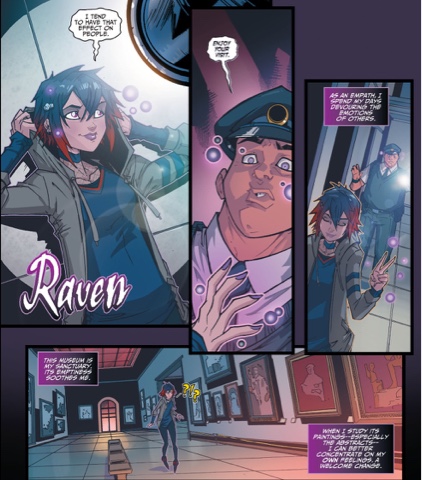 ...now that's art therapy. Percy tells us new things about the characters (and old, as Beast Boy's New 52 origin is dumped for the original) and gets a mystery going around why Damian has chosen these four heroes. They're powerful, and skilled, but have never all served together previously. Heck, Wally's never even been a Titan.
So yes, great individual characterisations that bode well for the dynamics now the young heroes have come together. Most are mourning Tim; how on Earth will the brattish, presumptuous, arrogant Damian persuade them to let him take Tim's place? Heck, Starfire has even pulled away from liberating slaves. 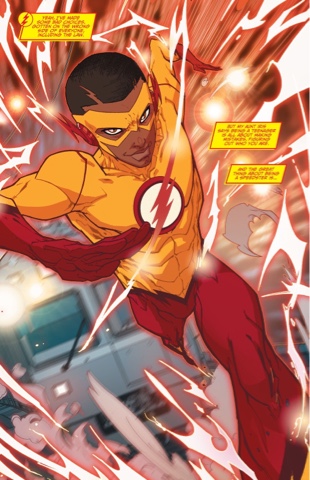 As for Meyers' art, its full of vibrancy. These kids are alive, and living in an exciting world. Meyers has redesigned the characters a tad, giving us such details as Raven's cool new hairdo - aided by colourist Jim Charalampidis - and Wally's splendidly thematic parting. As for Gar's big animal transformation, that's a page turn treat for you to discover for yourself.
I can't resist, though, showing you the most adorable green cat this week!

And is that Mr Mind? 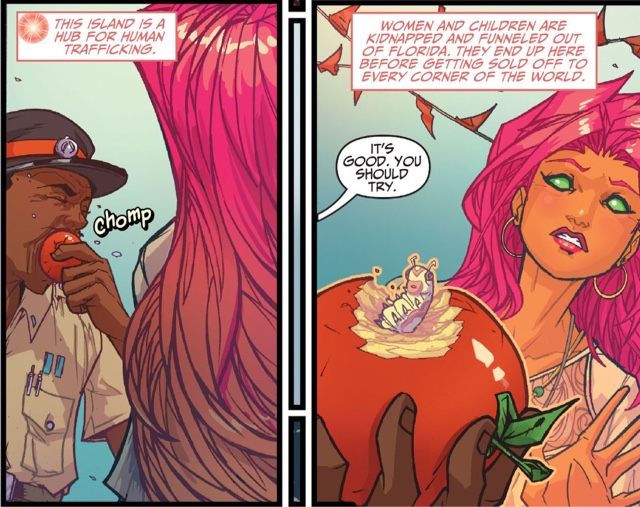 Probably not, but if it is, and it's revealed next issue, I'll be there to see it. Percy, Meyers and co have grabbed me with this breezy debut issue, which perfectly introduces the characters and kicks off the first arc in fine style.
Meyers' moody main cover is a winner, and Doc Shaner's lighter alternate equally good, each capturing an aspect of the book. Bring on the second issue!
DC Rebirth Doc Shaner Jim Charalampidis Jonboy Meyers Teen Titans: Rebirth #1 review Ben Percy