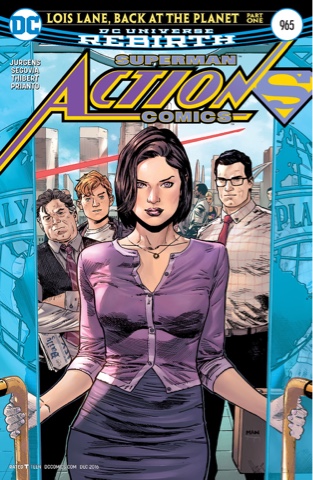 It's Lois Lane's first day at the Daily Planet and she's nervous.
This isn't the Lois who usually works at the Metropolis newspaper, it's the Lois from the pre-Flashpoint Earth - Mrs Superman, mother of new Superboy Jon and supremely adept journalist. But to get the story she's after, Lois must fool a team of crack reporters into believing she's their Lois. Her hair's a different colour, she's several years older, but yes, she's having a go.
(Then again, the Planet staff generally can't get their heads around the notion of glasses-on, glasses-off...)
Soon, a gauntlet of colleagues gathers and Lois finds comfort in an unexpected place. 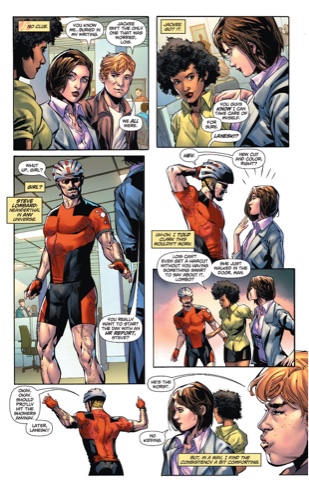 And is she checking out Steve's bottom up there. Oh well, she's married, not dead.
A flashback assures us that this Lois isn't being so arrogant, so cold as to attempt to steal the career of her younger counterpart. 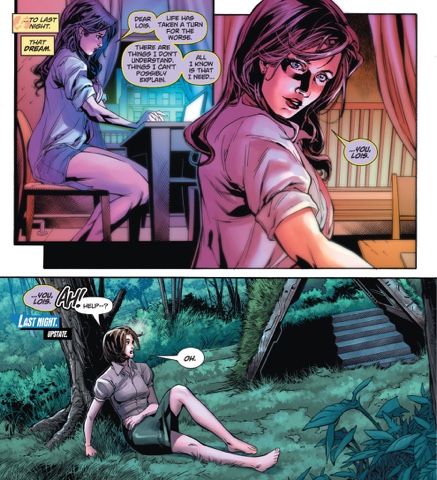 Which is great, as the New 52 Lois doesn't deserve to be shunted aside, forgotten. The rest of the issue shows us how the older Lois decided, with Clark, to see if she can fool people just long enough to get in and out of her counterpart's office computer to find a lead that's been left for her. As well as Jimmy, Steve, Jackee, Perry White and new paper owner Lex Luthor, she meets someone I certainly wasn't expecting to see... 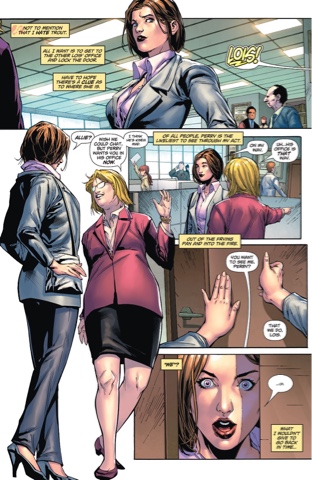 If you were reading Superman during the Nineties you'll likely remember Allie, the Daily Planet office girl - if you don't, seek out Adventures of Superman #462 on ComiXology,  it's a Christmas cracker written by Roger Stern and pencilled by Dan Jurgens. The latter is writing this issue, and it's another compelling instalment of the mystery we've been getting since Action Comics went fortnightly. Is the New 52 Superman really dead? Who's this apparently human Clark Kent who's shown up? And now, what's happened to this Earth's Lois (if you've been following Phil Jimenez's excellent Superwoman book - new issue this week - you'll have an idea)?
Jurgens writes a great Lois - smart, sassy but never overconfident. She's always analysing, dealing with whatever life throws at her. The mystery of younger Lois gives her the excuse she needs to get her reporter's hat on again and have the kind of risk-taking day that was once her bread and butter. 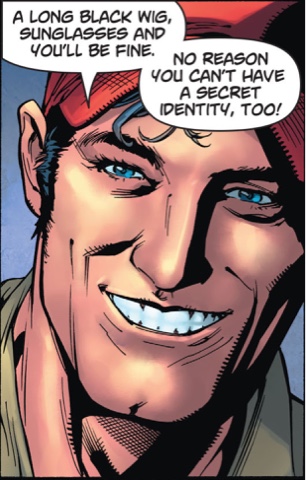 Husband Clark is also a delight, strong as every, but with a twinkle we rarely see, while Jon gets a nice moment of connection with his mom. 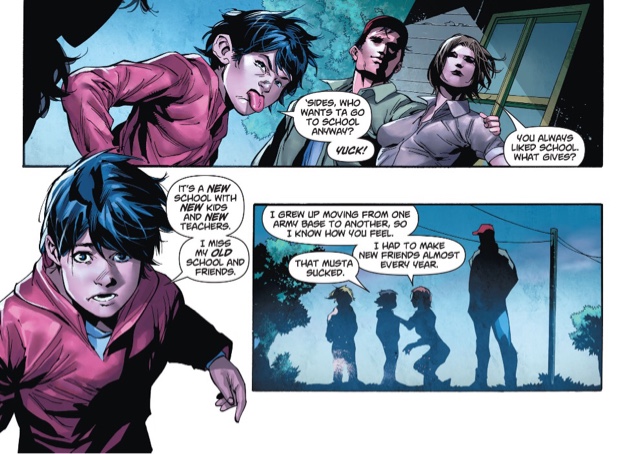 The only thing missing from this script is an acknowledgment of another Jon - Jonathan Carroll, New 52 Lois' live-in boyfriend. It's pretty safe to say he'd notice the difference between the two women. I did think the helmeted Steve Lombard was going to be him, I'm sure Steve's been a bit chubby for years, and he was never blond, but no. And look, there's recent Steve's tache, which I missed at first. Jonathan was never properly written out and his non-appearance begs questions. But Jurgens isn't one to leave loose ends dangling, so perhaps he'll appear next issue.
I am glad to see the Planet's newest reporter Jackee on panel, she was introduced by Geoff Johns during his run, had about three tiny appearances and vanished - the more supporting cast members, the merrier. 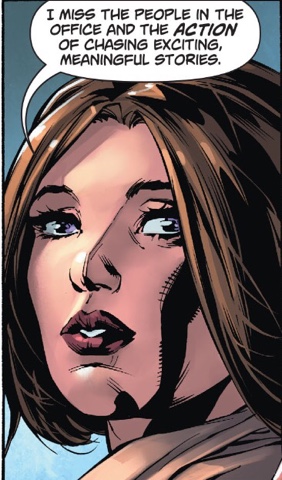 Oh, and dig the word letterer Dave Sharpe has to emphasise - we see what you did there, Dan Jurgens.
This issue's penciller, Stephen Segovia, provides some lovely character work, his Lois Lane is splendidly expressive, while the other characters all look classic. Segovia is a fine storyteller - take this busy splash page, with its upward angle on proceedings, for example - and I'm glad he's part of the artistic rotation. 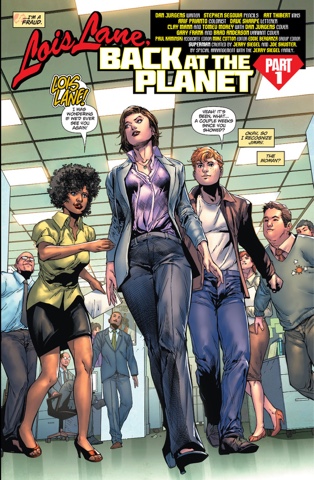 A surprise is the inker's name in the credits box - Art Thibert, who like Jurgens was a stalwart of the 'Triangle era' Superman books - he inked Jurgens on Superman #462. His work is as strong as ever, so more please. Sharpe's letters are spot-on throughout, while Arif Prianto's colours are suitably naturalistic for a day in the life issue. 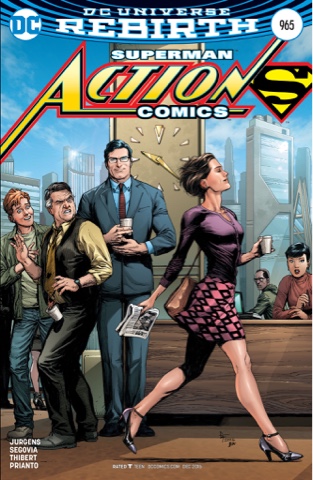 Add in not one, but two superb takes on Lois's Planet return/debut, by artist Clay Mann and colourist Tomeu Morey (main) and Gary Frank and Brad Anderson (variant) and you have another super-solid Superman story, but one putting Lois at the forefront, something we've waited too long to see. After three months of the DC Rebirth initiative, I'm still slapping my forehead at how consistently entertaining the Superman books are - I may have tweety birds circling my bonce, but I'm happy!
Action Comics #965 review Arif Prianto Art Thibert Brad Anderson Clay Mann Dan Jurgens Gary Frank Rob Leigh Stephen Segovia Tomeu Morey