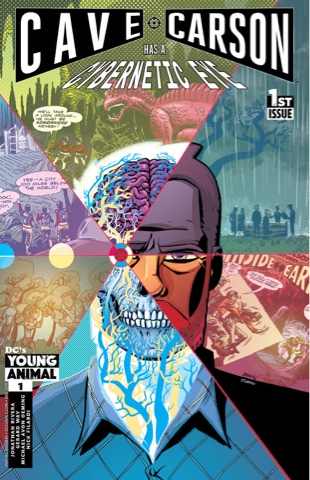 Cave Carson is mourning his wife Eileen. Their daughter Chloe is getting on with college, her time adventuring inside the earth with her parents long behind her. Cave's a lost soul. He has work advising the EBX company on the next generation of the Mighty Mole - the underground exploration vehicle he once stole from them - and training the young people who'll use it, but there's a void he can't fill. 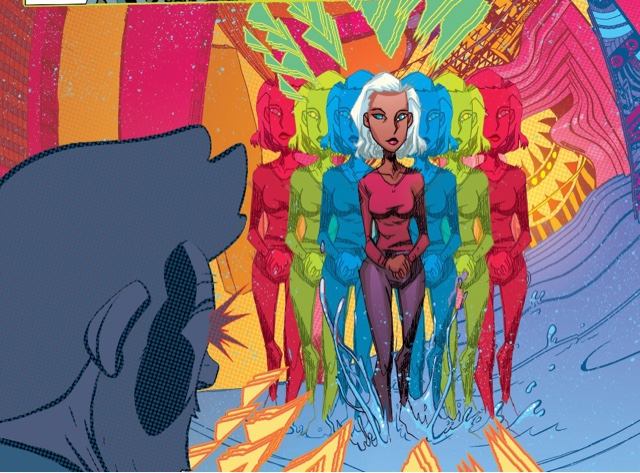 Distraction comes in the form of a puzzle - the strange visions he's been seeing. You see, Cave Carson has a cybernetic eye. It scans everything, all the time, but now it's also giving him crazy images, ones linked to his past. Without access to a Mighty Mole, he can't explore weird realms underground, but he may be descending into madness. Can Doc Will Magnus, inventor of the Metal Men, help? 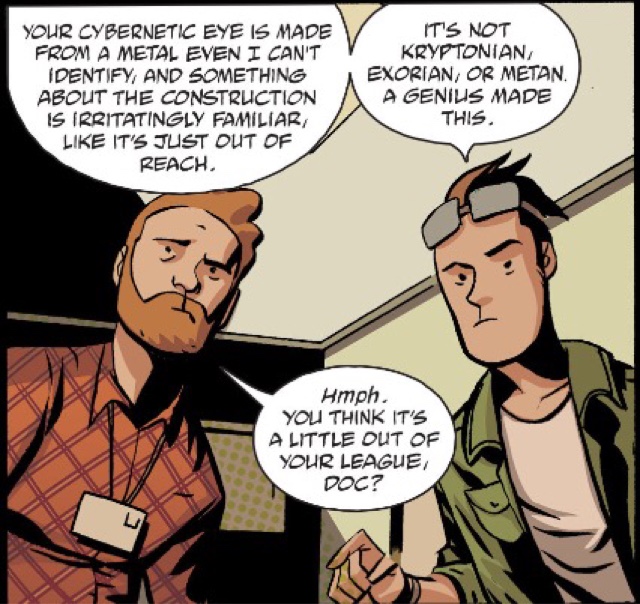 And after that, things get really strange, creature feature crazy. The book ends not on a cliffhanger, but on a big surprise, as one of DC's more dogged characters prepares to help Cave out...
Nope, I'm not saying! The reveal is too goofy, and all the better for writers Gerard Way and Jon Rivera not having signalled that there's going to be a reveal. It's nicely sold by artist Michael Avon Oeming, whose simple, expressive people are very appealing, from hangdog Cave to cute Chloe to the naked guy on the final page. 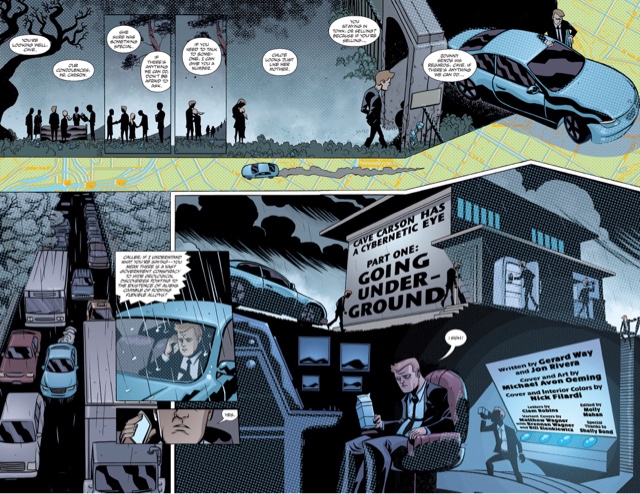 Oeming's action scene is impressive, a kinetic nightmare, but my favourite composition is the credits spread, in which we follow Cave from Eileen's funeral to his lonely home, zigzagging across and down the page. As with the rest of the book, it's nicely coloured by Nick Filardi who, appropriately, uses a lot of earth tones.
This is the only page where the art doesn't quite work for me. 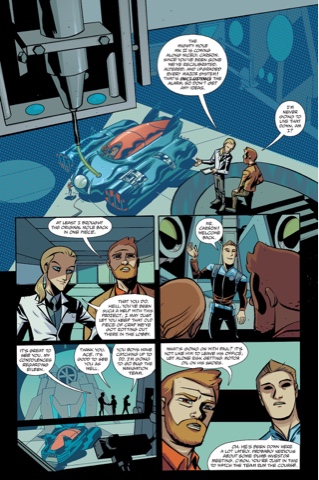 Is Paul the tiny figure in front of the Mole, beside another tiny figure who turns out to be someone named Ace? A single close-up to properly establish his presence seems needed, before Cave questions it. Maybe there's a reason we can't be shown this Paul person, but it pulled me out of the book.

Never mind the cybernetic eye, you know what else Cave Carson has? Super-speedy beard growth. Here he is at his pal's garage, then at work a day later - he goes from stubble to luxurious growth in the space of one sleep. Jealous.
I liked this story, Going Underground (that may be black humour, given it begins with Eileen's burial), a lot. It looks like nothing else DC publishes, the characters intrigue me, there's a fun mystery - it seems even the man himself doesn't know why Cave Carson Has a Cybernetic Eye - and it uses the phrase 'bootleg Boom Tube'. 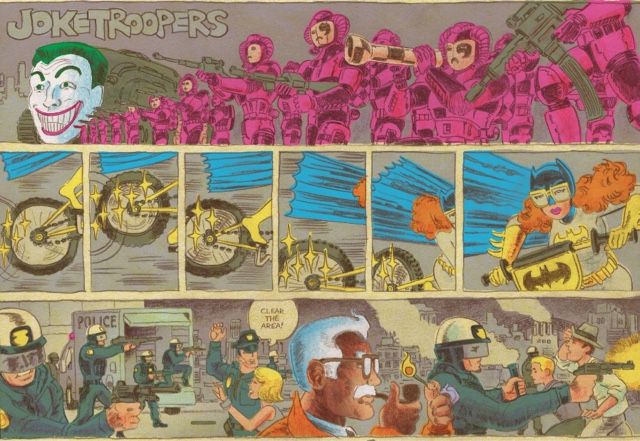 As well as Cave's story, there's a three-page Super Powers strip involving the Wonder Twins, the Joker and Batgirl on a pushbike. Written and drawn by Tom Scioli, it looks like something from DC's wonderful Bizarro Comics books. I've never seen the Super Powers cartoons, so I've no idea what the connection is, but I want more. 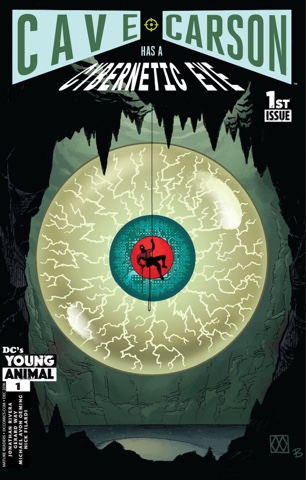 Buy this digitally and feast your eyes, cybernetic or otherwise, on all three covers - the regular by Oeming and Filardi, or the variants by Matt and Brennan Wagner, and Bill Sienkiewicz (which I'm not showing as it's rather spoilertastic). They're all rather terrific, and I really like the way the logo homages the original Inside Earth masthead.
This is the third Young Animal title I've read, and my favourite so far. And Cave's not even ventured into a single subterranean kingdom. I suspect that when he does it'll be rather special.
Bill Sienkiewicz Brennan Wagner Cave Carson Has a Cybernetic Eye #1 review Gerard Way Jon Rivera Matt Wagner Michael Avon Oeming Nick Filardi Young Animal