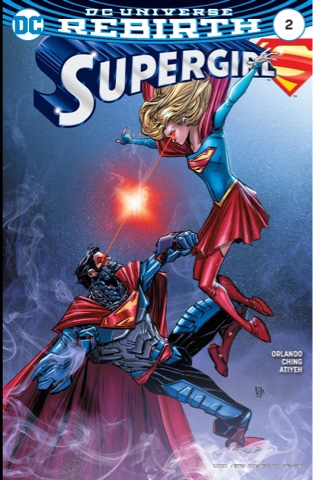 Supergirl has fought the Cyborg Superman previously, but now things are different. He's claiming to be her father Zor-El, whom she believes is dead. He wants to talk to her about raising her lost home, Argo City, to life again, but very soon they're fighting, and 'Cyborg Superman' blows up.

Leaving the mystery to percolate, Kara calls into the National City prison, nicknamed the Ditch, to see how the chief train robber she recently captured is doing. He's suitably surprised, but she really cares about this stranger's welfare. 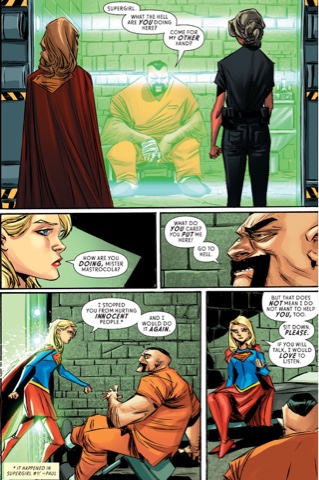 Back in National City, there's a special guest at Kara Danvers's School for Science Whizzes. 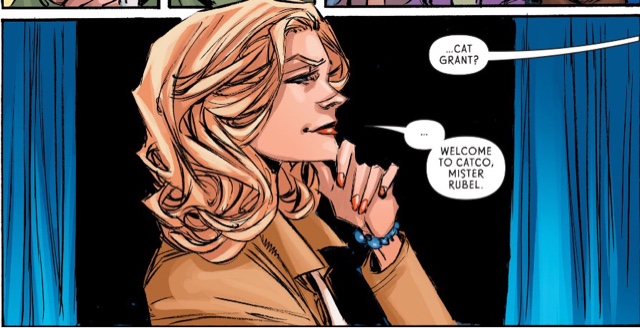 Kara's hopes of winning a place on the CatCo Young Innovators programme look to have wilted on the vine when school rival Ben Rubel stops her speaking and impresses Cat. But Cat's done her research and believes Kara deserves another chance, via an unconventional interview.

Back home with foster parents/superspy handlers the Danvers, Kara is contacted by the Man Who Would Be Zor-El. He has an offer for her, and she just might be about to take it...

I mentioned my problems with Cyborg Superman's return last month, but solicitations tell me he's here for awhile so there's no point harping on. Writer Steve Orlando makes the way he creeps into Kara's psyche believable, without lessening his creepiness. Before that, the interaction with Ben - a youth who, in trying too hard, steps on others the way he's supposedly been trampled upon - shows that Kara's not planning to act the milksop. 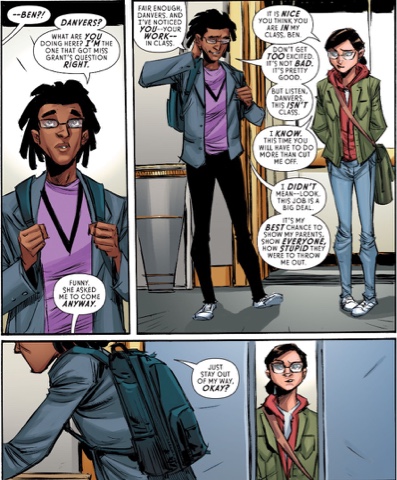 Eliza Danvers is as warm and sweet as Ben is cold and sour and I love how she tries to connect with Kara. And Orlando writes the most brilliant Cat Grant, brusque yet insightful, genuinely wanting to help young talent. 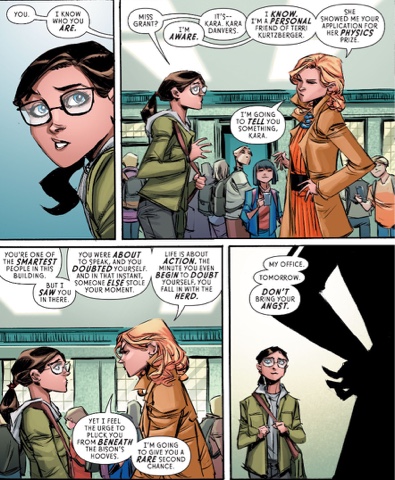 As for the prison visiting, I'm curious as to where Orlando is going with this - I think it's great that Kara wants to help people change, but is it healthy for a teenager to be hanging around people who, odds are, are just pretty awful humans. There's a difference between a young person taking a misstep and hardened criminals.

It would be easier to take if artist Brian Ching didn't draw her so young looking. Still while the peg doll style doesn't appeal to me hugely, overall, it's fine. The Cat Grant scenes are actually really effective, with Ching bringing a genuine sense of Calista Flockhart to the character. I do hope, though, that Ching eventually realises that a lot of us are reading on tablets, and we zoom in on panels, making moments like this stand out.

Just a little line or blob to indicate a mouth, and a watch kept on the wonkiness, that's all I ask.

The fight scene in the Fortress between Kara and Cyborg Superman needs more oomph, it's a little understated - figures that aren't teeny-tiny would be a start. What should have been the big moment lacks dynamism, that Blackhawk plane looks more like it's levitating than being hurled by Kara at Zor-El. 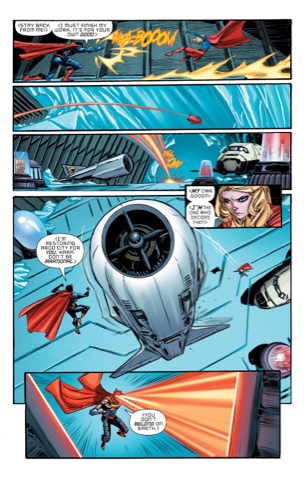 I may be a little grumpy here. The return of the ill-conceived Cyborg Superman, Kara constantly looking sad or bad-tempered... Supergirl was in such a good place at the close of the last run that it feels we've taken far too many steps backwards. I really hope Orlando cheers her up soon - yes, in Kara's mind the loss of Argo and her family is recent, but she's been working through it; maybe this storyline will act as a catharsis and have Kara conclude that the best way to pay tribute to her world is to embrace her new one, live in the now.

Back to the positives: Mike Atiyeh's colouring complements Ching's illustrations, especially in the moodier moments - the final page is terrific. We get a hint as to how Kara instantly colours her hair. 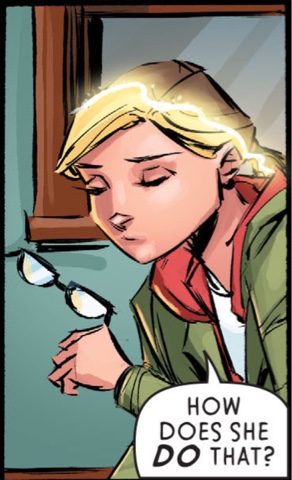 And Steve Wands does great work with italicisation, his lettering helps sell the script. The main cover by Ching and Atiyeh is effective, though I wish Kara had some bones in her thighs. The Bengal variant is a lovely spin on a classic theme. So, two issues in and I'm enjoying Supergirl, but not as much as I'd like. Orlando, Ching and co are certainly capturing a little of the TV show, and doing a fine job of introducing characters and developing Kara's new environment. It could just be that this isn't a book made for me - the vibe is determinedly Young Adult and I'm an old git. But I'm a Supergirl lifer, so sticking around to cheer the creative team - and Kara - on.
Bengal Brian Ching Cat Grant DC Rebirth Mike Atiyeh Steve Orlando Steve Wands Supergirl #2 review