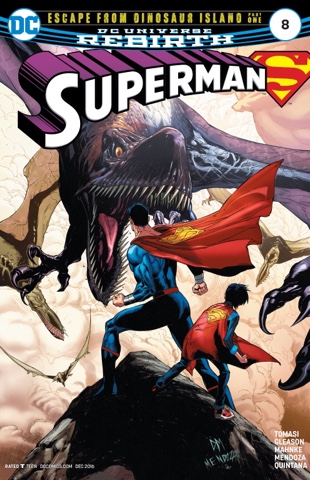 Superman and Son the story arc is over but Superman and Son the adventure continues, as Clark and Jon are transported to Dinosaur Island. Exactly how, they don't know, it was a quiet enough father and son garden shed bonding session which, when you're Superman and Son, means you're in the Fortress of Solitude. Building a mini-UFO for a school science project. With a super dog at your side. 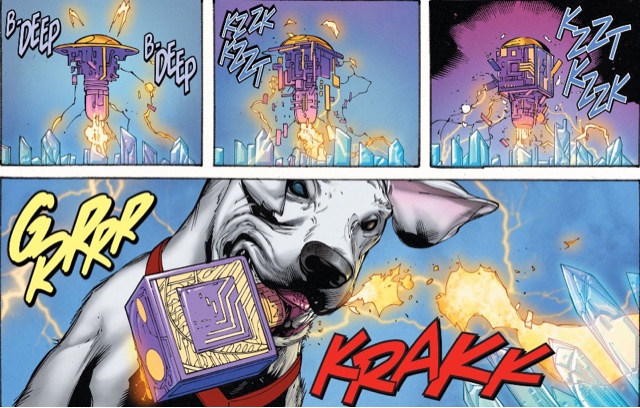 When the super-drone takes off without having been programmed, Krypto gives chase, only for something even odder to happen... the UFO transforms into what looks, for all the world, like a Mother Box.
As in Apokolips tech with teleportation capability.
And in two shakes of Krypto's tail the trio are on Dinosaur Island, one of DC Earth's more exotic locations. They don't know that's where they are, but they get clues... 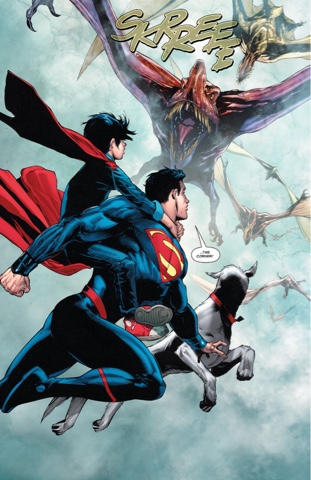 Cue page after page of highly entertaining encounters between super-guys - that includes Krypto, of course - and prehistoric predators. One scenario is all too familiar. 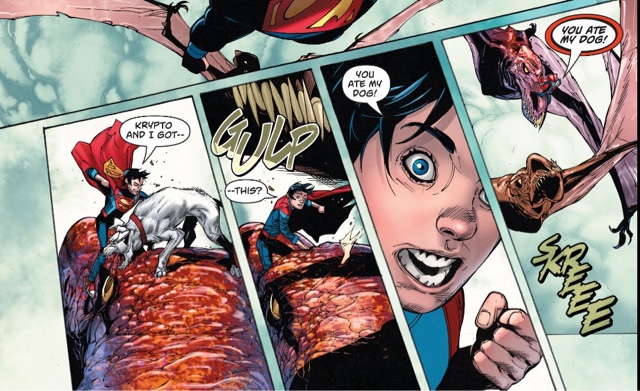 By the end of the issue the book reflects one of DC's most famous mini-series, and pays tribute to a much-loved, much-missed comics creator.
Writers Peter J Tomasi and Patrick Gleason, and artists Doug Mahnke and Jaime Mendoza, have produced a Boys' Own adventure that's good enough to stand on its own. Add in the unexpected poignancy and it becomes extra-special. The relationship between Clark and Jon is lovely to share, with great moments like this dotted throughout. 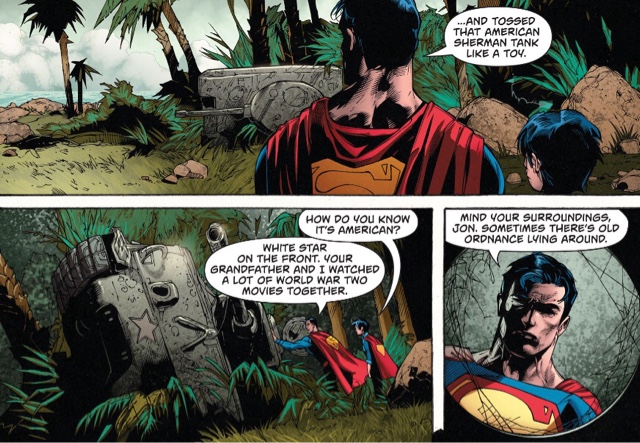 Who knew Clark was a bit of a war movie buff? And who knows what's going on with Jon, is he dreaming of other continuities? 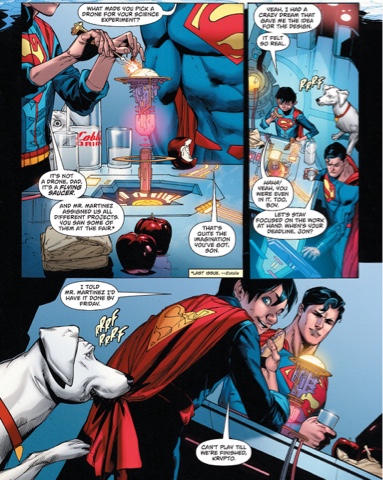 I don't recognise the UFO design, I'd not be surprised if it was a reference to some old Baby Kal rocket. 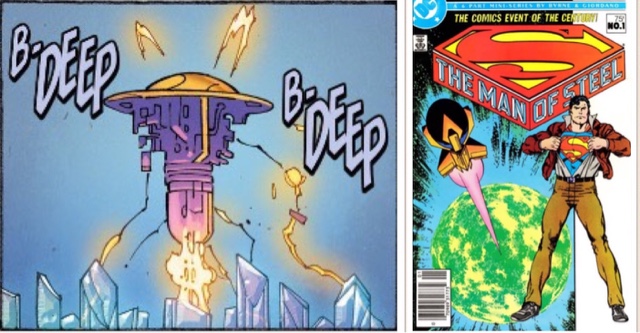 The story is smartly paced, with characterisation and action balanced splendidly. Mahnke has years of experience pencilling various versions of Superman and it shows: every line is perfectly placed to bring us a classic looking hero, the most powerful man on the planet - but always a man we can relate to. And Jon takes after Clark and mom Lois - who's not around, or even mentioned this issue, hopefully she'll get a big fat spotlight story soon - as he tries to balance Clark's caution with Mom's impetuosity.
Krypto, as usual, is a delight. I admit I'm old enough to miss him thinking his dialogue, but Mahnke doesn't miss an opportunity to show his personality. Just look at that pooch staring past the milk as Jon is super-soldering. Along with the apples, it's a nice 'down home' touch to contrast with all that Kryptonian super-science.
And goodness, but Mahnke, backed up by the strong, expressive inks of Mendoza and dramatic colours of Wil Quintana, gives us a great dinosaur.
Credit, too, to letterer Rob Leigh, for his usual great job on the narrative and extra-value title lettering, which you'll find on the final page. 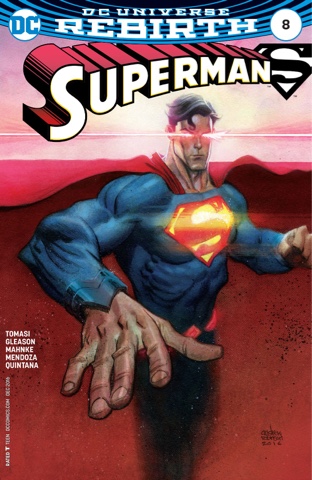 Mahnke, Mendoza and Quinata's super cover is a terrific taster for what's to come, while Andrew Robinson's variant is surprisingly creepy - maybe a nod to this month's Hallowe'en?
This isn't a done-in-one, with the mysteries continuing in a fortnight. And that's fine by me, I'm loving the adventures of Superman. And son. And dog.
And ruddy great dinosaurs!
Andrew Robinson Doug Mahnke Jaime Mendoza Patrick Gleason Peter J Tomasi Rob Leigh Superman #8 review Wil Quintana