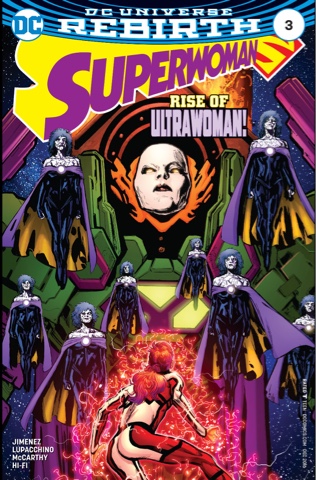 Metropolis is under attack from the Atomic Skull. Lex Luthor is under attack from his sister. Metropolis has Superwoman, Steel and Natasha Irons to defend it. Lex has no one...
There's a lot going on in Superwoman #3, but that's what we've come to expect, as writer Phil Jimenez mines the Superman Legend for all it's worth to bring us another chapter in Lana Lang's journey to become a heroine worthy of the S-shield she wears.
And Lana's not just trying to live up to Superman, but Lois Lane, who was her sister Superwoman until her new powers killed her. Lana is fully expecting to die too, meaning she's not in a great place. She's already taking some dodgy drugs to deal with the anxiety that landed after best friend Clark, the New 52 Superman, turned to dust, and now she's having nose bleeds... it could be that she's not on the verge of an extinction linked to the powers she and Lois inherited, but that the anti-anxiety drugs are behind her weakness. The pills are helping her emotionally, but physically? Who knows? 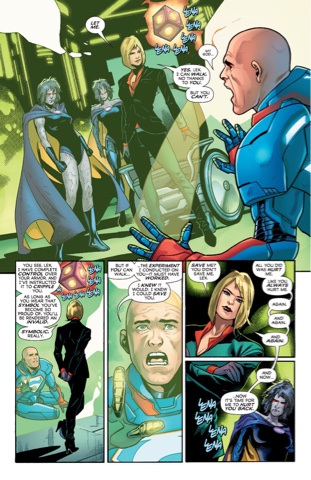 Much of this issue is Lena Luthor, who's evolved from a comatose state, into something frightening - more than human, yet inhuman - explaining to brother Lex why she hates him. She blames him for wrecking her life, in an echo of Silver Age Lex's hair-related hatred of Superman. It's a tale of super-energy, and Bizarro clones, there's a Mother Box in there, and New Superman's Dr Omen... it's a complicated stew, but this is Metropolis, I can buy it.
One of the biggest kicks I got this time came after I patted myself on the back for noticing rubbish post-Crisis villain Skyhook in a prison scene, only to have someone even more obscure appear... 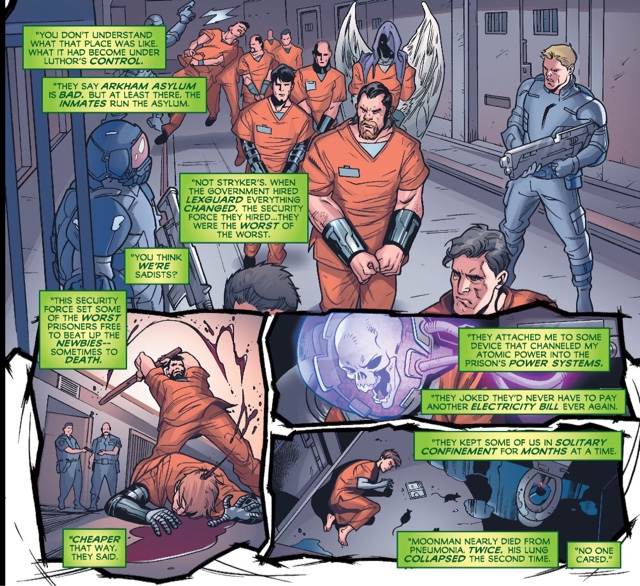 Moonman! Now there's a deep cut, he debuted in World's Finest Comics #98, back in the Palaeolithic era... it'd be ruddy amazing were Jimenez to bring him back properly.
The narrator of the flashback is Atomic Skull, Bronze Age Superman badguy who gets a shot at redemption as Lana, John Henry, Natasha and the latter's engineer friend Leti bid to turn the power back on in Metropolis. But will he take it?
Doing what's right when it's tough is a bit of a theme this time, with Lana striving to find her best self as a mountain of pressure bears down upon her. That she manages to do so isn't to do with the late Superman so much as the recently departed Lois.

I really appreciate Jimenez ensuring Lois is a big presence in this series, even though she's dead. Or 'dead', I don't really know. And while inspiration comes from Lois, it's Lana who's choosing to take it - she's the hero of her own story.
The excellent Jimenez doesn't pencil this month - given the level of detail he puts into an issue, that's fair enough - but alternate artist Emanuela Lupacchino is nothing to sniff at. The former Supergirl and Starfire penciler brings her storytelling sensibility and sense of character to Jimenez' script and, aided by inker Ray McCarthy, makes it sing. The layouts are clear, the body language terrific and the action awesome. 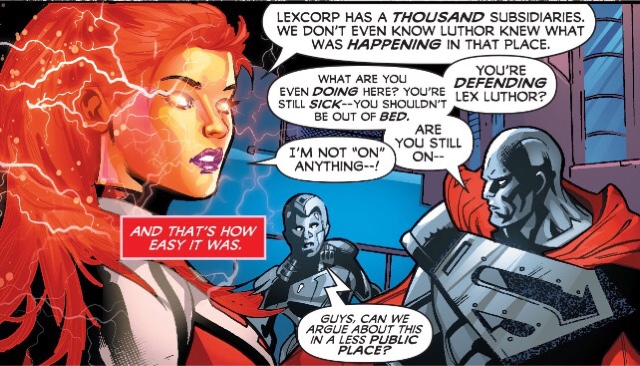 I especially like the use of angled viewpoints, and their gorgeous - but not otherworldly - take on Lana. When Lana is the energy-crackling Superwoman, mind, colourist Hi-Fi helps make her look truly out-of-this-world, a real force to be reckoned with. And with a script this generously dense, it's safe to say letterer Dave Sharpe earns his wages.
Other things to like this issue include Steel's unerring sense of right and wrong, Daily Star editor George Taylor's 'cute little British accent' and Lana's apparent lack of modesty... 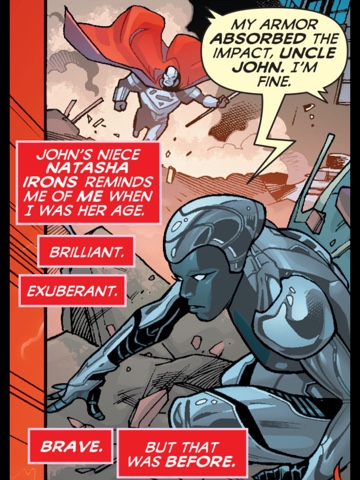 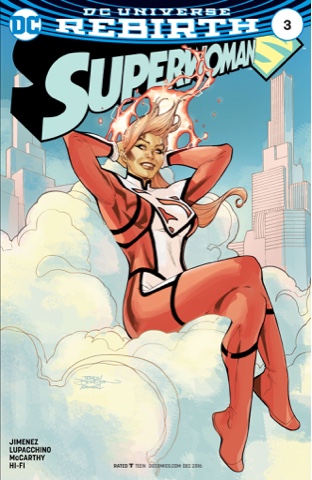 Terry and Rachel Dodson are back for another dreamy cover variant, let's hope Lana does eventually get to have a moment like this, luxuriating on a low cloud by the redesigned LexCorp tower. The regular, cover, meanwhile, is a wonderfully eerie Jimenez creation, coloured by Jeromy Cox.
So far as superior superhero soap goes, Superwoman is up there with the best, a dramatic, well-wrought tale starring characters I can't help caring about. Even Lex Luthor.
Emanuela Lupacchino Hi-Fi Phil Jimenez Ray McCarthy Superwoman #3 review