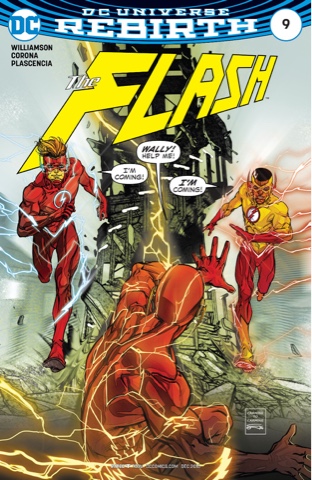 As the cover homage to the legendary Flash #123 makes clear, this issue is a tale of two Wally Wests. There's the first Wally, who went from Kid Flash to Flash, and the younger Wally, the new Kid Flash
So far as Wally Jr is concerned, mind, he's the original, reality tinkering by persons unknown having removed the older Wally from history and memories, along with about a decade of history. Which is why he leaves his Titans partners to visit Central City's Flash, Barry Allen, and winds up encountering Wally.
Before that we get a playful opening as Barry and Wally Jr see their planned movie night with Iris West abandoned when an emergency requires their attention; she as a reporter, they as heroes. Instead of the usual Barry narration - a conceit nicked from Wally Sr when he was DC's featured Flash - Wally Jr gives us his perspective. We hear how he badly wants the Flash to like him, and how he wants him to share his secret identity, as Barry tries to teach him how best to handle a bridge cracking in two. That's when the elder Wally arrives to show how it's done. 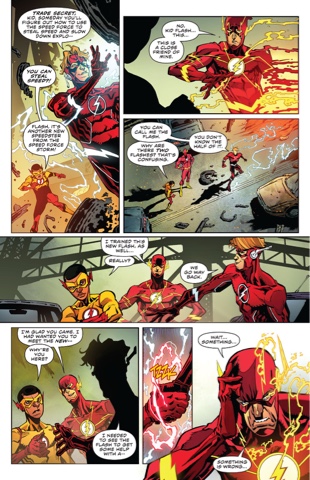 While Wally Sr impresses with his mastery of the Speed Force, Wally Jr is rankled by the older Flash's obvious close relationship with Barry, having no idea the ginger Flash is his cousin.
Barry, meanwhile, is suddenly being pulled into a very depressing version of the Speed Force, and one-sided rivalry is set aside as the two Wallies must work together to help their friend.
Along the way Barry gives up a secret - Reverse-Flash Daniel West isn't Wally Jr's uncle, he's his dad, and the news sparks all sorts of confusing feelings. This leads to a satisfying conversation between the two Wallies, with commonalities explored, knowledge shared... and mysteries left to brew. 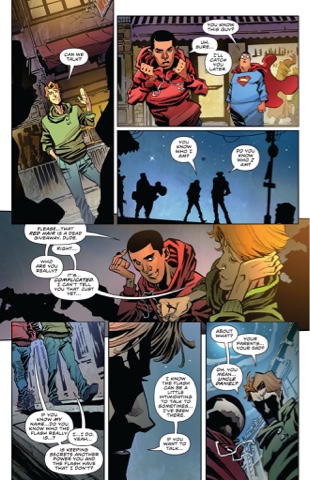 Young Wally is hurt because everyone seems to be keeping secrets from him, as elder Wally - in one sense, an otherworldly version of him - realises he can't let Kid Flash know they're all pawns in a cosmic conspiracy.  Oh yes, and we get Chunk from the superb Bill Loebs run, slimmer, younger and a pal of young Wally. I wonder what plans writer Joshua Williamson has for him.
Williamson is helming a terrific superhero series, balancing super-speed action and close character work, while feeding into the bigger DC Rebirth mystery. The script has all the spark the first meeting of the Wallys deserves, and while artist Jorge Corona's style is a tad wonky at times, it's all about dynamism, the storytelling is sound and the result is oddly likeable (it's such a shame about the elder Wally's hideous costume, though).
And then there's the final page surprise, one of those occasional comic book moments that has olde tyme readers like me whooping with joy. And I wouldn't dream of spoiling it.
The only off-note is another mention of Barry having taught Wally about the Speed Force when the opposite is true. I don't care if reality mangling makes Barry believe this, Wally has been outside time and should know the truth. 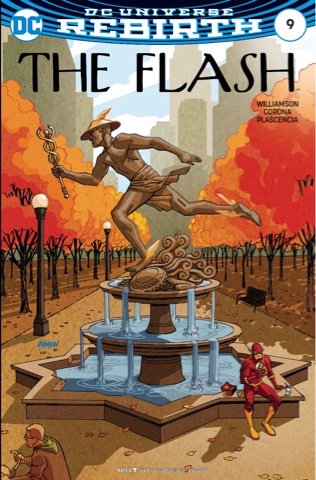 The regular cover by Carmine Di Giandomenico is, as mentioned earlier, a nice tribute, perfect for an issue entitled Kid Flash of Two Worlds, while Dave Johnson's variant is a stunning study of Barry in a quieter moment. As for whether it's connected to the issue...
If you're a fan of the Flash - any version - don't miss this issue. It may not wind up as important as Flash #123 but it's a great done-in-one that feeds into a much larger whole.
Carmine Di Giandomenico Dave Johnson DC Rebirth Jorge Corono Josh Williamson The Flash #9 review