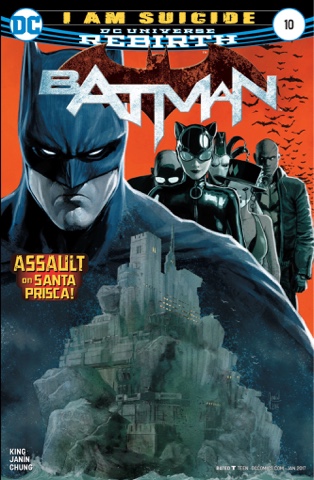 Batman is flying over the South American state of Santa Prisca. He wants the villainous Bane to hand over Psycho Pirate so he can undo mental damage done to young superheroine Gotham Girl. But Bane isn't having it and with the resources of an entire country at his command, the Batplane is blown out of the sky and its pilot captured. 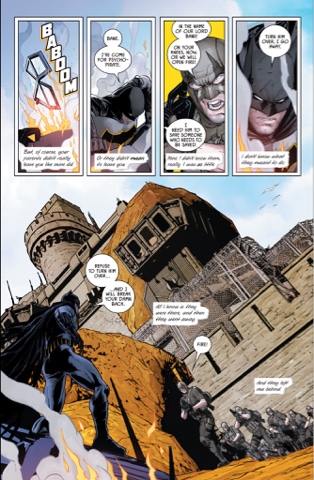 It's fair to say Batman is pretty single minded in part 2 of the I am Suicide story, repeating the same lines of dialogue again and again. Is it some kind of mind trick to keep him focused? It's not like he's needed such a thing previously.

As we watch Batman basically attempt to invade a sovereign state, there's a separate narration over the top, a voiceover. It's Selina Kyle relating her tragic past... and it doesn't jibe with any Catwoman origin I know. 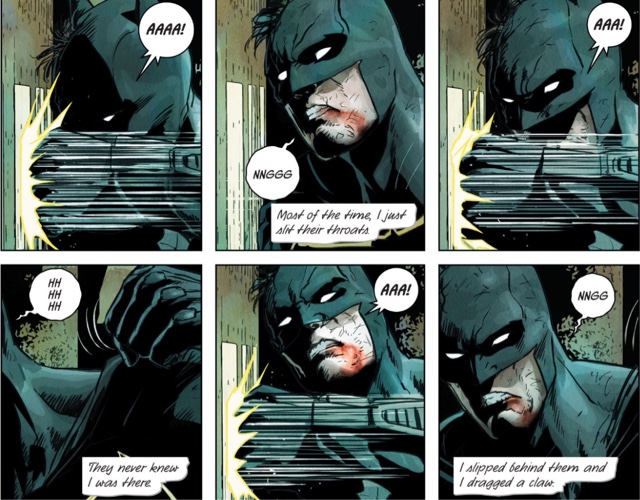 The real shocker is that it inserts into Selina's backstory more than 200 murders. While Catwoman has occasionally been seen to kill over her seven-plus decades, such stories are aberrations, quickly shifted into a dark non-canonic corner. Her refusal to murder has been a big part of her character. My first reaction is that writer Tom King has made an appalling error in making Selina a throat-slitting angel of vengeance who wants to lure Batman over to her side of the street. My second is.... nah. King is playing with us like a cat with a mouse; he's an old fanboy and I can't see him twisting a beloved character so far from her iconic best, especially when DC Rebirth is all about returning to fan favourite portrayals. He's more likely riffing on Catwoman's history of amnesia and rewritten personalities. But the sooner the truth comes out, the better.

The narration itself is typically elegant, King knows how to produce pleasing prose. And the Batman sequence is a big, daft dogfight, followed by our hero's battle with Bane and imprisonment in his stronghold. Two interesting strands, but they don't knot together to make a satisfying comic; it's not that's I can't multi-task in my reading, but when a writer does this - my unreliable memory is screaming 'Alan Moore' - I'm thrown out of the immediate experience. My brain is too busy looking for thematic or other connections between the narratives, and wondering if one is more important than the other, to be enveloped by the story and art.

And what art - Mikel Janín's illustrations, with sunshine colours by June Chung, are eye-poppingly attractive, and they tell the Batman part of the story well. A page in which Batman is overwhelmed by sheer force of numbers, for example, is superbly done. 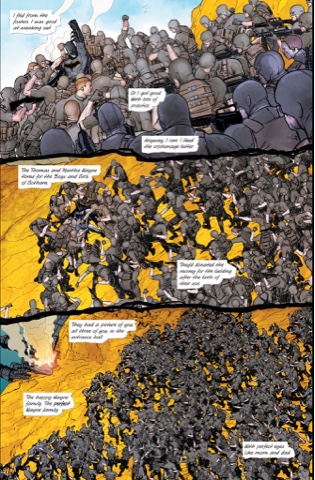 There is a big moment I simply can't visually parse, though:

Has Batman had a gate dropped on his head? Did he sit on a rat? Answers on a postcard. Oh, and Batman without trunks just looks creepy. And not in a way that would scare criminals.

Janín's cover, featuring Batman backed up by Catwoman, the Ventriloquist, Bronze Tiger and Punch & Jewlee, is a winner, it's a shame we didn't get lots of interaction among Batman pseudo-Suicide Squad this time. 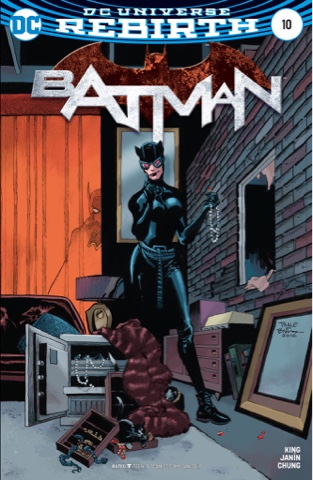 And Tim Sale and Brennan Wagner's variant is a pleasant portrait of Selina carrying out the kind of crime she's meant to commit, with spooky Batman adding extra interest.

Maybe I was predisposed to dislike this issue as I'm no Bane fan - he's just the boring old KGBeast with fewer language skills. But I gave it a chance and it doesn't work for me. Still, I'm a big King fan, so I'll stick around to see what's really up with Catwoman.