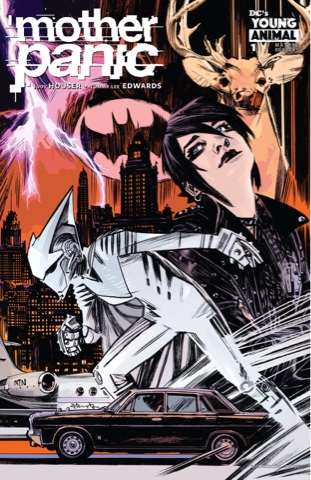 The latest from DC's Young Animal imprint, Mother Panic, centres on Violet Paige, Gotham celebrity and vigilante. She moves in the same circles as Bruce Wayne but isn't a member of the Batman Family - her mission is her own.

What that is, exactly, we don't learn in this first issue from writer Jody Houser and artist Tommy Lee Edwards. We see her return to Gotham as Violet after some time away and abuse the press who show up to meet her. We see her as Mother Panic rescue a criminal bodyguard from mobsters working for a guy who buys from an artist who likes to torture people. We see her in flashback on a hunting trip with her father. And we see her being gentle with her mother, who lives with Alzheimer's. 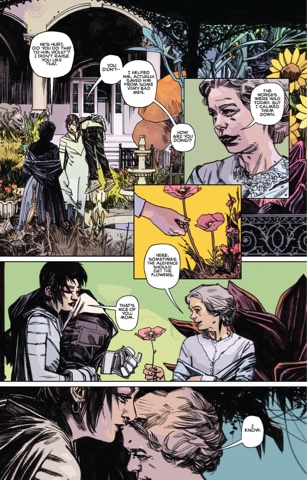 What I don't see is any real reason to come back for the second issue. Edwards' full-colour art is scratchily gorgeous but Houser's script, with its effing and blinding, angry lead and refusal to tell us anything about the Mother Panic persona, or what Violet wants, isn't for me. She's likely meant to be a complex character, a 'difficult' person we might find engaging, even compelling, as we come to understand her, but frankly, Donald Trump, has just become President Elect and I can't be bothered with arses. 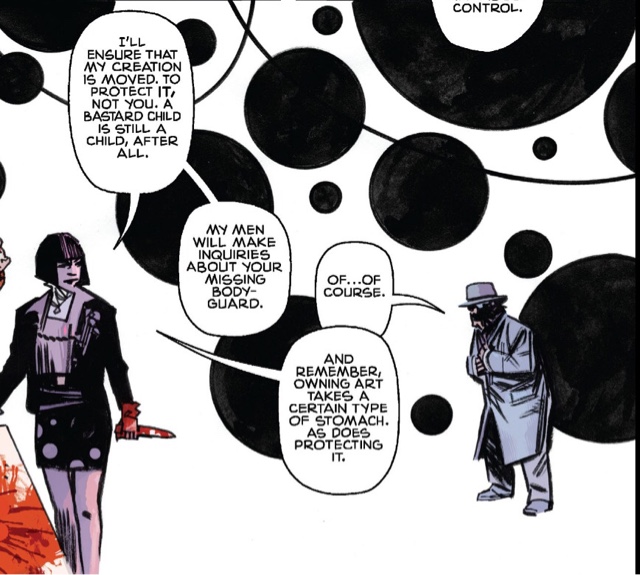 The artist, Gala's, commentary on art may be a meta-moment, trying to say something about the comics form, or it may simply be showing us that here we have a pretentious twonk. I don't know. I was annoyed on page one by Violet's opening narration, and the deliberately messy word balloons letterer John Workman is saddled with, and things never really pick up. I like the vignette with Violet and her mother, and am intrigued by the inset images around the big fight scene, but they're not enough.

I'm not saying this is a bad comic - it's creators may be succeeding in everything they've set out to do - but it's certainly not a good comic for me.