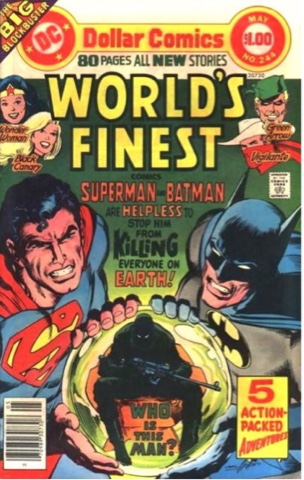 There are some comics I've always wanted, and assumed I'd never get. World's Finest Comics #244 for example. This was the first issue in the Dollar Comics format, which saw the story page count increase fourfold, allowing mainstays Superman and Batman to be joined by Black Canary, Green Arrow, the Vigilante and Wonder Woman. The format change meant it never made it to my area of the UK with the regular-sized comics, so for years it remained a teasing house ad Holy Grail. Now I realise we've had eBay and specialist dealers for years, but I haven't sought out this issue because of its status, in my head, as a never-to-be-owned item.

But there I was at the Thought Bubble Comic Convention in Leeds this weekend, and there it was, and for a very good price. So how was it?

The first strip behind the Neal Adams cover - which is glorious, despite his habit of making Superman and Batman look more sinister than the villains - is Superman and Batman in Three Billion Targets. It's a cracking tale by Bob Haney, as bonkers as anyone familiar with his work would expect - but it's not slapdash, Haney's plot is nicely wrought, taking us from the mysterious murder of mobsters to a cosmic conspiracy from the future. Along the way we have Bruce Wayne with an eye to making quick cash, Superman in the frame for the killings, an amusingly quick-to-judge Commissioner Gordon... 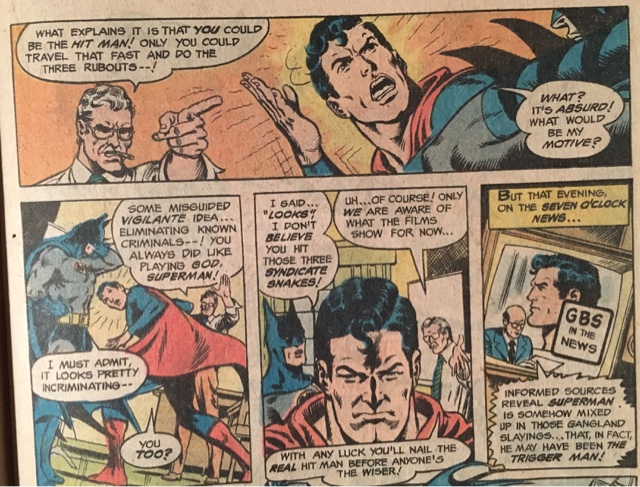 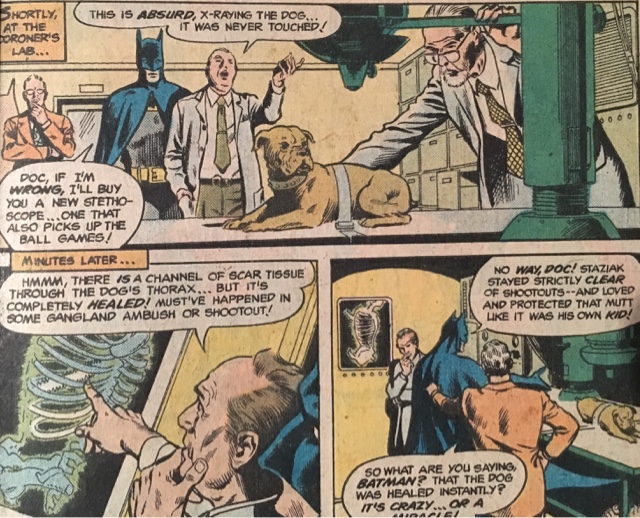 There's typically fun Bronze Age dialogue, such as 'Batman asked me in as special medical consultant'; 'Now hear this, gorillas!' and this sheepish exchange: 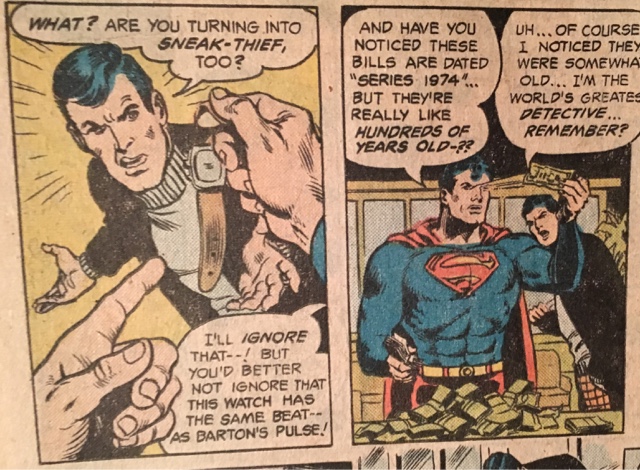 Haney also seems rather prescient in his interest in solar panels, assumption that money will disappear by the 23rd century and concept of a planet-wide mercy killing.

Partnering Haney is penciller José Luis García-López and inker Murphy Anderson. I'm a fan of both gentlemen, but I don't think they gel brilliantly, with Anderson's old school illustrative style somewhat deadening his partner's natural dynamism. Which isn't to say there aren't engaging moments, such as this inter-dimensional crossing. 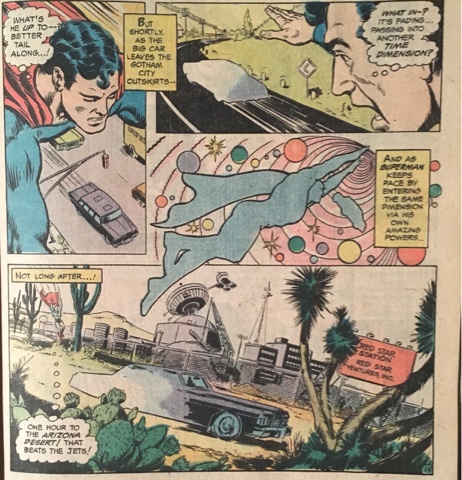 All in all this is a madly entertaining mystery with solid art, a good way to kick off a bold new era.

And Black Canary's sporty tale is a good way to continue things. Dinah is out to prevent pole vaulter George Taylor III - yes old-timers, that's the grandson of Clark Kent's first comics boss - being murdered by the fearsome Rainbow Archer. 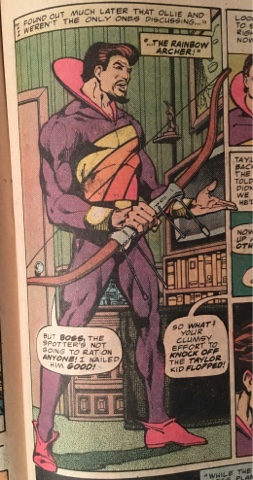 OK. He doesn't look especially terrifying but he shoots a mean arrow. Jack C Harris writes a superb Dinah, confident, clever and a superbly capable combatant... even when the joys of going undercover as an athlete - the fishnets stay, obviously - prove hair raising. 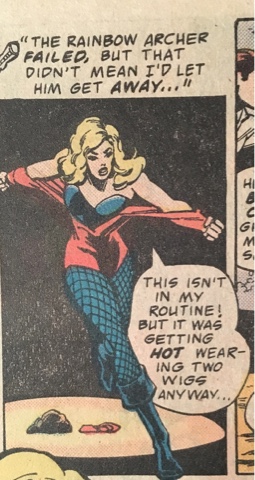 The credits say 'as told to...' because Harris has Dinah narrate the story - it's funny to think this device, so common today, was then worthy of special mention. Drawing the short is Mike Nasser, and while he wears his Neal Adams influence on his sleeve, his own style does show through, mainly in his eye-popping page compositions. Here's one with particular impact. 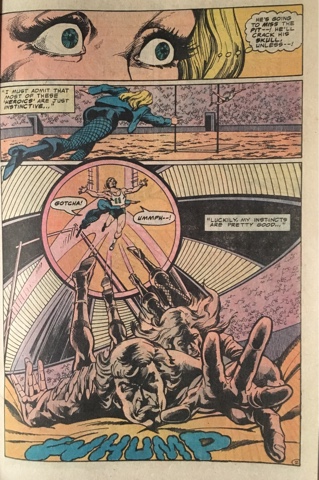 The story ends with Dinah down, but luckily, ready to take up the slack is our own colourful bowslinger, Green Arrow, in his very own story. Surprisingly, Harris passes the writing baton to Tony Isabella, who chooses not to give us a complementary Ollie narration. He does, though, provide a fun caper as the mastermind behind George III's trouble is revealed - Slingshot. And doesn't he have the kinkiest costume this side of Grimbor the Chainsman? 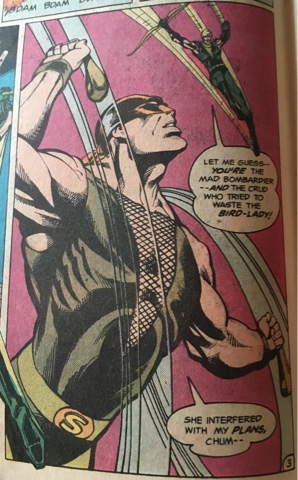 Cosplay, anyone? The look is courtesy of Nasser and Austin, who stick around for this hi-octane short, whose highlight is a fight scene in a speeding convertible. And look at the fun Nasser has with sound effects. The story continues in to #245 which I somehow did manage to buy all this decades ago - I must dig it out.

The Vigilante story is a one and done and it's not at all bad. The Country & Western singing, bad-guy catching cowboy takes on shady developers to help out a Sixties radical turned sheriff. There's Douglas Fairbanks Jr-style derring do but where this story by Bill Kunkel really scores is with its nicely sketched characterisation of Sheriff Tom Blaine and Vig's cute cowpoke dialogue - he even thinks in dialect and slang. 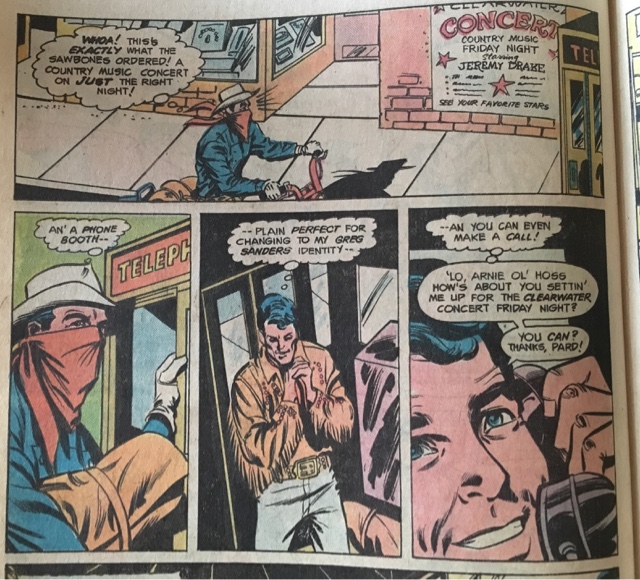 And of course, we get a song! 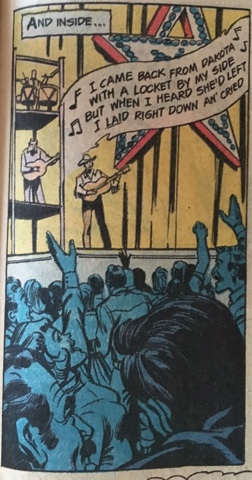 John Calnan was a regular Batman artist whose clean, strong, straightforward style I like a lot. He's paired with inker Bob Smith and the result is pleasantly reminiscent of Dick Dillon and Frank McLaughlin.

Wonder Woman closes the issue with a World War Two-set tale that's not bad in terms of plotting and characterisation but it lacks a colourful villain - Denny O'Neil seems to be sticking to the TV show tone. What it does have, though, is a cracking conclusion and the Best Sound Effect Ever. 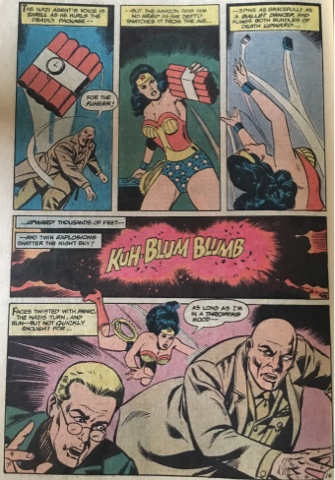 And big points for having José Delbo and Vince Collette on art - OK, it's not the most  exciting work but they were such Seventies stalwarts of Diana that seeing their pages takes me immediately back to the period.

So that's World's Finest Comics #244, a nice collection of stories by talented creators, with the highlights being Bob Haney's slightly less zany than usual tale, and the art of Mike Vosburg and Terry Austin. Is it too late to subscribe?