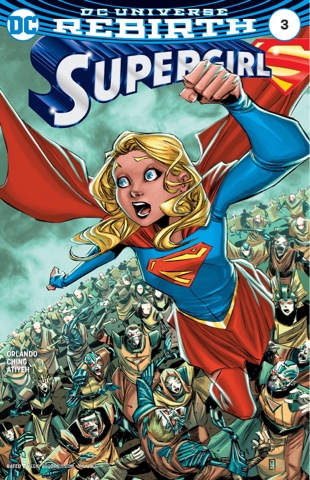 The Cyborg-Superman claims he's revived Argo City, far out in space. Supergirl knows he's a killer robot, but also that he commands amazing technology. And he's convinced her that he's a transformed version of her father, Zor-El. She has to check his story out. But rather than fly off half cocked, she talks to her new parents, Department of Extra-Normal Operations agents Eliza and Jeremiah Danvers. 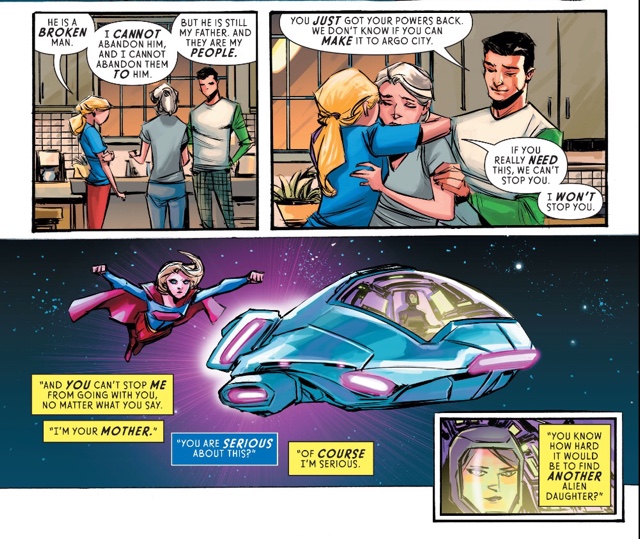 So Eliza accompanies Kara on her journey and they find Argo, no longer a floating community, instead a city flying through space via giant engines. And once they see it... Kara flies off half cocked. She finds Cyborg Superman, and someone else. 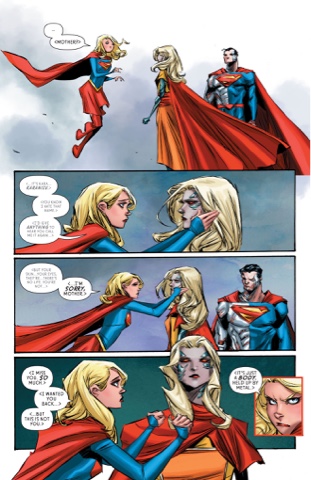 Will Kara accept this robotic Alura as her mother, whom she was just thinking about on the flight from Earth? And will Eliza be safe on Argo City without her super foster daughter at her side? The answers, and a rather big cliffhanger, lie in the second half of the book, which is the first issue of the DC Rebirth relaunch I've wholeheartedly enjoyed. Heck, I even find the sincerity of the crazy Cyborg Superman almost endearing. Supergirl's improving relationship with the Danvers is very good to see - the stroppy teen of the first two issues has gone, as Kara acknowledges they're more to her than just government handlers.

While Eliza is adventuring with Kara, Jeremiah is taking the heat for them on Earth, in a terrific page that shows the craziness of their lives. 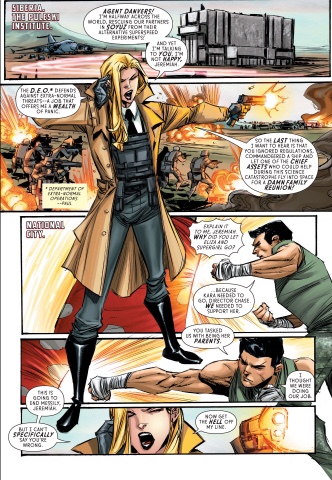 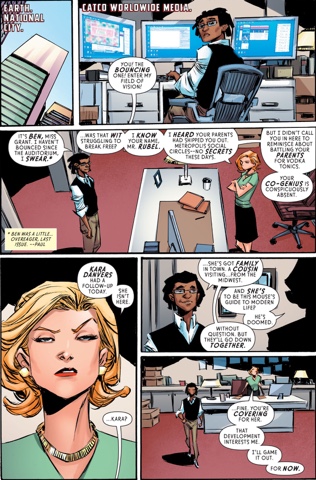 Steve Orlando writes a superb Cat Grant, and it's good to see Kara's school rival Ben Rubin in a more positive light. She's once again nicely captured by artist Steve Orlando, whose work, it seems, I'm finally getting used to - we still get the odd blank-faced Kara this issue, but it bothers me less than previously. There's some appealing figurework, convincing floating figures and Ching's Argo techno-zombies, dead-eyed simulacrums, are horrifying. 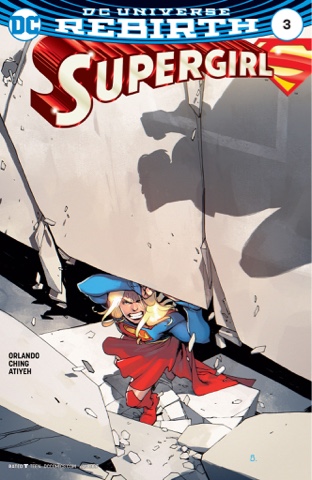 Ching and Atiyeh's cover is a well-executed grabber, while Bengal's variant is a cute alternative. I wish, though, the Superman: The Movie logo treatment would disappear, it's dated whereas the regular version is timeless.

After three issues of one storyline I'm usually itching to move on, but Orlando's knack for pacing as he develops his characters and stories, and the growing appeal of Ching's art, mean I'm happy to enjoy the ride.