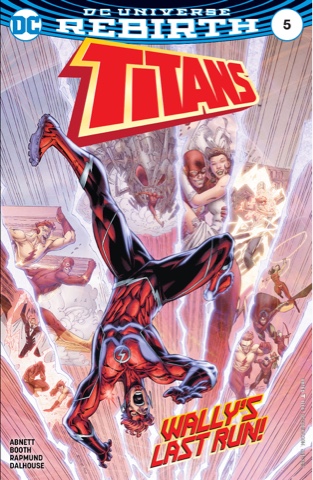 It's Wally West to the rescue as the magical mannequins of Abra Kadabra aim to kill his Titans friend and once (and future?) wife Linda Park. Lilith, Aqualad, Donna Troy, Arsenal and Nightwing are all seconds away from death, and scattered around the US. Is even the Fastest Man Alive quick enough to save them?
Wally doesn't know, but he's damn well going to try, even at the risk of becoming once again lost in the Speed Force.
And that's it for the story this issue, but there's a lot of meat on those bones courtesy of writer Dan Abnett and penciller Brett Booth. Wally's race to save his best friends results in one of the best insights into what it means to be not just a speedster, but this speedster, since Bill Loebs' classic Flash #54. 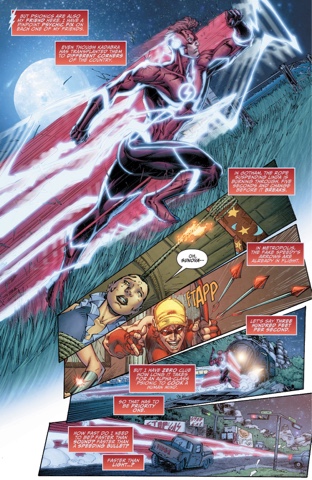 Along the way we have more from clap-happy technomage Kadabra on how he removed Wally from the DC Universe, hope for those of us dying to see Linda and Wally back together, and we get one step closer to the return of my favourite superhero team.

Abnett's script is as sharp as anything he's ever written, but it's penciller Booth, inker Norm Rapmund and colourist Andrew Dalhouse who steal the show. Abnett's script invites them to go full-on with the super-speed pyrotechnics and they rise to the challenge. Booth's compositions are his tightest yet, Rapmund adds extra definition and depth, while Dalhouse provides the light show. It's three talented creators showing us what synergy means. This page, with panels combining to give us a Flash lightning bolt, is especially effective. 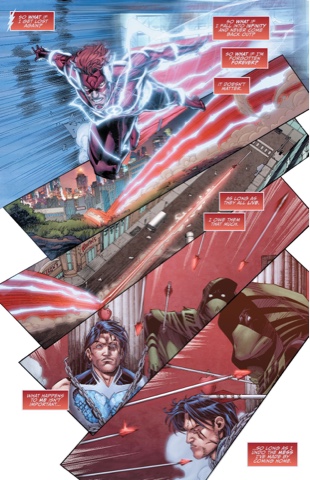 The artists also do a fine job with the cover, I like the non-obvious choice of an upside-down Wally. And Mike Choi's variant is just delightful. 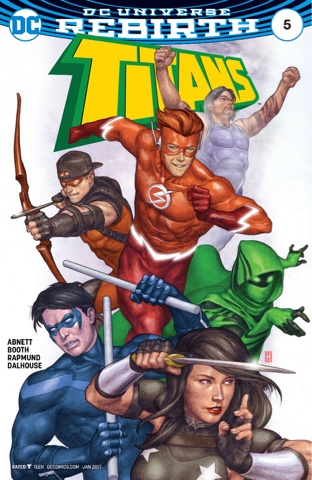 I realise Wally's return to the DCU is powering this first arc, but I hope Abnett and Booth are planning similar showcases for the other Titans. This series started with a bang and I suspect it's only going to get better.
Andrew Dalhouse Brett Booth Dan Abnett DC Rebirth Norm Rapmund Teen Titans #5 review