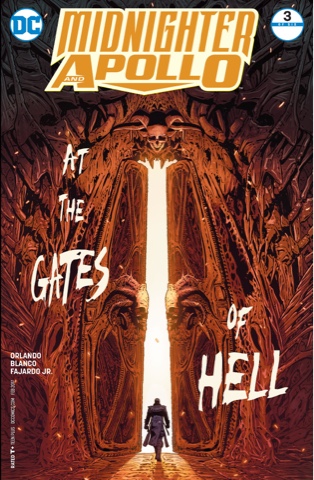 Apollo is trapped in Hell but Midnighter plans to bring him back. He hasn't got a handbasket but he does have a candle empowered by Lord of Lies Neron, which can take him there.

Speaking of whom, Neron is playing a game with Apollo, determined to convince him that while he presents himself as a hero, he belongs in the Underworld. And on a strict technical level, the case is compelling. 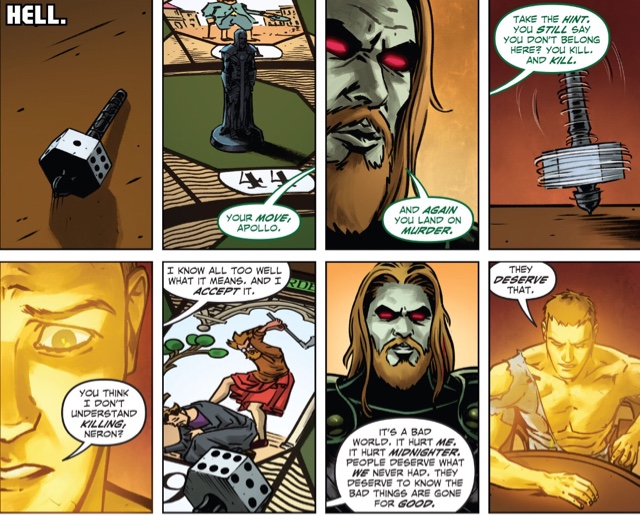 Midnighter, meanwhile, is looking for something that will give him the power he needs to mount a successful mission - the Ace of Winchesters, a legendary gun that can kill demons.

Steve Orlando is having huge fun with this mini-series, showcasing the partners' personalities by separating them. Readers of Orlando's recently ended, massively entertaining, Midnighter series will recognise the driven, likeable anti-hero, but Apollo's not had a showcase in a while and it's good to see his point of view. The issue jumps back and forth between the two, Midnighter's action scenes contrasting with Apollo's quieter drama. There's also room for a tender wee scene between Midnighter and his barman friend Tony. 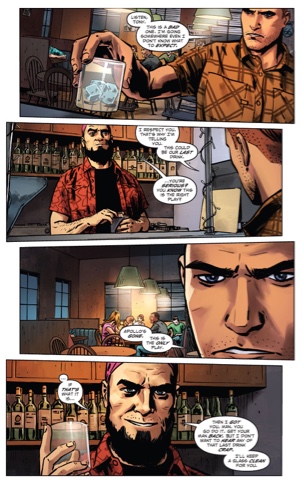 And it's great to see how Orlando peppers the story with characters, props and places from DC history, from The Ace of Winchesters (Hellblazer and Hitman) to no-longer-rubbish magician Extrano (New Guardians) to Leesburg (Peter David's Supergirl). And they all make sense: the Ace is exactly the weapon needed, Extrano the magician most likely to know Midnighter and Leesburg did tend to attract suburban demons.
Fernando Blanco's storytelling is terrific, the events clear, the images gorgeous - well, apart from a demon opening up to Midnighter, and that's differently impressive. I like the big, daft action moments, but equally good are the more sedate compositions, with grids used to great effect. And the hellfolk he conjures up with colourist Romulo Fajardo Jr are delightful. 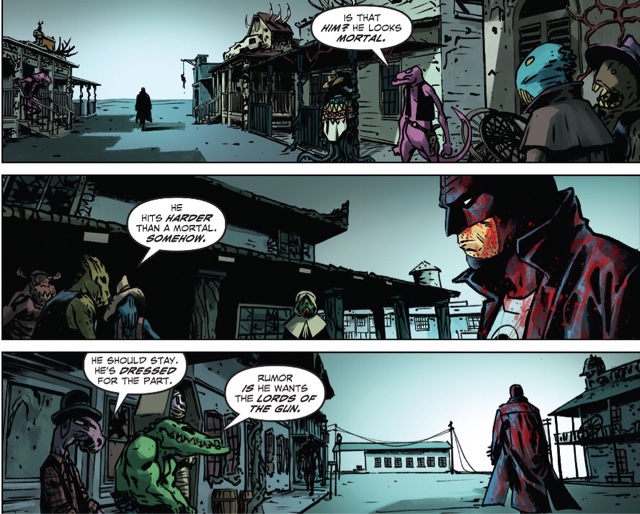 Aco, who worked with Orlando on the Midnighter series, teams with Fajardo to give us a cover idea we've seen many times, but one beautifully executed.

Midnighter and Apollo occupies a special place in the line of DC superstars, somewhere between the dark superheroics of Batman and the broad silliness of Sixpack and Dogwelder. I'm keen to have it continue and see Apollo and Midnighter reunited for different kinds of adventures, a kind of World's Gayest.
Aco Fernando Blanco Midnighter and Apollo #3 review Romulo Fajardo Jr Steve Orlando