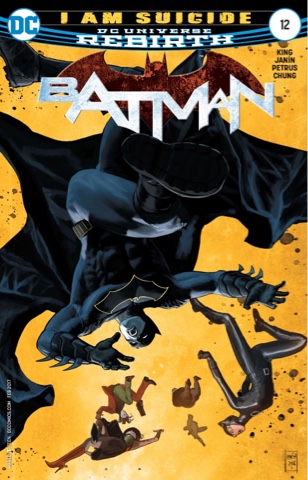 Batman is fighting his way across Bane's Santa Prisca stronghold. Dozens of thugs stand in his way but he's determined to snatch Psycho Pirate from him and take him back to the US. He wants the mind-mangling villain to restore the sanity he stole from troubled young heroine Gotham Girl.
That's what's happening in the pictures. Tom King's words, though, tell a second story. A story of the Batman and how he came to be. A story framed in a letter to Catwoman who, while apparently a defector to Bane's cause, he sees as his soulmate. A fellow traveller in pain. 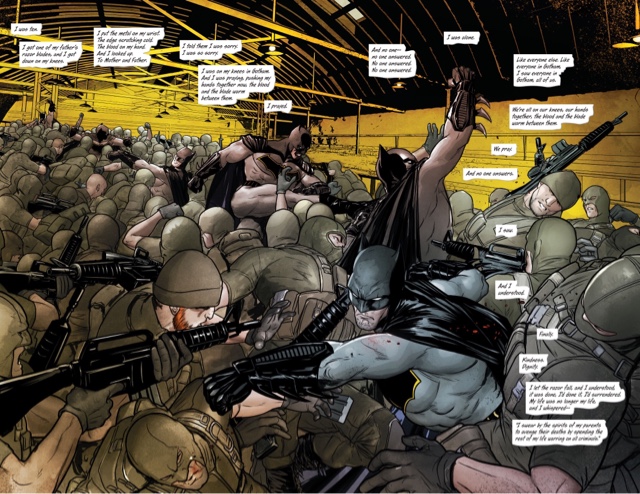 When Scott Snyder was writing Batman he provided an origin tweak involving a hologram projector. Much as I enjoyed that run overall, I'm ignoring that sequence - it needlessly complicates the bat coming through the window moment.
Well, King's changes are bigger, making literal the title of the current storyline, I Am Suicide...
It's elegantly written but adds far too much despair to Bruce's journey. The boy was going to slash his wrists but chose not to die when no deity answered his cries to Heaven? Hanging onto his pain, he eventually resolved to dress as a bat and fight crime? I'm not buying that Bruce was quite so broken at age ten; it makes the legend unbearably morbid, discounting Alfred Pennyworth and Leslie Thomkins' efforts to give the boy some comfort.
The artwork guarantees this issue will be staying in my collection, but it's not getting anywhere near my head canon. 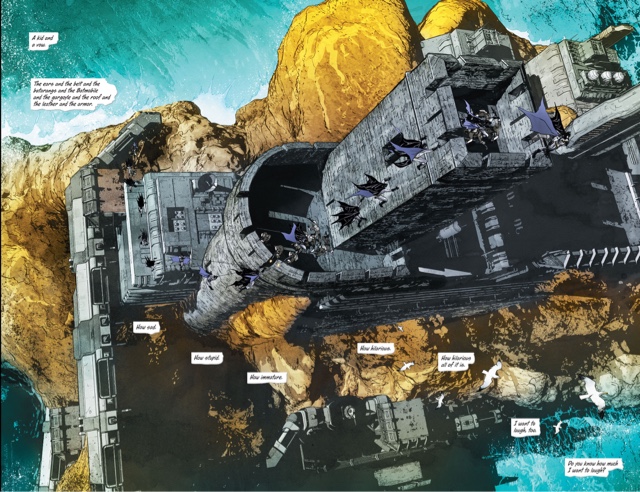 Mikel Janín shows us Batman proceeding towards Bane's throne room; running, leaping, tumbling, swimming across nine stunning double page spreads. I'd love to see how King described the scenes in his scripts - did he detail every last brick in the wall, a la Alan Moore, or simply describe the basic scenario and suggest Janín go wild? The carefully composed shots, each one a mini-movie, are nigh-breathtaking, freeing King to give us his take on Batman's beginnings. King and Janín really are a great team, the definition of synergy. Bookending the spreads are a pair of splash pages, with the final page being especially impressive, evoking hell in the way the figures are posed and lit.
Credit must also go to Hugo Petrus, who inks alongside Janín and keeps things looking sharp, while colourist June Chung proves a mistress of atmospherics and texture. And Clayton Cowles' sensitive lettering choices complement the script.
I don't like the big takeout of this issue but this is comics, it's not necessarily going to stick - heck, Batman's in the vicinity of Psycho Pirate, who could be royally messing with his head. And King does put another spin on the abominable 'Catwoman killed 237 people' business from earlier in this arc, which is something...
...yeah, why worry?
Anyone worried?
Bane Batman #12 review Catwoman Clayton Cowles Hugo Petrus June Chung Mikel Janín Pyscho Pirate Tom King