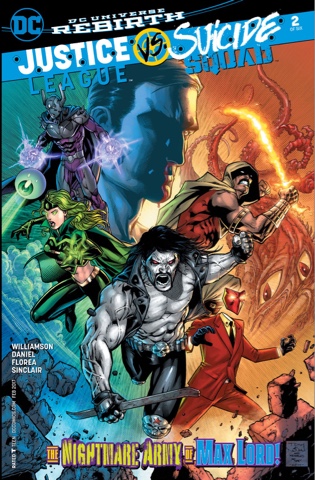 Here's a comic that does what it says on the tin as the Justice League and Suicide Squad face off in fine style. Task Force X are on the island of Badhnisia to stop a doomsday cult using a STAR Labs 'quake pulsar' to destroy the place. Having just learned of the Squad's existence, the League aim to shut it down - but if the heroes capture the villains, the latter's handler, Amanda Waller, will detonate the bombs implanted in their heads. That's incentive enough for new conscript Killer Frost to throw herself into the fight alongside Killer Croc, Deadshot, Captain Boomerang, Enchantress, Harley Quinn and El Diablo.
They're not confident they can beat a team as powerful and experienced as the League, the odds need to be evened. 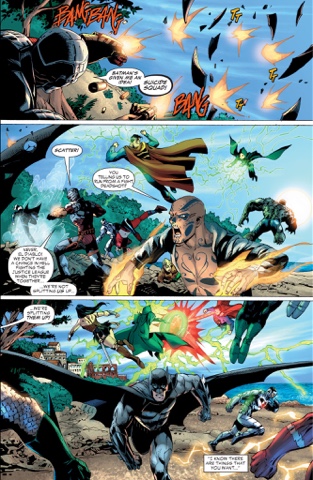 It's a good move, allowing the melee to be succeeded by vignettes that show off the skills and personalities of the participants. Odd moments are particularly intiguing. 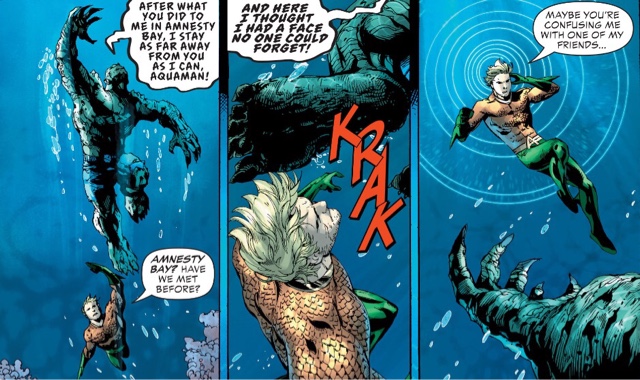 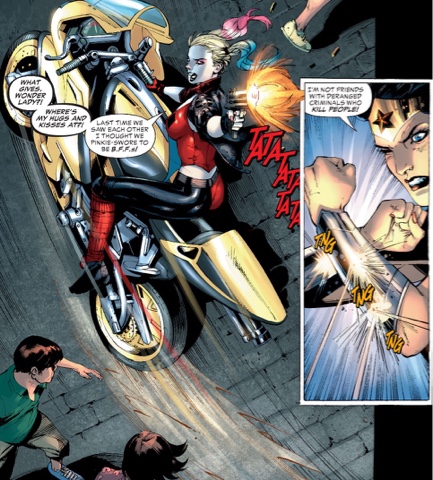 An encounter with Killer Croc isn't something you'd forget, so one of them has mangled memories. Ditto as regards Harley and Wonder Woman's Little Black Book meeting.
Someone who might be able to shed light is Maxwell Lord, who last issue bust several extremely powerful villains from an isolated facility. Lobo, Emerald Empress, Johnny Sorrow, Dr Polaris and Rustam seem to come from the pre-Flashpoint DC Universe, the one from which Superman and the Wally West Flash hail. Max wants them to work with him and while he has a telepathic 'push power' it's never been strong enough to control strong-willed types who know what he can do... 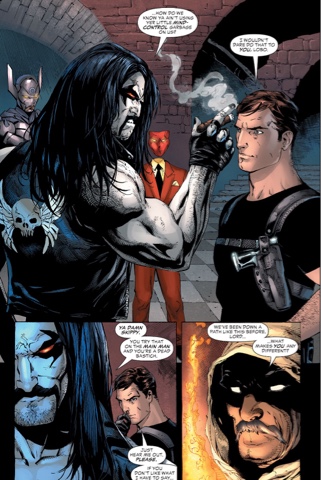 ...maybe things have changed - or perhaps Max just has an itchy nose in that second panel.
As the first big event of the DC Rebirth era - apparently the recent Batman Family vs the Monster Men doesn't count - this book has to matter. And what matters more to longtime comic fans than continuity mysteries? I'm certainly lapping up the riddle of what Max wants, why these villains, what's up with Emerald Empress leaving the 31st century to track down a Legionnaire (presumably Saturn Girl, currently allowing herself to be detained in Arkham Asylum)?
Continuity porn apart (and Badhnisia, of course, is connected to the JSA's Johnny Thunder) the fight scenes are huge fun, with writer Joshua Williamson capturing the characters and making good use of powers. The Flash/Boomerang scene is especially good, but then Williamson has been writing Barry Allen awhile now. An encounter between Superman and Enchantress is also a highlight, while his meeting with Killer Frost gave me a nostalgic glow, recalling a very early Firestorm story. And Victor Stone shines like a Cyborg should - though with his compassion, rather than his strength.
I just wish DC hadn't let on that two characters in this book are joining Steve Orlando's new Justice League of America - I rather like surprises - but that's marketing for you. 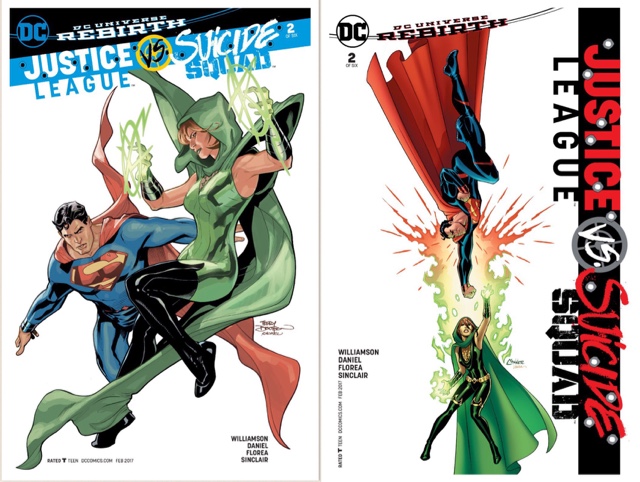 Tony S Daniels pencils, Sandu Floreu inks, Alex Sinclair colours and I sit back and enjoy the smooth storytelling and moody, eye-catching tones. The poses are dynamic, the emotions convincing, the big moments suitably big - it's a fine showing from all concerned. Daniel and Sinclair team wth inker Mark Morales for an attractive poster cover featuring Max's mates, while the two variants - by Amanda Conner & Laura Martin, and Terry & Rachel Dodson - surprisingly use a single idea, Superman vs Enchantress. Thinking on, last issue gave us two versions of Batman vs Deadshot. I guess it's a thing.
I'd somehow missed that this is a weekly series so was surprised to see this drop today - and after reading this issue, I'm delighted. This is proper big, daft superhero entertainment with a side order of smarts, perfect for a dark winter's evening.
Alex Sinclair Amanda Conner Joshua Williamson Justice League Vs Suicide Squad #2 review Laura Martin Mark Morales Rachel Dodson Sandu Floreu Terry Dodson Tony S Daniel