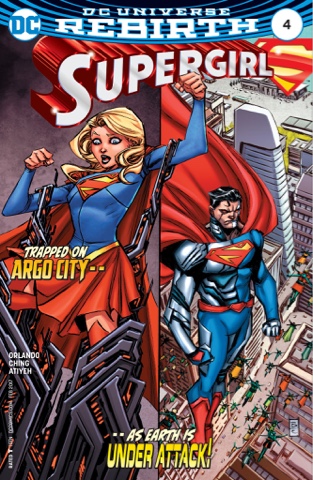 The citizens of Argo City are invading Earth and National City is the beachhead. Supergirl isn't there to defend, she's on the reborn Argo City created by her father, Zor-El, the Cyborg Superman. Kara has been caged while her birth mother Alura - or rather, a robo-zombie corpse with a twisted version of her personality - steals the life force of her foster mother, Eliza.
DEO Agents Chase and Danvers - Kara's foster father, Jeremiah - lead the defence forces but it's tough going. 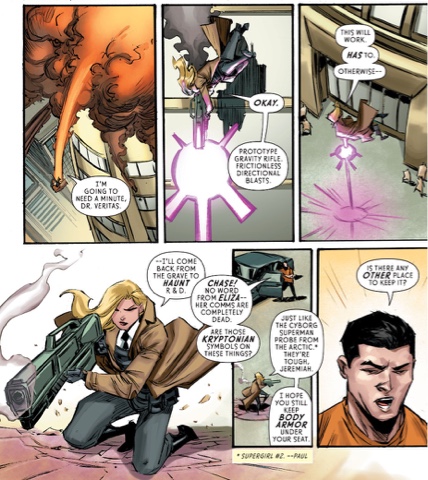 Kara must convince Alura that Earth is worth saving but can her words get through to the robotic zealot? 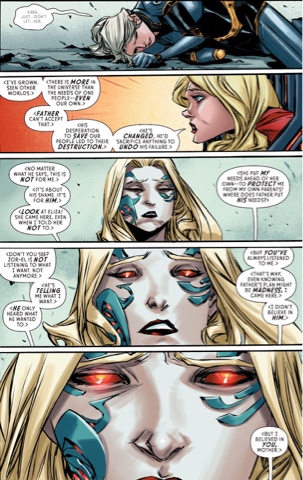 Well, they are pretty great words. Steve Orlando's Kara is passionate, eloquent and very, very smart, here managing to escape her tight cell with... super-hearing. The script throughout is rewarding, full of nice personality moments among the action. Cyborg Superman takes a backseat this time, which is fine by me - even with Orlando's more sympathetic take, I hate the character now he's Zor-El rather than Hank Henshaw. 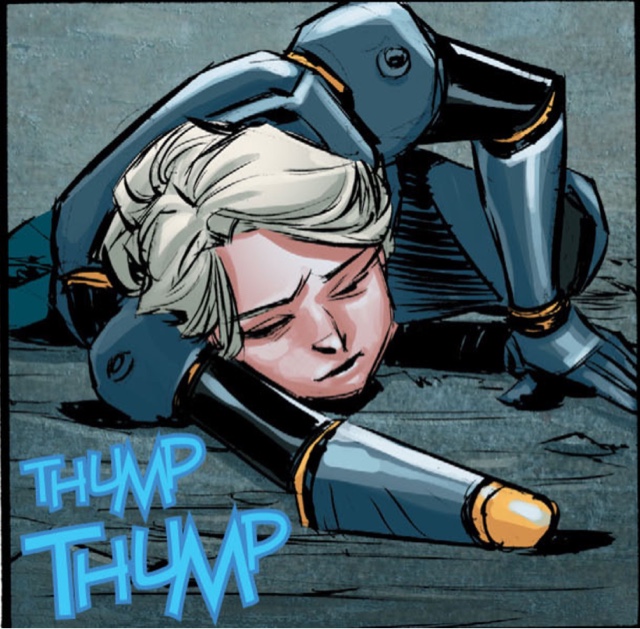 The most interesting thing for me this time was Eliza's missing hand... on noticing it I assumed it was a side-effect of Alura sucking up her 'Odic force' but no, she's been drawn with a stump since the first issue. It says something about the thinness of artist Brian Ching's figures, and the occasional lack of finish - I've mentioned the missing facial features previously - that it hadn't registered. Overall, Ching turns in another good job here but again, I wish he'd take digital reading into consideration and remember that Guided View goes in close... heck, some of the Earth folk look as weird as Argo's cybernetic citizens. Cameron Chase, for instance, looks like she's cosplaying The Question.

When Ching does choose to draw a clear close-up, the results are great, he has a gift for nailing the emotion; I'm not asking for every image to be a fine portrait, just for such pesky things as noses and mouths.

Orlando brings back a supporting character not seen for ages in Dr Shay Veritas, super-scientist friend of Superman. A creation of Scott Lobdell, she has an interesting look and gimmick in that she can't leave her very Easter eggy Bunker 252 five miles under the Earth. I wonder what Orlando's plans for her are.
And it goes without saying that I want to know whether Eliza just happens to have been born with a hand missing, or, more likely, lost it in her super-spy work... in which case, wot, no cyborg hand? Surely Veritas has an app for that. Maybe by the end of the story it'll have regenerated via an Argo City nanobot, a gift Trojan Horse that'll eventually see Eliza become Cyborg Supermom. And a la The Quiz from Grant Morrison's Doom Patrol, in putting that idea out there I've stopped it from happening, yay me! 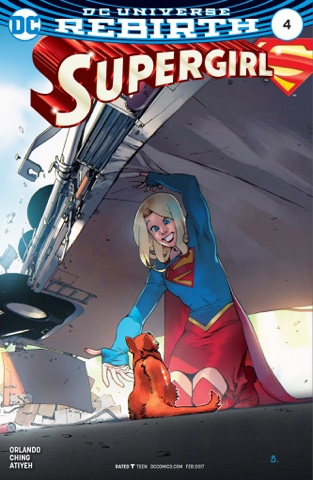 I like the idea of Ching's cover, it's very Bronze Age, but he and colourist Michael Atiyeh don't give us enough contrast in composition and tone to stop the two sides blending in. The variant cover by Bengal, with Kara and Streaky the Super Cat, is pure comics joy.
The Cyborg Superman story has a couple of issues to go but if it continues to be engaging, I'm good with that. Easily fixable art quibbles aside, Supergirl is one of my favourite DC Rebirth books.
Bengal Brian Ching Cyborg Superman Mike Atiyeh Steve Orlando Supergirl #4 review