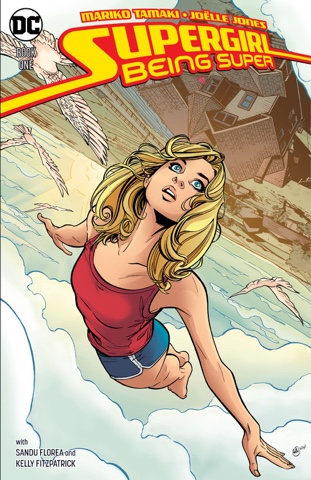 Kara is almost sweet sixteen. She goes to high school in Midvale where she has two best friends, Jen, who's an athlete, and Dolly, who isn't. Kara's on the track team with Jen and has a part-time job at an agricultural museum. Her parents are nice ordinary folk and Kara counts her life as 'awesome'. The only thing that troubles her are her dreams. 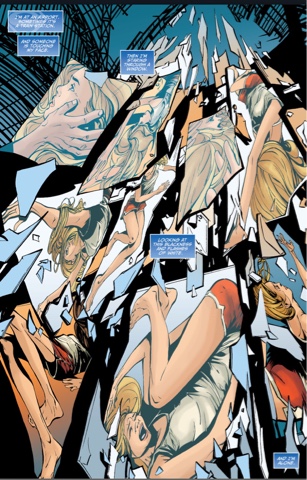 She's lived with her adopted parents for half her life and can't remember anything before they found her. They care for Kara but seem spectacularly uninterested in her origins and gifts, which may be why there's a core of loneliness at her centre. Perhaps Jeremiah and his wife - we don't get her name, but bet on Edna, Sylvia or, most likely, Eliza - don't want to think about the fact Kara isn't their birth child; they've probably fudged her legal status. 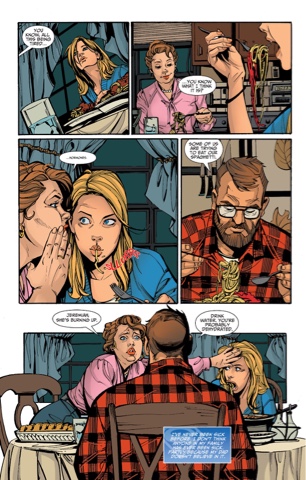 Heck, it's not like anyone knows Kara's actual age - her 'birthday, in a callback to Bronze Age Superman - is her 'Earthday', the day her parents found her. She's a growing young woman with no idea what changes her different physiology will bring. She does learn that there are zits, and then there are zits. Kara's a girl with huge potential, but no firm emotional foundation, a problem made manifest at this issue's climax. 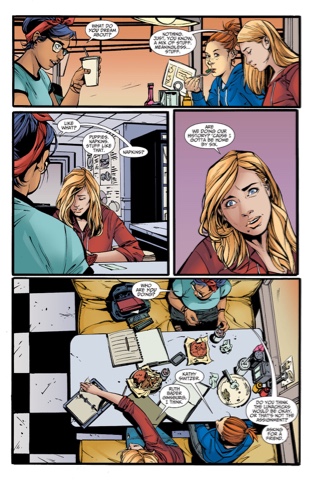 Writer Mariko Tamaki and penciller Joëlle Jones are superb creators. Tamaki'a script has an impressive naturalism, I believe in these characters and their world. The illustrations of Jones, with inks by the talented Sandu Floreu and naturalistic colours by Kelly Fitzpatrick - are a gorgeous slice of Americana: the characters look fabulous, with a terrific variety of believable bodies on display, and the acting is splendid. Jones' body language is superb, complementing Tamaki's script, which is stylishly laid out by letterer Saida Temofonte.
I don't get the publishing schedule. Like the current, excellent Deadman book, this double-sized series is published every two months. Who wants to wait that long for something they're enjoying? Why not halve the comic's size and publish monthly? Or wait until everything's I'm the drawer and put out the giant issues monthly? It's all very strange, and may hurt sales.
I did find this chapter a little slow at times. Writer and artist have 50 pages and they use them to introduce Kara at a very deliberate pace - a shorter page count would encourage speedier storytelling. I'd like to have spent a little less time on Dolly and Jen and more on the uncanny aspects of Kara - what we do get is pretty darn absorbing. And Kara's Supergirl-style track outfit apart, I could have done without all the sports stuff.
But not every comic is aimed at me - Being Supergirl is a Young Adult take on Kara's beginnings and will almost certainly be a splendid collection when the four issues are collected. The teenagers at whom this is aimed will likely lap up the high school atmosphere (Tamaki gets lots of credit for not including the tired Mean Girls trope). Bits of character work intrigue - why does Jen say dreams are stupid? Why does Jeremiah believe in neither sickness nor birthdays? And surely telling Kara this... 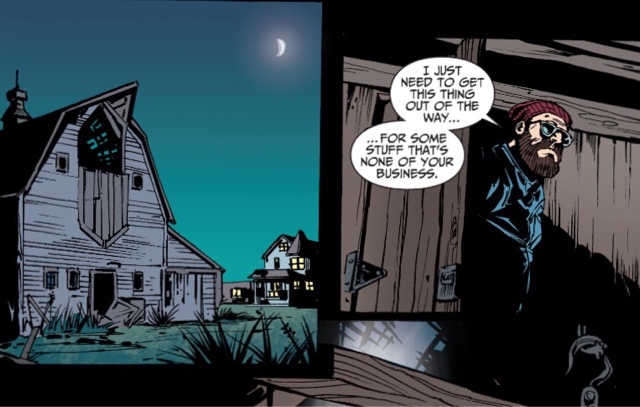 ... is inviting her to go snooping?  What's more, the running business will likely wind up with the revelation that the heart monitors Coach makes her charges wear at all times are actually looking for the Girl Most Likely to Be Kryptonian.
So while I'd like more incident, the quality of this issue means I'll be back. The creators deserve a chance to build their story - a slow burn can result in a gorgeous fire. And besides, I'm a Supergirl lifer - I can't go anywhere until Kara dons a proper costume and goes public. Which will likely be the end of the final issue. Oh well...
Joëlle Jones Kelly Fitzpatrick Mariko Tamaki Saida Temofonte Sandu Floreu Supergirl: Being Super #1 review