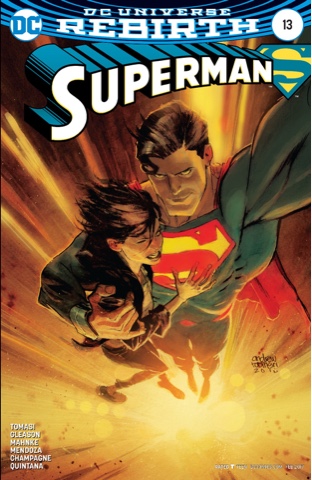 When I was a kid, reading passed-down Silver Age comics, you couldn't get through a Superman Family story without the phrase 'How ironic (choke)' turning up at the end. Editor Mort Weisinger was obsessed with unexpected turnabouts - Lois Lane would marry a gorgeous alien who turned out to be allergic to her hairspray and died. Jimmy Olsen would find a hoard of gold only to have it transform him into a leprechaun.
Well, irony makes a comeback just in time for Christmas in this week's Superman, as Frankenstein, Agent of SHADE, continues his guest appearance. Last issue saw Lois's new friend Candice, small town newspaper editor, apparently revealed as an alien hiding on Earth. This week we learn that Candice isn't an extraterrestrial, but she's being impersonated by one, Kroog, a despot responsible for the deaths of untold beings across the galaxy in their quest to retain power. Superman and Lois are shocked!

Oh, pretty much like you, Clark - apart from the war criminal part. And then there's...

Oh, like you Lois, who, even though it's in a good cause, is deceiving the friends of a recently deceased Lois Lane in taking over her life.
No one chokes, but the irony is evident, and it made me chuckle. What also had me smiling is the mirror writers Peter J Tomasi and Patrick Gleason hold up to the real world in Kroog's assertion they've done nothing wrong.

You've likely noticed I'm being woolly with Kroog's pronouns. That's because their gender, if such even applies to a mildly vampiric alien shapeshifter, isn't firmly established: sometimes characters refer to Kroog as 'he', sometimes 'she'. A nice touch.
So, at the beginning of the issue, Superman, Lois and Frankenstein have Kroog captive. The big green man-monster summons a SHADE transport, but another player arrives, out to claim Kroog as her own. 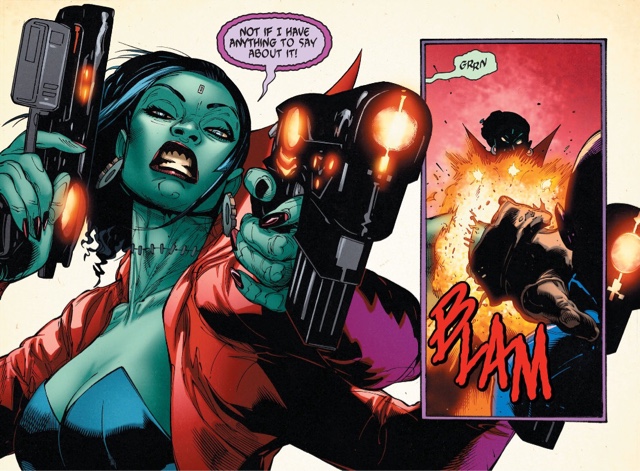 It's The Bride, aka the estranged Mrs Frankenstein, reunited with her husband but not ready to play house. Her actions lead to Kroog escaping in a rather stomach-churning way, meaning the Frankensteins will have to rise above their differences if they're to recapture he/she/it. They bicker, as immortal beings with inflamed passions are wont to do, and while Superman wouldn't ordinarily interfere in a couple working out their differences... 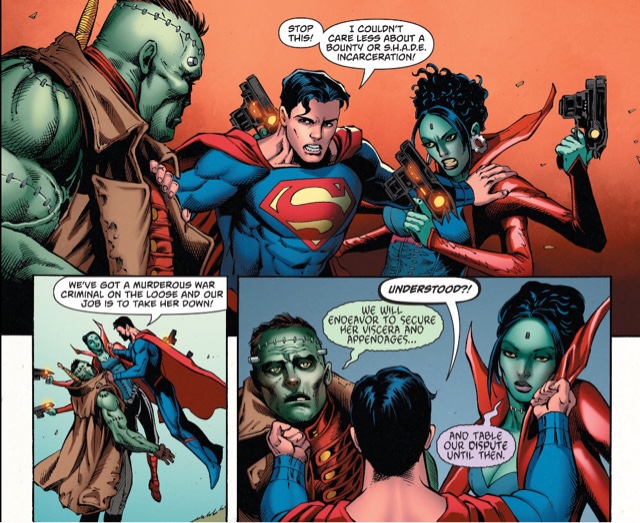 There's no doubting whose comic this is!
Before she takes off to find the real Candice, Lois and the Bride share a touching scene in which the root of the Frankensteins' marital problems is laid bare, and it's a precursor to a powerful moment later on, after the Kroog plot has wrapped.
The most sinister panels of the issue feature Clark and Lois's neighbour, Cobb Branden. 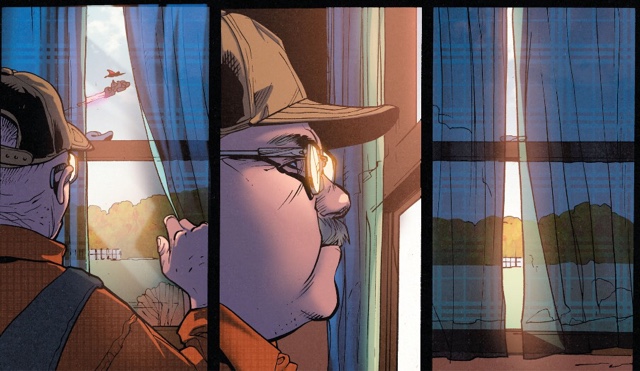 Brrrr. What is he up to? Is he an agent of the mysterious Mr Oz? Or just a neighbour, creepily framed.
The two-part story closes with Lois and Clark sharing a gorgeous moment. The writers don't give us dialogue; it isn't needed - Doug Mahnke's pencils let us know they're thinking of the tragedy of the Frankensteins, and counting their blessings.
Mahnke has been one of my favourite artists for years and I like his work more every time out - he perfected the big, bombastic scenes a long time ago, so it's the ever-better smaller moments I'm noticing. There's an emotional intelligence to Mahnke's linework few artists can match. And with inkers as skilled as Jaime Mendoza, Keith Champagne and Norm Rapmund, we're guaranteed great finishes. I don't know if Kroog will appear again, but I hope so, I like his design, especially the facial marks that remind me of such weird cosmic baddies as Lobo and Mokkari.
Colourist Wil Quintana continues to gives us pages that pop without ever oversaturating the artwork, while letterer Rob Leigh employs a variety of fonts to suit the characters and story beats. 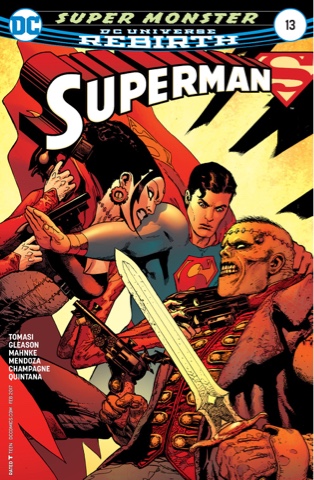 We once again get a regular cover and a variant. I like Mahnke's composition, the red tones applied by Quintana less so. Andrew Robinson's variant is a punchy little number featuring Jon and his Dad - it's impressive work.
Superman #13 is another fast-paced, sharply scripted, great-looking comic book, exactly what I want in a Superman series. And if anyone would like to consider it a backdoor pilot for a new Frankenstein series, count me in.
Andrew Robinson Doug Mahnke Jaime Mendoza Keith Champagne Norm Rapmund Patrick Gleason Peter J Tomasi Rob Leigh Superman #13 review Wil Quintana