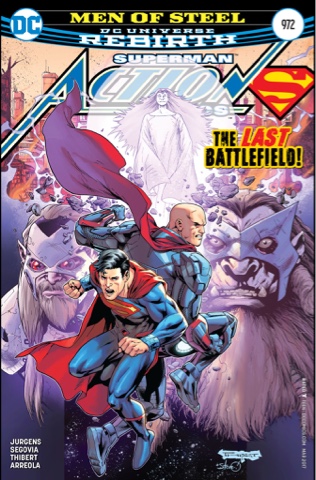 It's Superman and Luthor's last stand, but it's not against one another - they're united against L'Call and Zade. The alien powerhouses want to execute Lex for crimes they believe he'll commit. Superman has crossed light years because he won't condemn a man in the belief millions of lives will be saved - he knows the future isn't fixed, that a person can change.
And he isn't even sure this Lex needs to change. Since arriving on a version on Earth not his own, he's tested his assumption that any Lex is a bad Lex, and found no proof. So he gets the benefit of the doubt. And Superman, trapped under a red sun, is willing to die to defend his point. 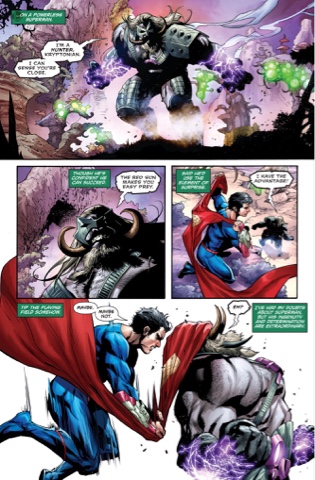 Just as Superman has been giving this Lex a chance, his own actions are wearing down Lex's assumptions about him.
And in the end, it's Superman who stops the fight, not with his fists - well, not entirely - but with reason. By the close of this great-looking, smartly written conclusion to the Men of Steel arc, he and Lex come to an understanding. It's a new dawn.

I'm torn. Lex is my favourite Superman villain and I'm really tired of the good bad guys turning anti-hero, or even good. On the other hand, some of my favourite Lex stories, back in the Silver and Bronze Ages, involved him being forced into the position of hero and eventually trying to be a better man. And he was originally Clark Kent's best friend - would Lex being good be bad?
Besides, it's not like he can't embrace the nasty after his shot at redemption...
This issue also sees the doppelgänger Clark Kent discover that Lois has a young boy hanging around her, one who looks a lot like her... she needs an ingenious explanation if he's not to guess she's Jon's mom.

Good grief. And who knows, he may not be bad, he may just be drawn that way - it's not like writer Dan Jurgens isn't a wily soul. He certainly teases us with a closing splash that's full of foreboding.
Jurgens, Segovia, Patch Zircher and their colleagues have produced a cracking epic spotlighting the Superman/Luthor conflict across time and space. Pull out the Clark subplot and it'd make a fine DC animation adventure. I can't wait to see what comes next.
Inker Art Thibert provides this issue's main cover - I don't recall the last time I saw pencils and inks from him, and I really like this poster-style illustration, which is nicely coloured by Steve Downer. 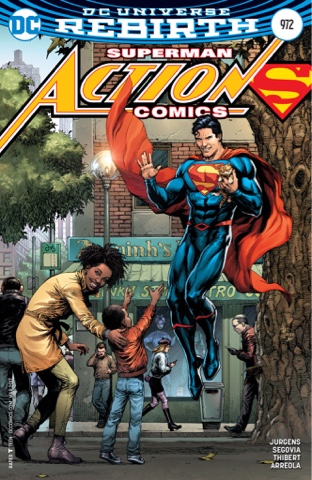 And then there's the variant cover by Gary Frank and colourist Brad Anderson. If DC don't blow this joyful piece up and make it a mural at their Burbank headquarters, they are crazy (and a Josh Middleton DC Rebirth Aquaman cover wouldn't go amiss, either).
New characters with potential, new perspectives on old characters, and of course, plenty of action - Action Comics Weekly may not have caught on way back when, but Action Comics fortnightly? It's win all the way.
Action Comics #972 review Art Thibert Brad Anderson Dan Jurgens DC Rebirth Rob Leigh Stephen Segovia Steve Downer Ulises Arreola