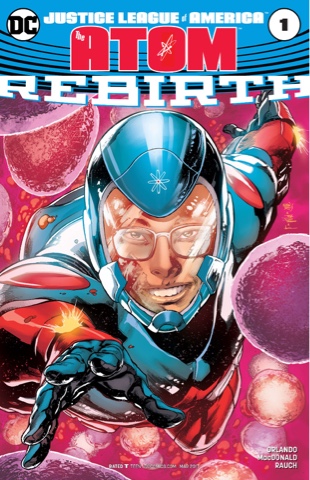 It's Ryan Choi's first day at Ivy Town University. His parents have accompanied him all the way from Hong Kong. They're kinda clingy. 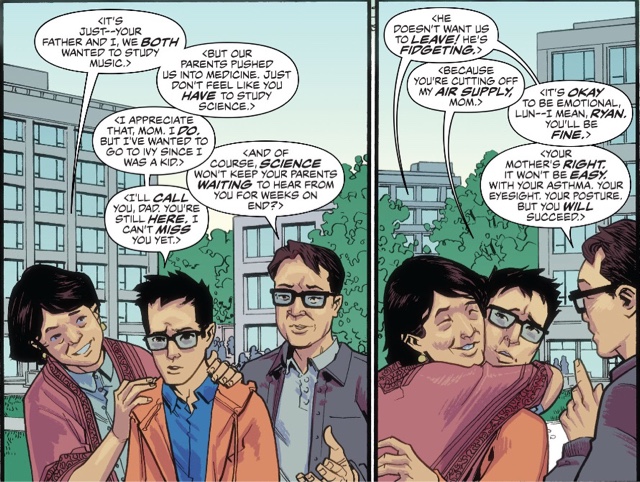 But adorable.
Soon, Ryan's smarts have caught the attention of his idol, physicist Ray Palmer. A year later, Ray calls him to his office to answer a question. 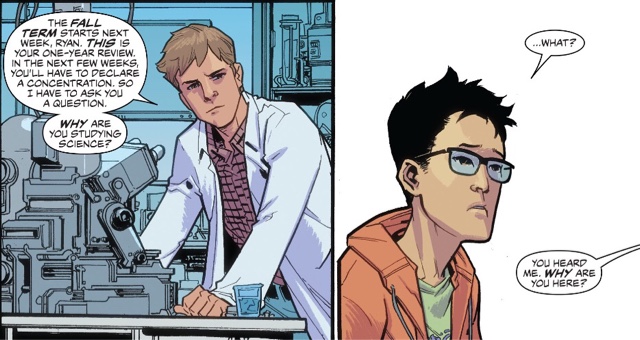 Ryan comes up with the response that satisfies the professor, and he's made an offer
And the next year is spent acting at the Atom's second, monitoring Ray while he's off adventuring at six inches, one inch, microscopic size. But one day, Ray vanishes...
You don't have to be familiar with Ryan's previous continuity adventures as Ray's superheroic heir to guess what happens next. The issue closes with Ryan ready to take up the mantle and find his mentor.
I like this opening chapter a lot, and rather wish it were the lead-in to an ongoing - or would a mini be more appropriate, ho ho? - rather than simply his membership in the upcoming Justice League of America book. I want to see more of his parents... hey, they could move continents. I want to see his solo adventures as the new Atom. I want to see more of his roommate, Adam Cray, who's as allergic to shirts as Ryan is to dust. 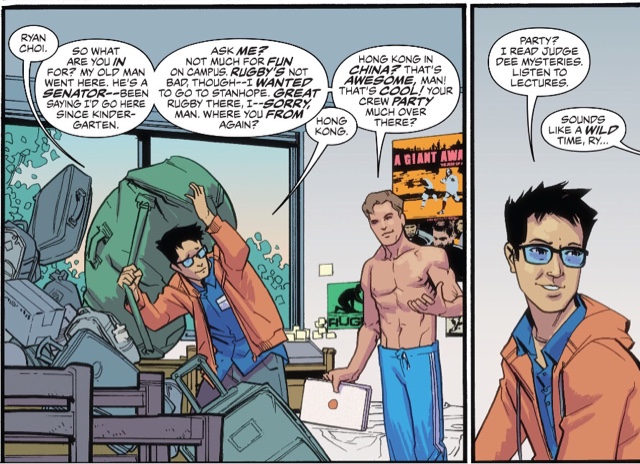 I suppose Ryan's asthma explains the mask he wears as the Atom, if you're going small, dust is going to be a big problem.
Explain, yes, excuse, no - that is one horrible 'update' to the classic Gil Kane costume. Previously, Ryan wore a suit similar to the original, yet it was all his own, and he looked great. This TV-influenced look, though, is clunky as all-get-out, just awful. It's ironic, the Legends of Tomorrow producers would likely love to get away with the skintight look; comic books actually can, and should. Ray looks a thousand times better in his short appearance in traditional garb than does Ryan on this cover and in the preview art released by DC.
As for Ray, I don't believe he's really lost, I reckon this is him teasing out the heroism he suspects is in Ryan - he'll be off on a sub-atomic beach, being served tiny cocktails by a blue-skinned wench.
Thinking of Ray's loincloth days, when he became a mini-Conan the Physicist, there's a reference to it on the first page. 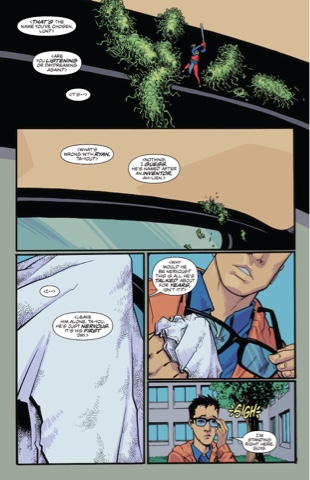 I'm confused. Here's Ryan atop Ryan's specs, in a scene recalling the Sword of the Atom mini-series from the Eighties, yet Ryan hasn't even met Ray at this point. Is it part of the daydream his parents mention? That's one very specific/prophetic image given he won't become an Atom for three years.
Longtime fans likely did a double take when I mentioned Adam Cray... yep, that's the guy who was the temporary, Suicide Squad Atom when Ray faked his death. I suspect he's working with Ray to mould Ryan, as he seems to be stealth training Ryan in physicality as Ryan observes Ray's heroics. 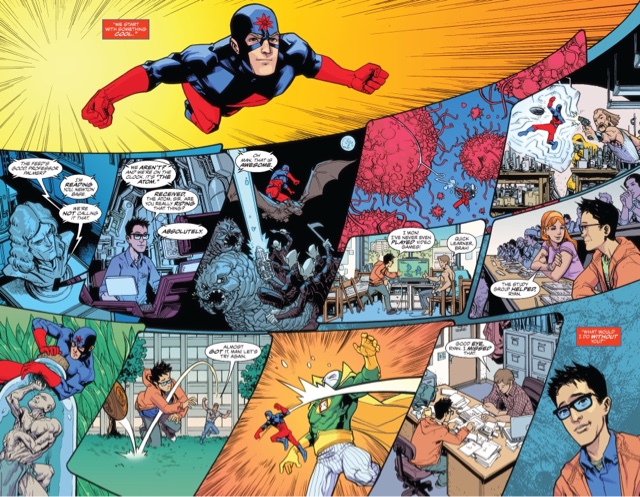 I may be overthinking. It could be a mere nod to old continuity. Lord knows, I get overexcited at the mere mention of Stanhope University, Linda Danvers' Silver Age college. Not coincidentally, Steve Orlando - writer of this comic and, soon, the JLA - is handling the current Supergirl book. Here, he does a splendid job of making the characters likeable and the situations intriguing. As I said, I want more, especially if he'd give us the wacky Ivy Town created by Grant Morrison and Gail Simone. Goodness, that had aliens and Lady Cop!
This issue is billed as a DC Rebirth book and fulfils the mission statement in returning to us a Ray Palmer who's lived through his Silver and Bronze Age tales, married and divorced Jean Loring and come out the other side. I love that, and Ray has always been a favourite, so while I like Ryan, I don't want Ray sidelined right out of the stories.
Where the Rebirth doesn't seem to be in operation is with Ryan - so far, he's a nice guy, super-clever, but noticeably less fun than the previous version. It seems more like he's being New 52ed than Rebirthed, that is, tweaked unnecessarily. And the previous Ryan was returned to continuity just last year in Convergence, so why not pop him back into New Earth society? Still, there are signs of life, especially at the end, and Orlando is ruddy good, so I shall reserve part of my judgment.
I don't think I've seen Andy MacDonald's art since DC's intermittently entertaining Future's End series and I'm glad to see his work here. His slightly rough-edged line is reminiscent of the late Steve Dillon's, and he's a whiz with body language. Just look at the way Ryan is sliding backwards as Ray lunges at him. 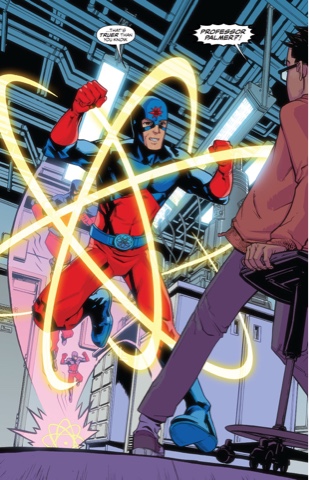 Bring on the monthly, and give him the regular job, along with colourist John Rauch and letterer Clayton Cowles.
MacDonald and Rauch also provide this issue's alternate cover, which I prefer to the mass market affair by Ivan Reis, Joe Prado and Marcelo Maiolo because it's recognisably the new Ryan. Neither image, sadly, gives us any sense that this is a tIny Titan - yes, he's swimming among atoms or protons or something, and standing on what must be a wee menacing monster, but if you don't know.... plus, he's huge on the main cover, filling almost all the space. 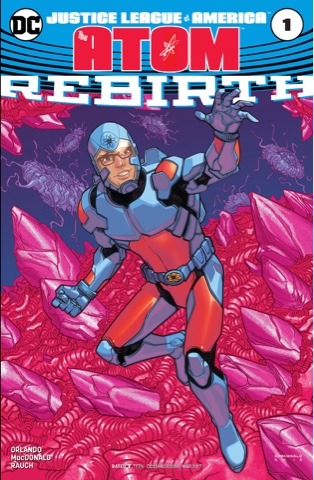 Quibbles aside, I enjoyed this one-off massively, from the arc of the story to small details such as the name of Ryan's hall of residence. Let's hope the other three Justice League of America: Rebirth specials - Vixen, the Ray and Killer Frost - are as good.
Andy MacDonald Clayton Cowles. Ivan Reis John Rauch Justice League of America: Rebirth - The Atom #1 review Marcelo Maiolo Steve Orlando