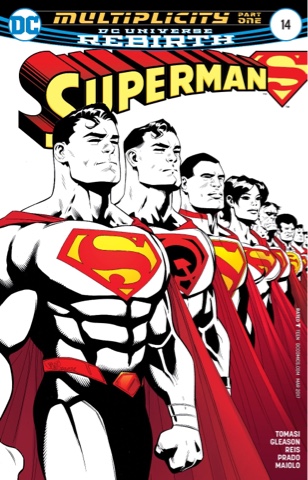 The Russian Superman from Earth 30, the Red Son, appears in front of our All-American Boy and asks for help. He's being pursued by the Gatherers, terrifying monsters who want to consume him on behalf of someone known as Prophecy. And It's not just him they're after - they want to consume Supermen from throughout the Multiverse. Several arrive on the scene in Red Son Superman's wake, and you might expect them to be thrilled to find another there. 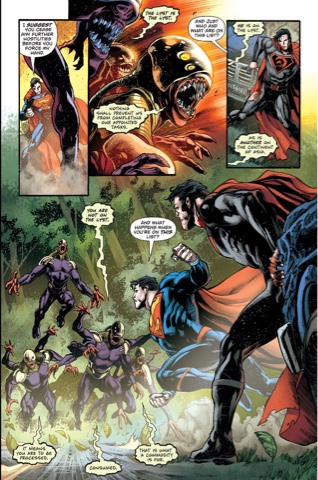 They do have a target on New Earth, but it's not Clark, it's Kenan Kong, the New Super-Man of Hong Kong who's partly powered by the recently departed New 52 Superman. Our Superman isn't even on the Gatherers' radar, as he learns when help arrives. 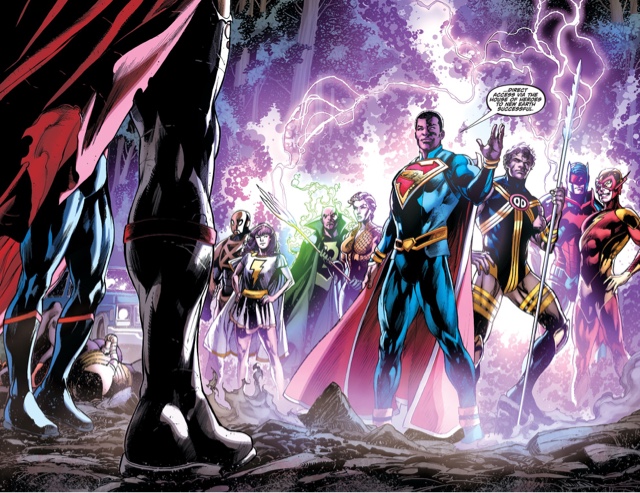 It's the Justice League Incarnate, the parallel planet-hopping version of the classic team from Grant Morrison's ambitious Multiversity series. Led by President Superman, they take the two other Kryptonians to Hong Kong, just in time to see the monsters haul off Kenan. The JLI's attitude seems to be, oh well, thanks for trying Superman, carry on, we'll handle things. They're out to save as many Supermen as they can, but writing off any who succumb to the Gatherers' black goo. Our guy thinks they can do better. 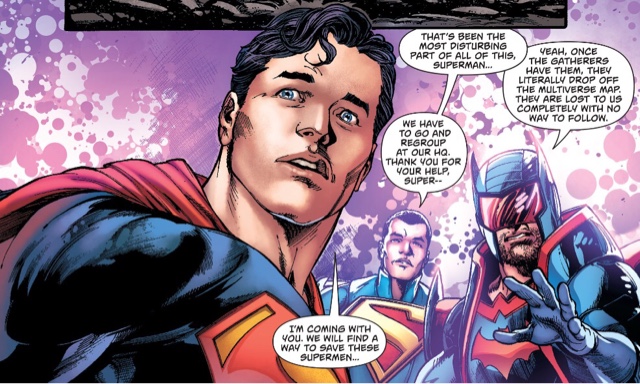 They may not know him from Adam, but the Superman of New Earth - the post-Crisis Superman - can't help but step up to the leadership plate... expect everyone to get a big dose of inspiration, and maybe even optimism, anytime now.
One version of Superman who isn't feeling optimistic is the latest victim of Prophecy's machines, who meets a surprising fate in the final pages.
Well, this is huge fun, a mini-Crisis in the Superman series - so long as it doesn't end with current Superman, Lois and Jon being cast into the usual white limbo, I'm good with whatever happens. In this first part, writers Peter J Tomasi and Patrick Gleason give us a classically confident Superman, as quick with his wits as with his powers. 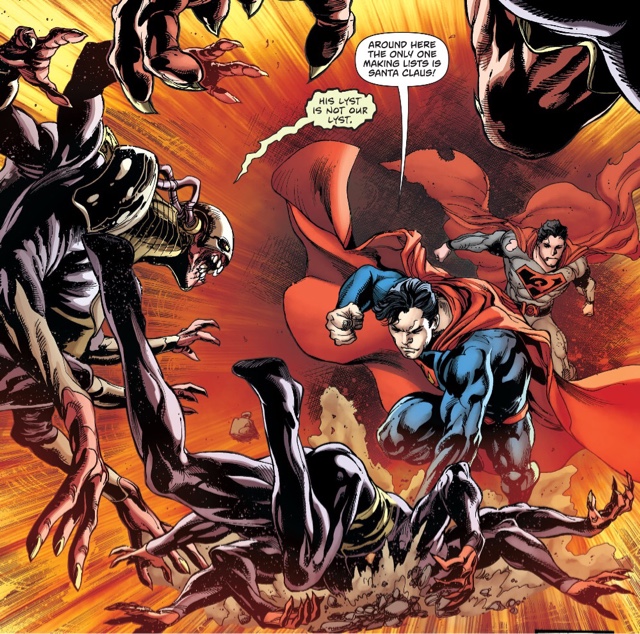 OK, it's a Santa gag, but we are still within the 12 Days of Christmas so it gets a pass.
There's also a well-realised moment of melancholy. 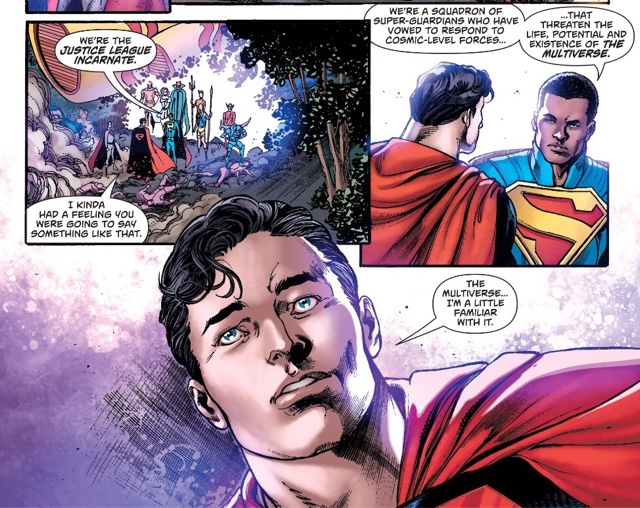 Why is our Superman unknown to the JLI and Gatherers? It must be to do with him having come from another version of this world; as of the recent Superman Annual #1, in which he teamed with Swamp Thing, his vibrations and spirit are in sync with his current home - maybe this has made him invisible to anyone tracing Supermen. All theories welcome!
The Gatherers are a rum lot, with their Lyst/list obsession they remind me of, well, some of the keener comic collectors out there.
In a nice touch editors Andrew Marino and Eddie Berganza bring in Ivan Reis and Joe Prado, the art partners behind the Multiversity bookends, and it's great to see them draw President Superman Calvin Ellis and co again. Reis provides layouts, Prado finishes and there's a classic Crisis vibe to the pages. A shout-out, too, to colourist Marcelo Maiolo and letterer Rob Leigh for helping bring things to life. My favourite moment is the final page, a surprise perfectly captured - so I'm not posting it here! 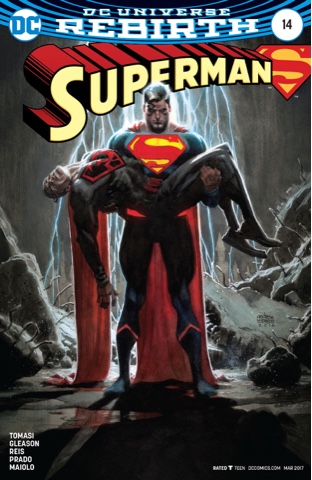 How about I show you Andrew Robinson's variant cover instead? Almost inevitably, it's a riff on the near-legendary Crisis on Infinite Earths #7, but instead of Supergirl, Superman holds his Red Sun counterpart. If only we had the Justice League Incarnate in the background, weeping... The regular cover, by Gleason, inker Mick Gray and colourist John Kalisz is trade paperback ready, with the limited palette making things feel pleasantly meta.
I don't know how many issues this story will last, but it's building to be big.
And Marino Andrew Robinson Eddie berganza Ivan Reid Joe Prado John Kalisz Marcelo Maiolo Mick Gray Patrick Gleason Peter J Tomasi Rob Leigh Superman #14 review