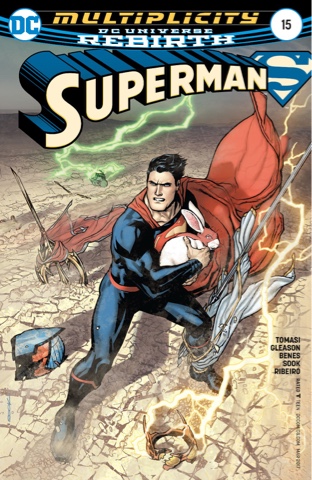 Multiplicity continues with our Superman leading Justice League Incarnate on a rescue mission. They're out to extract the Supermen of as many worlds as possible before the hungry hordes of a villain known only as Prophecy can consume them.
In a way that's slightly reminiscent of the Earth 3 scene in Crisis on Infinite Earths #1 (sadly, now wiped from continuity) the issue opens with the Justice League of Assassins trying to protect their Man of Steel. 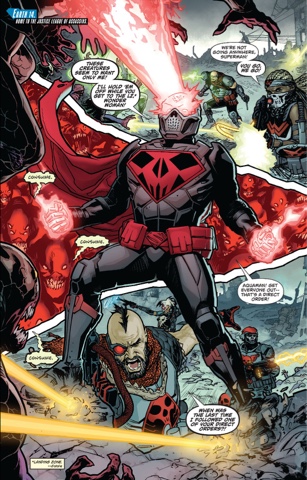 Then it's off to the House of Heroes on the Orrery of Worlds, where the Incarnate heroes are headquartered. There, Superman learns more about their mission to protect the Multiverse, and Harbinger reveals the fate of the Assassins of Earth 14. That prompts Superman to come up with his plan. 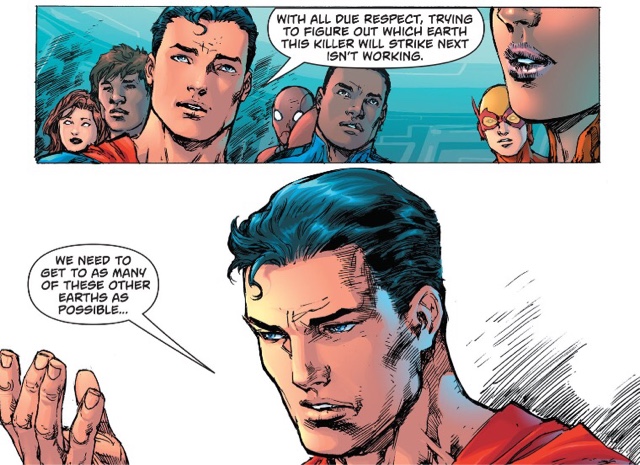 The stakes are high but the fun is foremost. 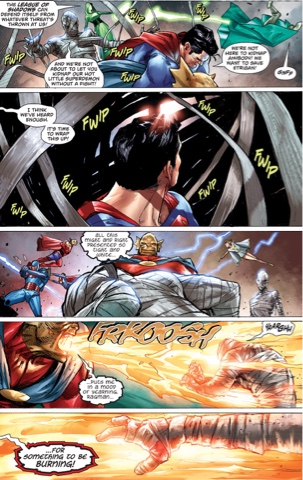 And it's great that even though he's taken part in many a Crisis, Superman can still be awestruck by the variety of paths he might have taken.

Back at HQ, and with several Supermen saved, our man comes up with another plan - one he may not survive.
This is your classic middle chapter, not big on revelations but action-packed and full of satisfying moments. The Superdemon of Earth 13, for example, with his rubbish rhymes.. 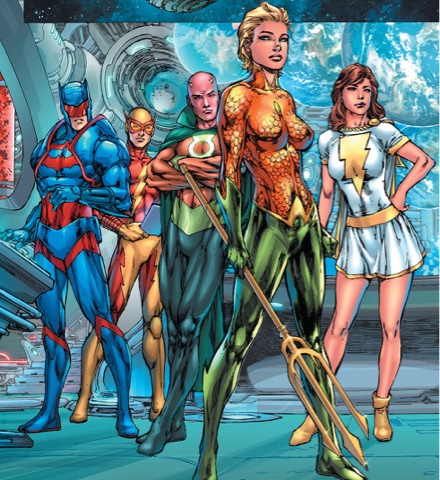 ...and just seeing a recognisable Mary Marvel after the mess DC's New 52 made of the Shazam concept makes me smile.
Writers Peter J Tomasi and Patrick Gleason deliver another confident, fast-paced script for what's shaping up to be quite the epic. Their Superman may not quite know how he fits into the universe but he knows himself and when he steps up to lead this unfamiliar League, there's not a whiff of dissent. And the final page brought the John Williams Superman march soaring into my head.
The art is split between four illustrators but the nature of the story, zapping from wold to world with side trips to the House of Heroes, lends itself to different styles. Ryan Sook, Ed Benes, Clay Mann and Jorge Jimenez produce dynamic, nicely composed pages with the only thing I don't like being Benes' serpentine, overly pendulous Aquawoman. Sook delivers his pictures in full colour, while his colleagues have a trio of colourists finishing the pages. Letterer Rob Leigh, as ever, is on hand to get the words to us in fine style. 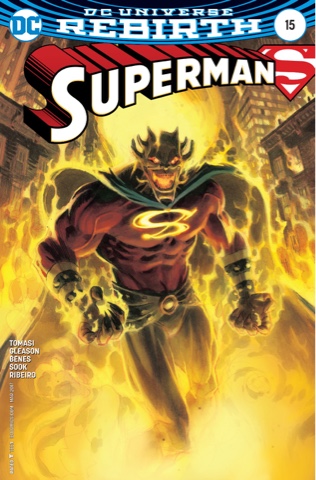 Often I like the variant cover image more than the regular one, the artists seem to have more room to 'play'. This time, though, the 'main' one, by Ryan Sook, gets my vote, Superman protecting the devolved Captain Carrot is all kinds of adorable. Which isn't to say Andrew Robinson's Super-Demon isn't hellishly good.
As a sequel to Grant Morrison's Multiversity, this is less ambitious but huge fun nonetheless. Roll on the conclusion.
Andrew Robinson Clay Mann Ed Benes Jorge Jimenez Patrick Gleason Peter J Tomasi Rob Leigh Ryan Sook Superman #15 review