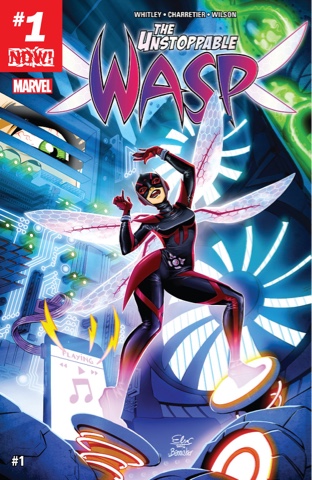 The Mighty Thor. The Invincible Iron Man. The Incredible Hulk... Marvel have long loved their adjectives, and now here's another - Unstoppable. It's not a word you'd immediately associate with a tiny character. Indeedy, original insect Avenger Janet Van Dyne used to describe herself as 'the Winsome Wasp'.
So why 'unstoppable'? That's revealed at the end of this debut issue for Nadia, daughter of Hank Pym and first wife Maria. She's recently arrived in the US from Russia after a very tough upbringing, and learned the father she's never met is lost. But is she bitter? 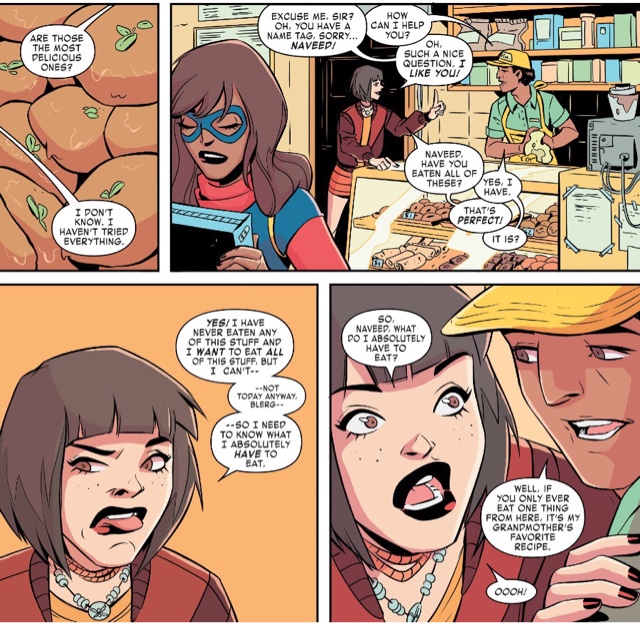 This is one sunny young woman. The issue begins with Nadia accompanied by Ms Marvel Kamala Khan as she heads for the immigration office to sort out her US citizenship status. 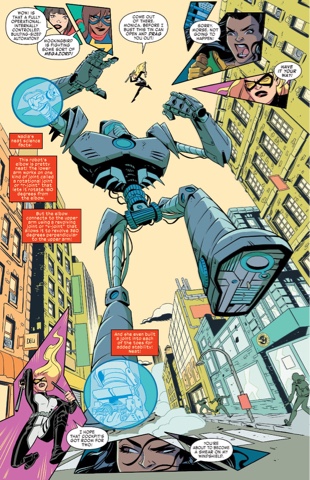 Soon, though, she and Ms Marvel are smack bang in the middle of a fight between Mockingbird and one of Marvel's rare female mad scientists, whose outfit of choice is a stolen iron giant.
And while all three women play a part in saving New York City, it's Nadia's smarts that save the day. As important, though, is her personality, which catches her foe offguard. 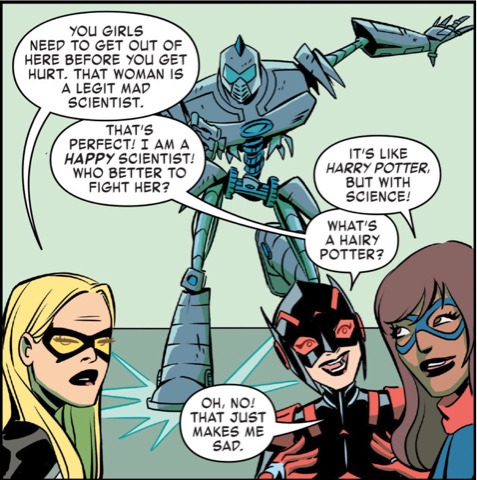 After the threat is over, a surprise for Mockingbird. 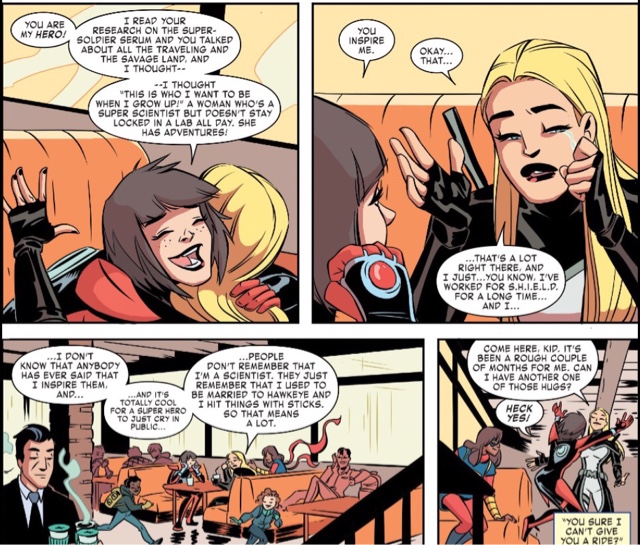 That leads to Nadia finding her mission, one I urge you to learn about for yourself by buying this book now; Marvel Comics are so expensive that for most comics, I wait six months to read it on Marvel Unlimited. This, though, is so much fun that I'm not hanging about.
Writer Jeremy Whitley - the brains behind the delightful Princeless series - does a wonderful job. Nadia is so happy she makes Squirrel Girl look like the Grinch, yet she's never cloying. There's nothing saccharine here, Nadia knows there's evil in the world - how could she not, given her upbringing by Russian spymasters? - but she rejects it. She wants the world to be a better place, and she has ideas on how to make that happen. And as someone who grew up reading Barry Allen's Flash Facts, I love 'Nadia's  Neat Science Facts'.
Ms Marvel is on good form, but she's strictly cameo. Mockingbird, though... wow! For the first time in years, I like this character. In revealing that she's been inspired by Bobbi Morse's work as a scientist before she became a super-spy, Nadia inspires Mockingbird. 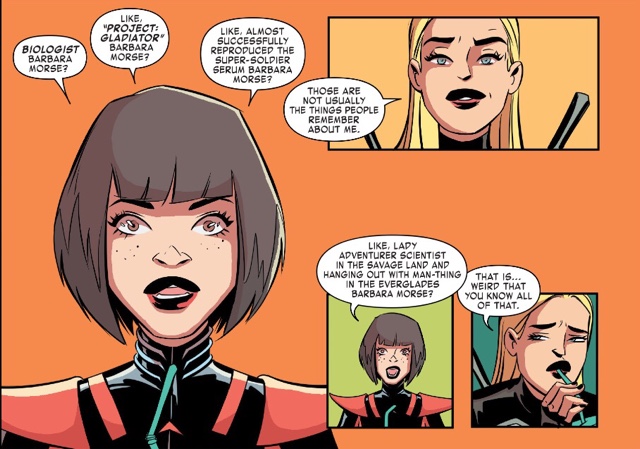 Yes, the comment about nobody ever remembering she was a scientist is a bit meta, but that's icing on top of the storytelling cake. I don't know if Bobbi will be a regular in the book, but this is a great scene, as much due to the lively artwork of Elsa Charretier as Whitley's peppy script.
Charretier impressed in the recent DC Rebirth Holiday Special and it's great to see her grab the opportunity Whitley provides for some more inventive layouts. Nadia looks confident but not cocky, Bobbi's emotions convince and I can't recall seeing a robot throw shapes with such conviction. Hellcat colourist Megan Wilson does a fine job but I'd prefer to see richer hues - Charretier's work had extra visual pop when she was partnered with Hi-Fi at DC. And I've never been a fan of the colour block shading style Wilson favours, which was prevalent at Marvel a few years ago. I'm not saying swap one colourist for the other, it's a question of taste and tones, not talent. Joe Caramagna's lettering is suitably cheery; I don't know if he came up with the cover logo, but I'm not keen, it's too low-impact and the 'Unstoppable' modifier looks dashed off.
So, I have a couple of tiny quibbles but were I a bestower of stars, not a second of twinkle would be lost - Unstoppable Wasp is a wonderful comic and if there's a young female superhero fan in your life, subscribe now.
Bobbi Morse Elsa Charretier Jeremy Whitley Joe Caramagna Kamala Khan Megan Wilson Mockingbird Ms Marvel Unstoppable Wasp #1 review