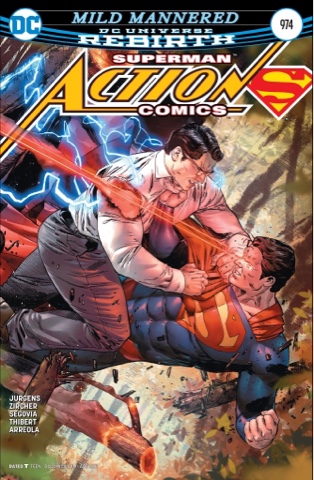 Superman has zoomed to his Arctic Fortress of Solitude In a desperate bid to save Lana Lang, who's been brought to him by her boyfriend Steel. Major domo robot Kelex examines the self-styled Superwoman and can't figure out what the Kryptonian energies she inherited from this world's younger Superman when he died are doing to her. In a moment of lucidity, Lana drops a hint regarding the ongoing mystery of what really happened to this Earth's Clark and Lois.

Meanwhile, Kelex gets an alarm from the other Fortress, in the Himalayas, alerting him that someone is trying to gain entry. This almost tips Kelex into an existential crisis. 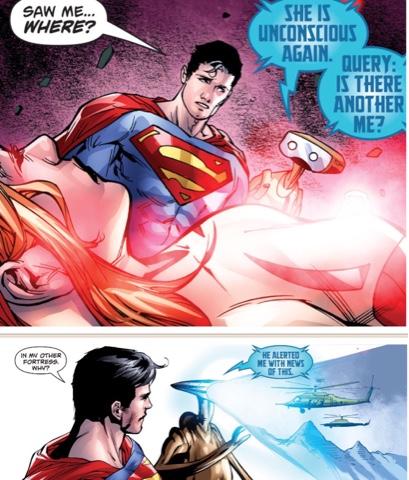 Superman, though, won't waver from the crisis at hand. 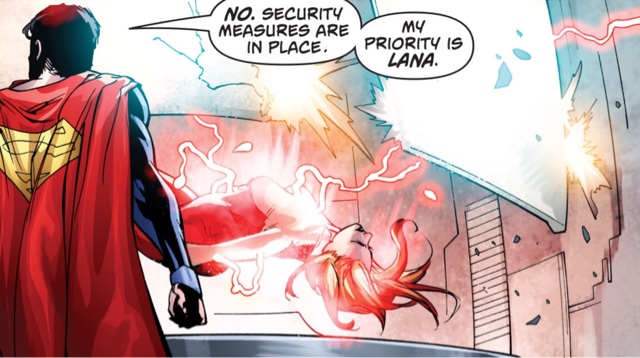 And his focus pays off, as he comes up with a stop gap solution that dampens down her burning body.
Wife Lois, meanwhile, is back in Metropolis, putting her investigative skills to bear on the mystery of the non-Super Clark who's shown up and slotted into the Daily Planet role vacated by the recently dead younger Clark. There's an ironic moment as we get Lois's take. 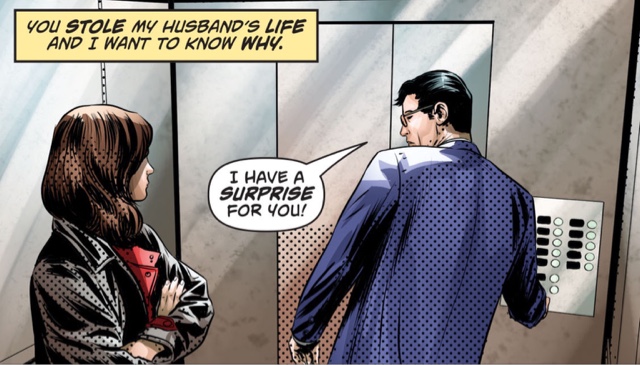 That's a bit rich given her hubby took over the role of this world's Superman. 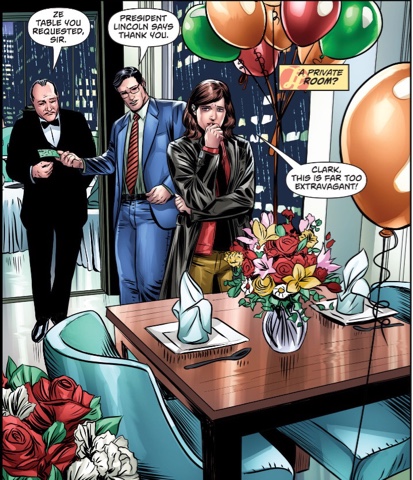 Lois' thoughts are interrupted by the earlier-than-arranged arrival of DoppelClark, who has thrown out the idea of a casual meal at Bibbo's for a room in a swanky private restaurant and a, not indecent, but inappropriate proposal. Oh, and his 'chauffeur-driven limousine' deserves a second look.
The mysterious team trying to break into the mountain Fortress, meanwhile, is heading for big trouble... 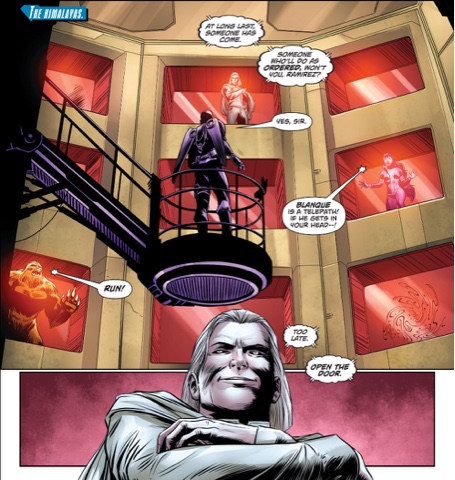 I realise Blanque is incredibly dangerous, as are other occupants of the prison wing, but I hate the idea of Superman as jailer - you'd think having once executed Kryptonian murderers, then had a breakdown, would put him off such things. Is there not an intergalactic court linked to a space prison? I'm sure the Green Lanterns would be willing to offer a Sciencecell or three.
Back in Hamilton County, with things calm at the mountain Fortress, the Arctic version supposedly secure and DoppelClark having been sent away with his tail between his legs, Lois and Clark have supper with latchkey son Jon. Outside though, someone is watching, growing angrier...
If ever there was an argument for Nineties-style numbered cover triangles, this issue is it - the opening looks to follow straight on from the recent Superwoman #7's ending, but that had a brown-haired Lois at the scene of Lana's trauma, apparently the older Lois from this issue. The ghost version Lana has been seeing in Superwoman is black-haired, apparently her dead frenemy. And yet there's no reference here to older Lois having any link to that dramatic ending - while her husband is trying to save Lana, she's calmly creating a Wall of Weird Clark.
And the ending of this issue of Action Comics looks to link directly to last week's Superman, in which Jon and Kathy met a mad cow, but if that's so the watcher in the corn has been there at least a day, which doesn't work.
Maybe there's an explanation beyond a failure of editorial oversight, but triangle cover numbering, or more editorial notes, would at least let us know if things aren't meant to fit with something we've already read.
I'm puzzled as to why the Superwoman business is in this issue, given the upcoming Superwoman #8 is continuing the dying Lana business. I'd rather all the space went to the story strands native to this series - writer Dan Jurgens is doing a terrific job amping up the mystery and tension as regards DoppelClark and the Fortress invaders, and surely anyone reading Superwoman alone should be able to find the important stuff there?
Jurgens really does write one of the best Lois Lanes - intelligent, determined but human enough to make a mistake. And his Clark is no slouch, with his refusal to leave Lana's side as it should be... but like Lois, he can get it wrong, as he does here by assuming his mountain fortress security alone is enough to protect it; when someone as insanely deadly as Blanque is there, you call for back-up.
One quibble I do have is that for two people working in the communications industry, Clark and Lois seem terrible at keeping one another appraised of their daily activities. It's possible they swap info behind closed doors, away from Jon - and we could read this sequence as a hint that such is the case - but it'd be great to know that it's definitely happening. 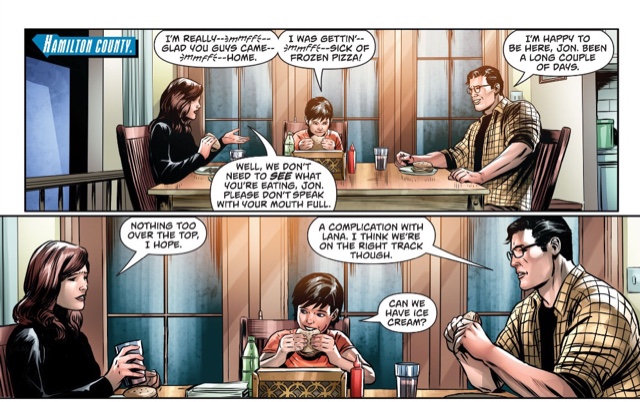 The art is shared by Patch Zircher, and the team of Stephen Segovia and Art Thibert. If I've gotten the breakdown of work correct - credit page details would be so useful - Segovia is doing the Superwoman stuff while Zircher handles Lois and DoppelClark. Segovia has to do a lot with just two pages at the start, over four decks of panels, but as ever, acquits himself nicely, there's a real sense of danger around Lana, helped by Ulises Arreola's blistering colours. 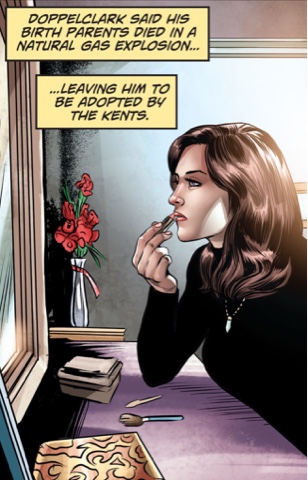 And Zircher's trying-too-hard Clark, complete with classic blue suit and stripey tie, is king of the unnerving grins. My favourite panel, though, is a simple - but gorgeous - shot of Lois getting ready for her night out. Is a Jurgens/Zircher Lois Special too much to hope for? 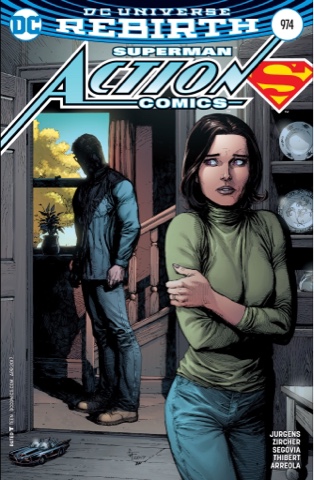