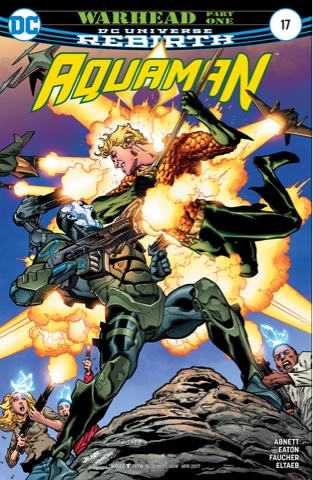 The war between Atlantis and the United States is over. Aquaman is a hero to the world and he's been invited to speak at the United Nations as a likely precursor to Atlantis being granted membership. While Mera tells Aquaman he went down well, for Arthur it wasn't just another address. 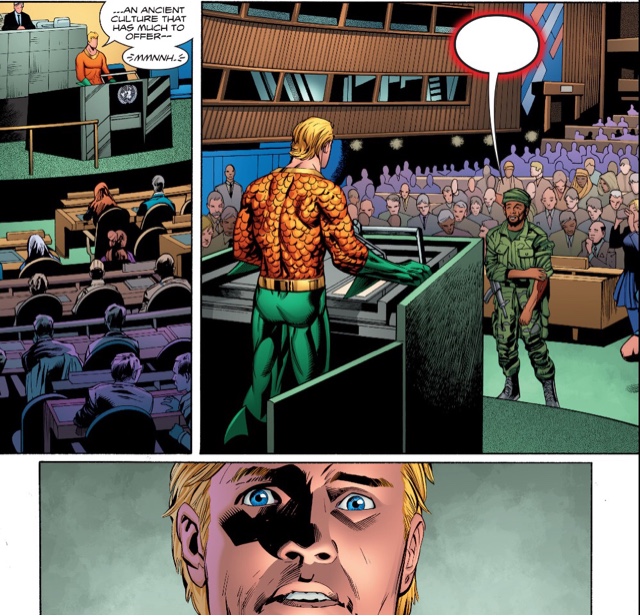 Who's the mysterious man with the bleeding arm? Why can't anyone else see him?

(Am I the only one who sees 'aquatelepathy' and thinks 'aca-mazing'?).
Arthur takes the direct approach and follows the man who isn't there and winds up being shot at for his trouble by.... 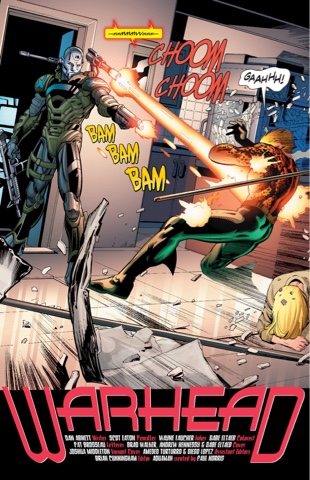 Yes Virginia, that is a splash page. In what's beginning to look like the result of a memo, here's another DC Comic that starts in the middle of the story, then flashes back. What's the point? This isn't a TV show discovered while channel-hopping that needs to grab our attention, we've already bought this comic. We know how comics work, that it's 90 per cent certain there will be action in the issue. Come on DC, listen to Julie Andrews and start at the very beginning - it's a very good place to start.
That pet peeve apart, this is another fine issue from Dan Abnett with his winning blend of heroics and humour - watch for Arthur's security detail's splendid codename for their charge. The supporting cast continue to deliver different perspectives on Arthur's decisions and while I've not yet got a handle on new villain Warhead, I'm all for Aquaenemies (oh heck, now I'm doing it) who aren't linked to the sea.
Abnett scripts regularly surprise us and this issue's 'I never saw that coming' goes as follows: 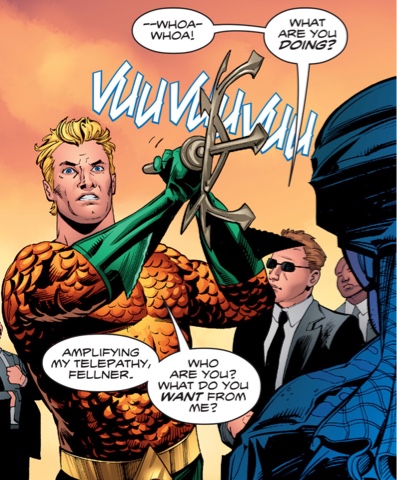 Do you think he gets satellite TV too?
The underrated Scot Eaton's pencils hit the high points with ease, bringing us such great images as Arthur leaping into action. 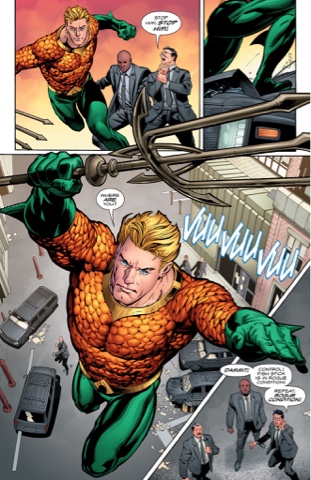 The smooth inks come courtesy of Wayne Faucher, while Gabe Eltaeb's colours help every page pop. Pat Brosseau's letters are as smart as ever, while Joshua Middleton continues his series of variant covers that has all reasonable people hoping for a book collection. The regular cover by penciller Brad Walker and inker Andrew Hennessy is thoroughly eye catching, with Eltaeb's choice of colours a big part of that. 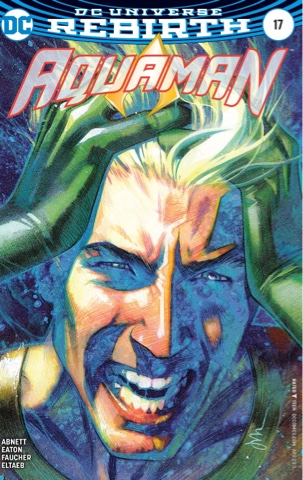