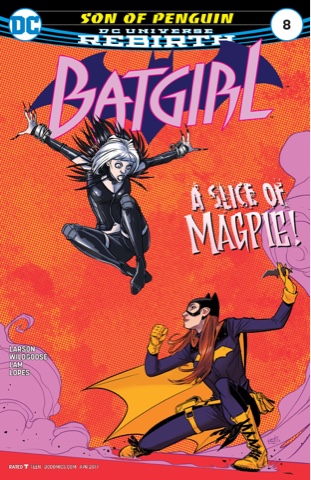 This is the sort of thing that happens when Barbara Gordon goes on a date. 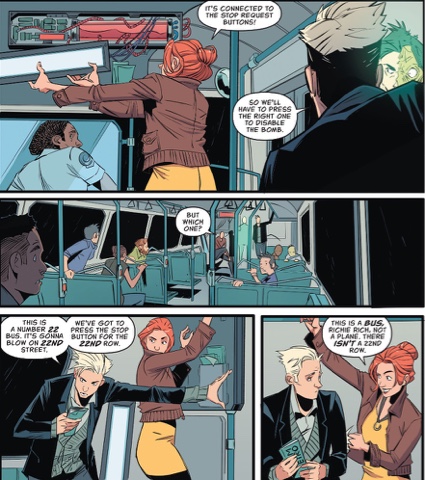 The cocky young man is Ethan Cobblepot, tech whiz and son of the Penguin. Barbara is wary, but as she said to Nightwing last issue, 'It's 50/50 he's evil, but are those odds really worse than anyone else I could date?' The off-duty Batgirl is trying to get his measure, and she's being admirably - or maybe annoyingly - straightforward as regards her curiosity. Ethan seems pretty transparent, relating that his mother - a waitress at Penguin's Iceberg Lounge - became pregnant by the ultimate jailbird, and was paid to go away. As a young adult, Ethan seeks out his father. 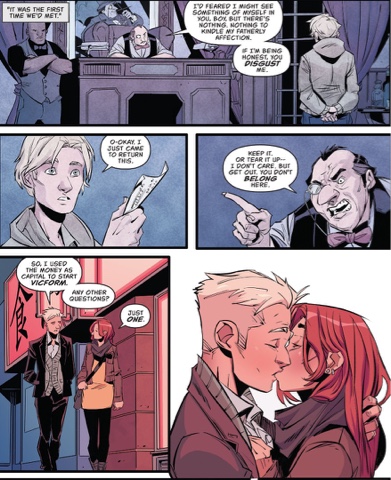 He sees nothing of himself? Er, nose?
Curiosity apparently sated, Barbara agrees to a second date and is pretty relaxed next morning when she meets the organiser of her new Saturday voluntary gig.  This issue's Man Most Likely to Be a Super-Villain award goes to... 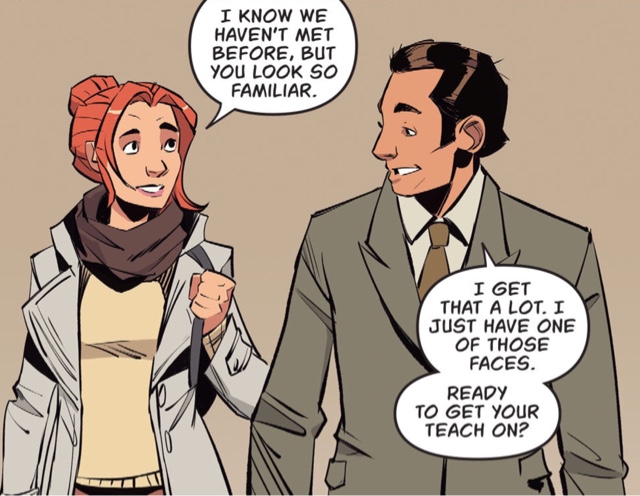 Barbara is teaching kids coding, and one girl, Esme, especially impresses her. After class we see that there's suddenly a campus-style pedestrian chaperone service in Gotham, Walkhome.
That night, Barbara heads to meet friends at the latest bar to open in Burnside, stopping en route to spy on Ethan, who's working late, but not acting in a suspicious manner. You know, like sneaking around spying on someone he's dating.
At the bar there's Barbara, Frankie and her new girlfriend Malaya, along with former flatmate Alysia and her wife Jo. Where Frankie was worried about telling Babs she's moving in with Malaya after a rent hike, Alysia is having a really bad day. 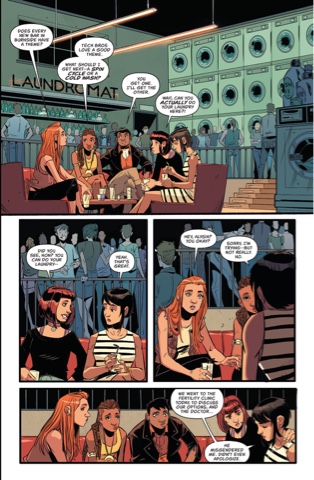 Barbara is torn away from the group when she notices a young woman being harassed by a drunk. Without needing to change into costume, she lends a hand and the girl summons a chaperone via the new Walkhome app. Said chaperone gets rough when the drunk reappears, and in her Batgirl disguise Barbara warns her off. And if it wasn't right there on the cover, I'd not spoil this great scene of recognition. 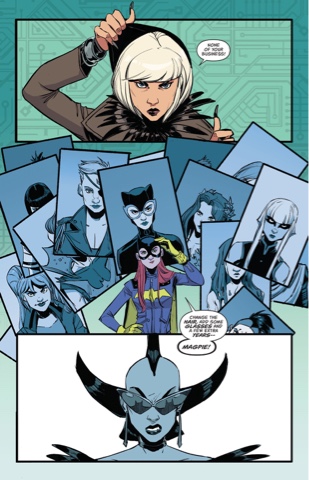 Magpie! The first villain of the post-Crisis era, a bird of prey who never really earned her wings, back with a new look that wasn't outdated a week before the book went to the printer. And apparently pretty rubbish at trying to go straight.
Barbara is more concerned that the problematic Walkhome app follows a similarly disastrous piece of tech called Streetsafe, and both come from Ethan's company...
So he's evil then. Or maybe not. It's a credit to writer Hope Larson that I can't tell whether Ethan is actually trying to live up to his father's name - a name he's using, as opposed to that of the parent who actually loved him - or just a very dodgy businessman.
A couple of things about this issue have me scratching my head. Given her memory trick in recognising Magpie, why can't Barbara peg Daniel Arroyo? And isn't it more than a little hypocritical to slam Magpie for protecting someone just as she's done for years?
But this is all so much more enjoyable than this DC Rebirth series' opening story, which saw Barbara fighting fortune cookies in Asia. Batgirl belongs in Gotham, even if it's the annoying hipsterville that is Burnside; to her credit, Larson satirises the locale, with its ever-changing bar scene populated by empty-souled millenials.
I'm embarrassed to admit I'd forgotten Frankie was lesbian, but of course she is - Barbara is the last straight gal in Burnside. Anyway, I like Frankie, and she and Malaya look great together.
The fight scene with Magpie is a tad short at two pages, reinforcing the idea that she's always going to be a Mort, but Larson wraps it up with a terrific one-liner that works beautifully with the visual provided by Chris Wildgoose. The latter joined as new regular artist last month and seems right at home, capturing the DC You Batgirl superbly, along with her environment. He's especially good at giving us Barbara in civvies - the young woman in the opening pages actually looks like someone you'd meet in 2017. 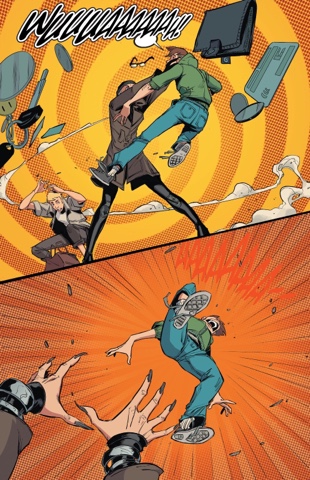 The new-look Magpie is better than any we've seen previously. And Wildgoose's action moments have a delightful dynamism, with my favourite being Magpie's slightly psychedelic takedown of the drunk. He's aided by the delicate, almost whimsical, inks of Jon Lam and the always apposite colours of Mat Lopes.
Wildgoose provides full-colour finished art for the bold cover while the alternate by Frances Manapul is a differently gorgeous preview of what may be coming up. 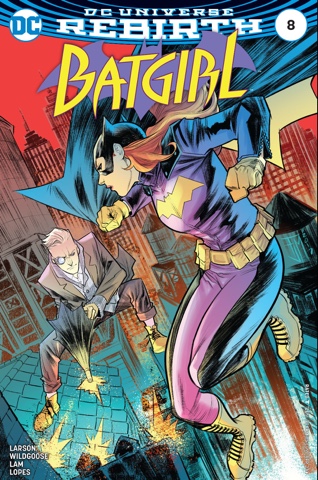 If, like me, you weren't a fan of Barbara's Asian adventure, this may well be more your cup of tea. Back home again, Barbara seems more grounded, more herself - and that means Batgirl can fly.
Batgirl #8 review Chris Wildgoose Frances Manapul Hope Larson Jon Lam Mat Lopes