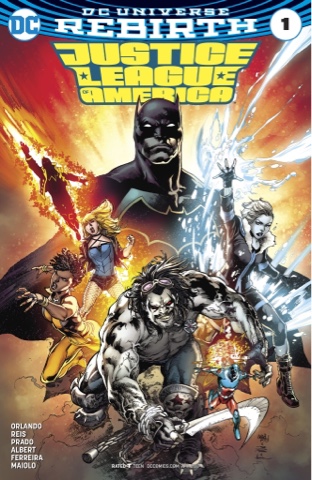 Batman and Vixen are patrolling Gotham, with literal super-model Mari McCabe demonstrating that the only animal she's not down with is bull. 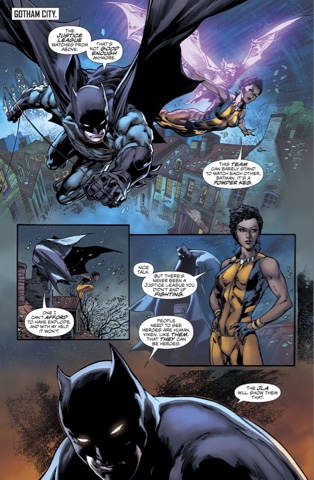 Black Canary and the Ray are helping victims of a blaze. Lobo is beating up Atlantean fire trolls. And Atom and Killer Frost? They're discussing the finer points of superhero nomenclature while trying to get the new Justice League of America's crisis detection systems online. And trouble they find, in New York, where a congregation exiting church are attacked by the other-dimensional Extremists. Having destroyed their world of Angor while trying to save it, they don't want Earth to go the same way. But their reasoning is a tad perverse. 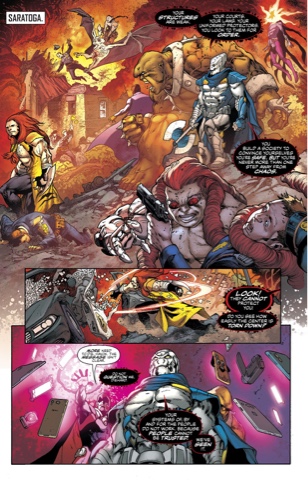 Teleportation gets the heroes there quickly, and battle commences. 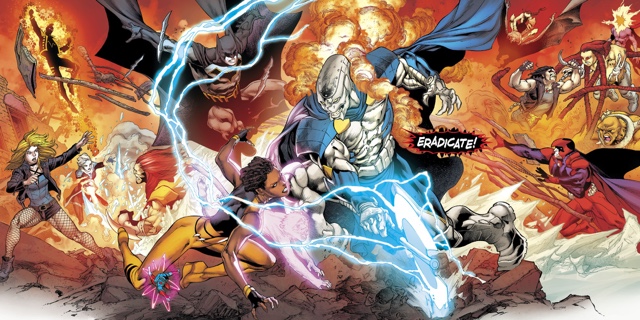 Writer Steve Orlando and penciller Ivan Reis give us the kind of big, loud fight which has always suited the JLA. What we don't get is proper introductions to all the bad guys, an old-fashioned roll call of names and powers. Yes, it's a bit old school, but this is a comic which brings back the ugly old 'Troubalert' name from Super Friends.
The characterisations are coming along nicely, from Ryan's understandable caution around Killer Frost to fellow newbie The Ray's nervousness when asked to take on the Extremists, who have always looked a frightening lot. The only thing that doesn't ring true is that the Batman, you know, this guy...

... would want a monster who murdered his entire planet on the team. A killer for hire. It's not even as if Lobo is a cool strategist like Deathstroke, he's an agent of chaos. I can find him entertaining - he fitted the old LEGION book very well - but Batman keeps saying his new team is meant to show that anyone can be a hero. Maybe that's true, but like Caitlin Frost, they should first serve some time for their crimes and at least show they want to be better. 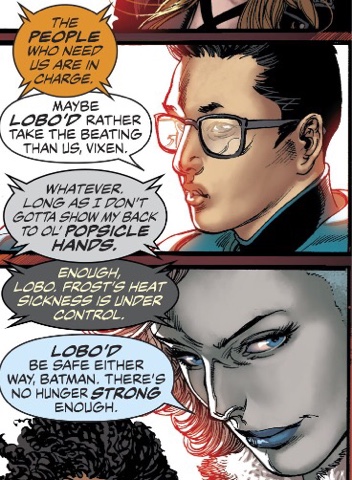 This moment intrigued - I don't recall the problem of Caitlin's deadly appetites being resolved on panel, but I am old, someone set me right.
Ace storyteller Reis does a tremendous job, and while he has three inkers in Joe Prado, Oclair Albert and Julio Ferreira, they're all regular partners so the work looks great throughout, with Marcelo Maiolo adding extra consistency with his vibrant colours. Little touches I like include Caitlin's off-duty hair, Gotham as medieval London and, despite the extra hoop, Atom's pink power glow that makes him easy to spot (we shall choose to overlook the extra hoop...). Clayton Cowles adds more drama with his emphatic lettering, while Reis, Prado and Maiolo produce a rather splendid poster cover (though I fear for Ryan's teeny legs). 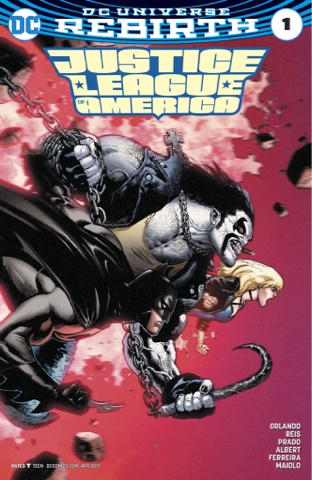 The variant is uncredited but solicitations say Mark Brooks; it's a powerful composition, but three characters with better colour contrast would have popped more, and I'm not a fan of the blurring effect at the bottom.
Unless the Extremists have their way, this isn't a world-changing debut, but it's solidly entertaining. I wonder if Orlando has something up his sleeve by having the new JLA's first threat be a team of, basically, seven Lobos. I look forward to finding out.
Clayton Cowles Ivan Reis Joe Prado Julio Ferreira Justice League of America #1 review Mark Brooks Oclair Albert Steve Orlando