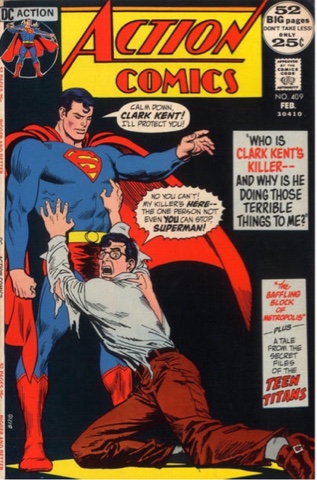 Awhile back I bought some random Superman issues on eBay dating from the early Seventies - a couple I already own but haven't read for years, and fancied having easily accessible, and some I'd seen referred to in lettercols but hadn't read for myself.
One such issue is Action Comics #409 and if I'd seen that on the stands as a kid there is no blooming way I'd have been able to resist it. Just look at the gorgeous Nick Cardy art (the clothing folds seem to be Cardy nodding towards Joe Kubert), the intriguing cover copy.
And inside I would've found a story beginning with reporter Clark Kent going to the Galaxy building on a quiet morning. 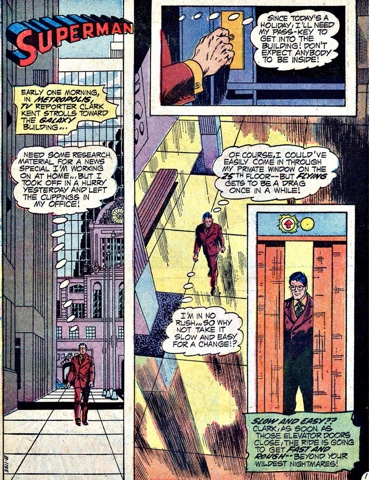 Just look at that lovely first panel by penciller Curt Swan and inker Murphy Anderson - they could've winged it with random blocks representing office buildings, but instead we get a rather grand municipal building. And may I have a 'private window' too?
Turn to pages 2 and 3.... 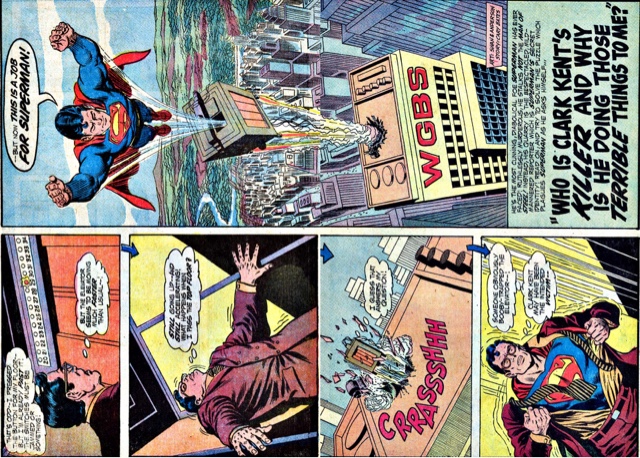 ... and we see that they've turned on their side. It's a great way to show the impact of the out-of-control elevator. I can't recall seeing any US comic do this until the Eighties, and the likes of John Byrne, but there's the master, Curt Swan, getting in first.
Superman ends the immediate danger and finds, under the lift, rocket boosters rigged to shoot it into the air when the doors closed. For some reason he concludes that Clark was the target. Oh, and we get a Science Fact! 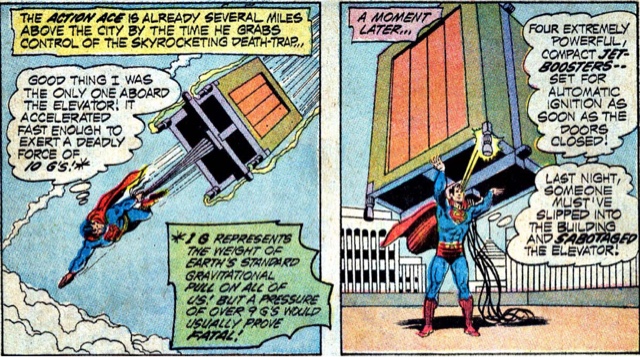 That evening, Superman flies down to the southwest, where he has a project on the go. 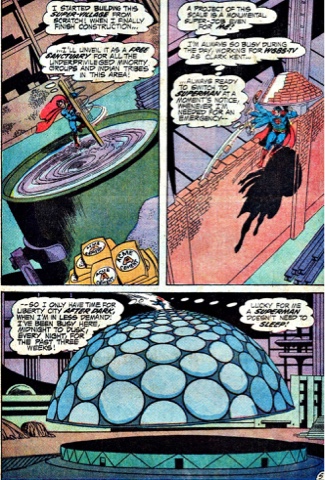 Why have I never heard of this? It's the Age of Relevancy and the original social justice warrior is building a futuristic community. I did wonder if this might be writer Cary Bates' response to issue #402's encounter with a southwest Native American cum Aztec people, but a quick check of that Leo Dorfman tale reminds me that by story's end they were rather nicely off.
Anyway, he's building something to help the poor, apparently without checking with them, or zoning planners, but still... it's another sharply drawn scene by 'Swanderson'. And being in the desert, of course he uses Acme Cement! And there's a line in there that immediately had me suspicious as to who Clark Kent's would-be killer is.
Next day, Clark returns to 344 Clinton Street after reading the WGBS news and finds himself strangely attractive. 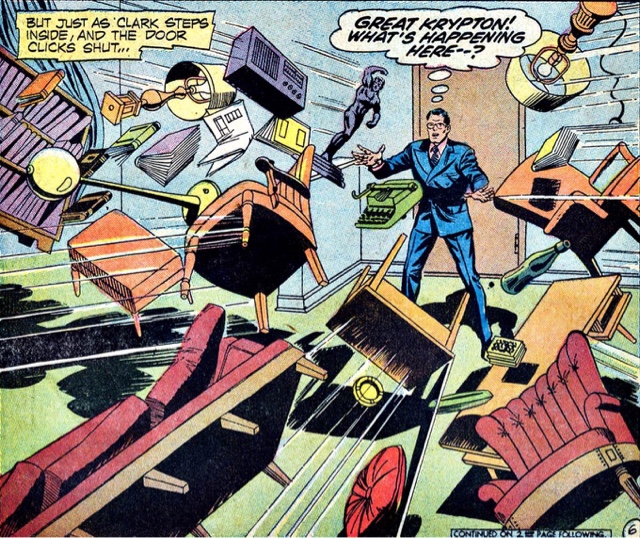 And then, someone appears. Nope, not the poor downstairs neighbours, but an alien being! Well, another one. 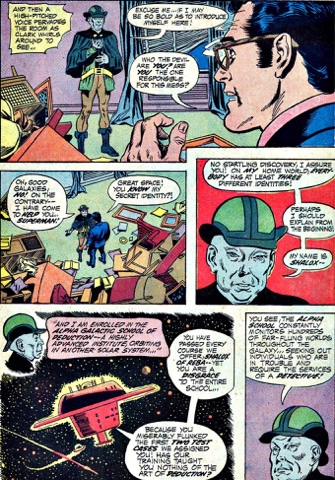 So after Liberty City, Bates gives is another great idea that, so far as I know, was never mined after this issue - a school for space detectives! 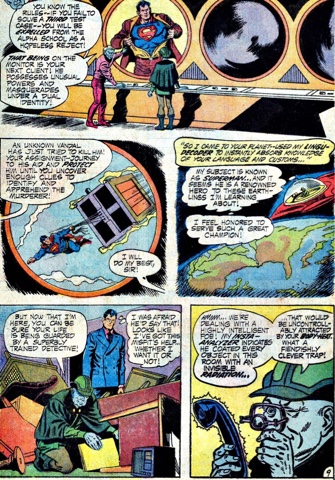 Shalox, It seems, has a touch of the Angel Second Class Clarence Odbody, and Superman is willing to help him earn his wings. Or magnifying glass. He appoints himself Superman's bodyguard.
Another night at the world's most super building site sees Shalox give Superman a whistle so he can wake him if the would-be killer makes another move while he's sleeping. 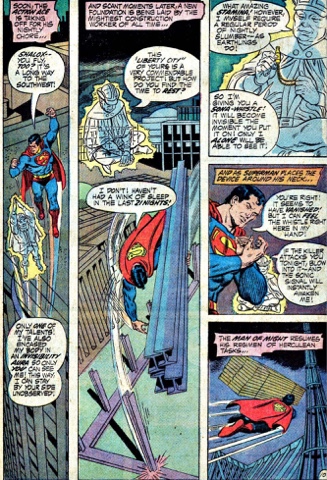 Another reference to Superman not resting. Hmm. Anyway, nothing happens, Shalox gets his sleep. He does have a chance to help out next day. 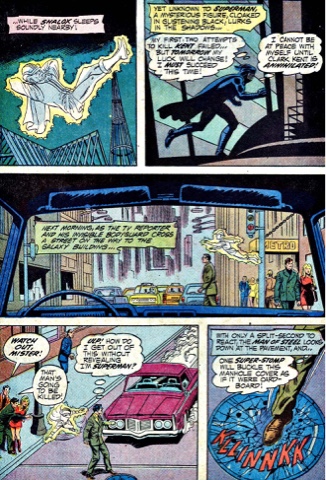 Bates comes up with the kind of imaginative/bonkers scene we rarely see today, when most writers seems to forget Superman has any powers outside of flight, strength, heat vision and invulnerability. 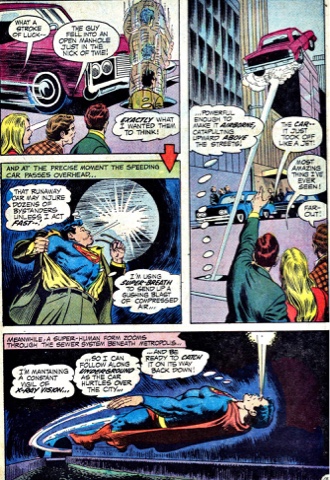 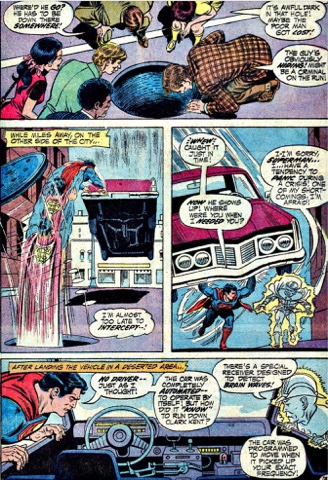 Having failed once more, the unknown assailant goes bigger. 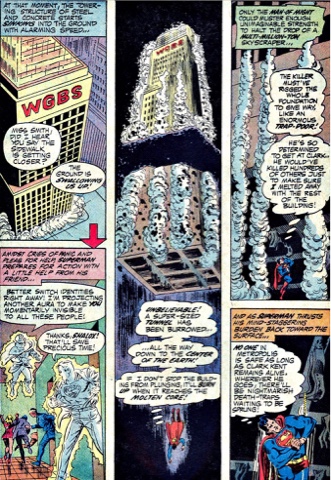 Who is this fiend with no regard for human life? It looks for all the world like Christopher Meloni! 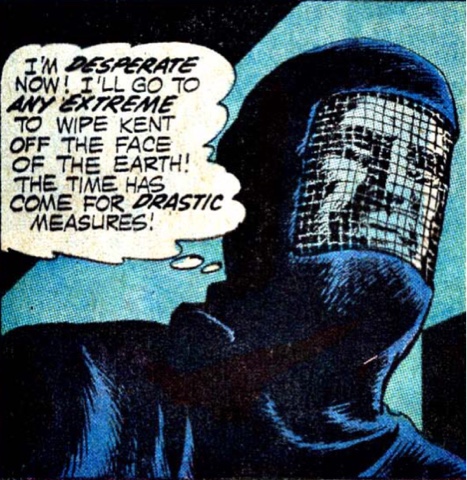 Superman comes to a drastic decision. 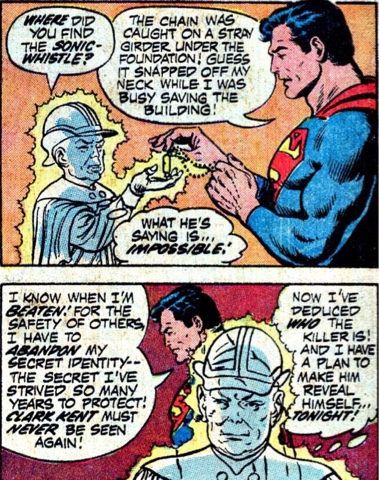 I'm amazed that at this point we don't get an editor's note along the lines of, 'Well, the clues are there - have you worked out who's trying to annihilate the Action Ace?' (Bates uses that nickname a lot this issue). And later...

This unshowy panel once again shows us how good Swan was with body language, you can see how downhearted the 'solitary figure' is by his pose. And the uncredited colourist really adds to the mood. Extra points for a classic >How ironic<. And then Swan shows off his, appropriately enough, action chops. 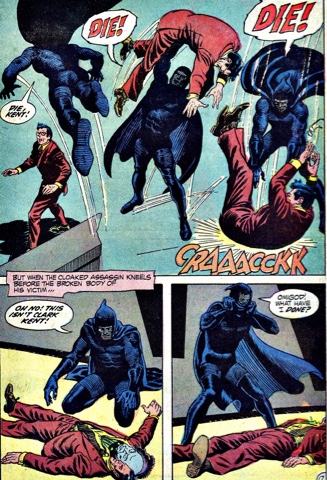 And all is revealed, compete with another Science Fact! 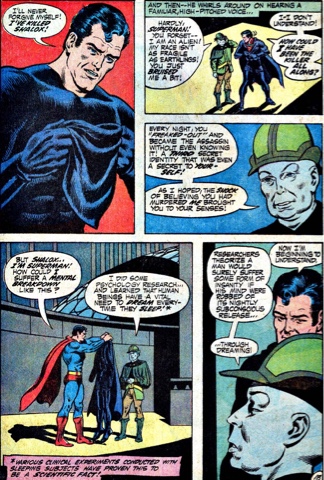 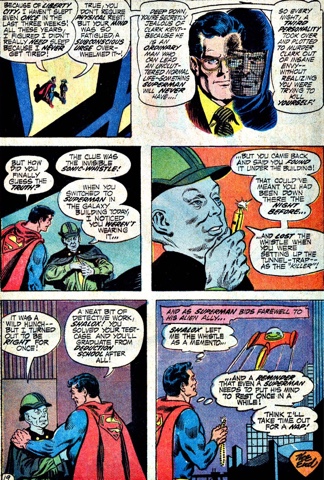 Superman would have killed an entire building's worth of people in his mental muddle, but it's OK because he was tired, and now he's off for 40 super-winks and Shalox wins his space detective spurs. The Bronze Age really wasn't so different from the anything goes Silver Age, was it?

And yes, it seems the symbolic cover did actually give the secret away, but how were we to know the answer was right there in Clark's dialogue? But what the heck, I love this story, with its fun mystery - easily worked out after decades of comics reading but I doubt I'd have gotten it at eight - and casually tossed-out concepts. A school for space Sherlocks? Liberty City? A society where everyone has three secret identities? I'd love to see a sequel exploring these ideas, maybe in novel form a la Elliot S Maggin's Last Son of Krypton or Miracle Monday. That would give plenty of room for a follow-up as Superman seeks counselling with a superhero psychiatrist - what a shame Doc Samson isn't in the DC Universe! (A couple of decades later, when the post-Crisis Superman had his breakdown, becoming a more violent version of Gangbuster, the situation was similarly waved away.) 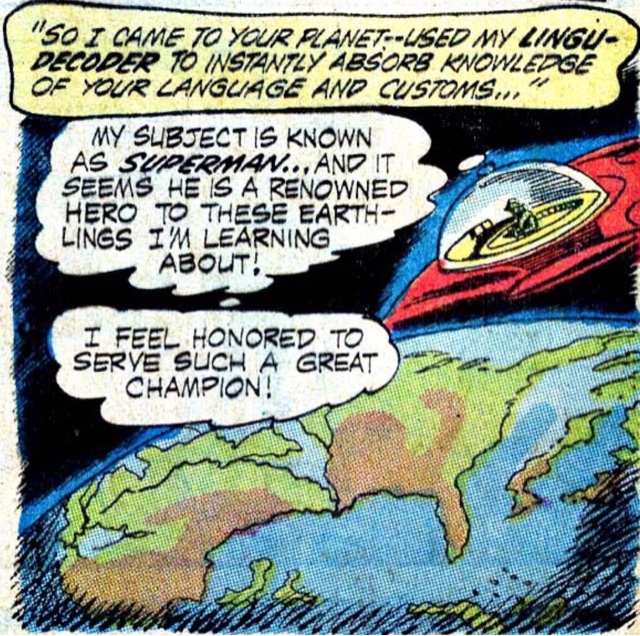 And it's a tiny detail, but I do like that Shalox comes from a part of the galaxy where, for once, Superman isn't massively famous.
The Swanderson art is superb throughout, from the masterful foreshortening of Superman on the opening spread to the dynamism of Clark's flying furniture. While Shalox is undoubtedly alien, he has such a distinctive face that I suspect Swan based him on someone.
As early Bronze Age Superman stories go, they don't come much better than this.
This 52-page issue also features a reprint of the first half of Teen Titans #4, by Bob Haney and this issue's cover artist, Nick Cardy, and a second new story featuring An Untold Tale of Superman. 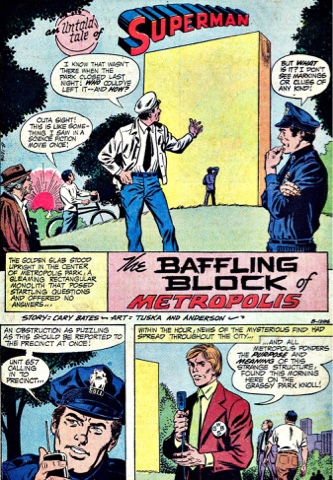 Not 'starring', mind you - I'm giving that honour to police detective Captain Horace Mitchell, who spends most of The Battling Block of Metropolis, again written by Cary Bates, guiding his men to attack said block. 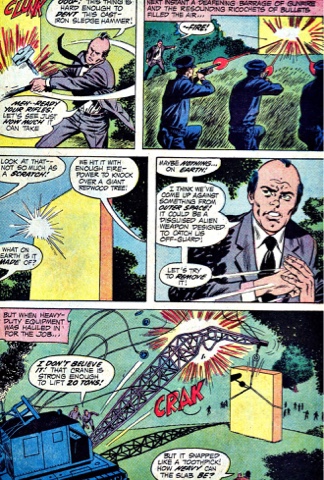 Superman, meanwhile, is forging a diamond into a tool. 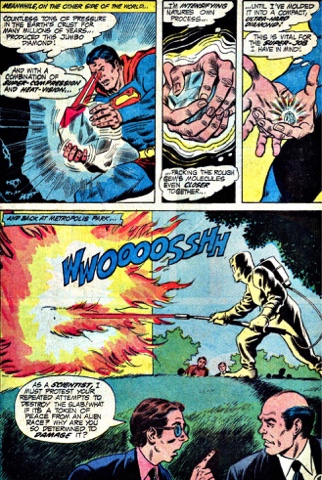 Giant yellow metal sheet. A super-tool. Yeah, you got it. 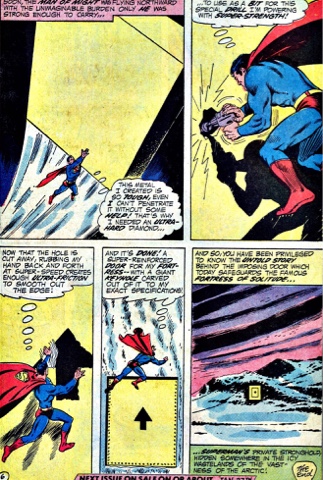 It's a fun short, from the splash page nod to 2001 to the rare partnering of Murphy Anderson with penciller George Tuska, an artist seldom praised, but I've always liked his clean storytelling style. He puts real life into the tale, with that large WHOOOSSHH panel being my favourite.
At this time DC was regularly using back-ups to solve mysteries you never knew were there, such as 'why was Krypton called Krypton?' and this is another entertaining entry.
All in all, this is a terrific comic book from DC's shortlived semi-reprint period - if you see it at what seems like a reasonable price, grab it.
Cary Bates Curt Swan George Tuska Murphy Anderson Retro Review - Action Comics #409 (February 1972)