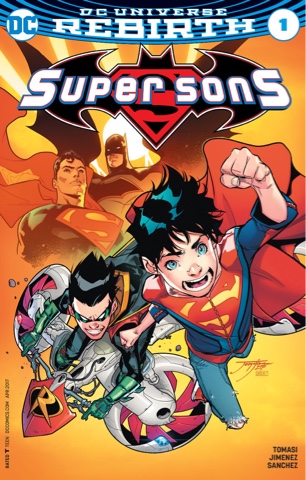 It's just another school day for Jon. He stands up for a kid being bullied and for his trouble becomes the target of an especially rough snowball fight. He could win this one easily, he has super strength and heat vision... but he has a secret identity to protect and more importantly, he doesn't want to become the bully.
Then he gets help from above. 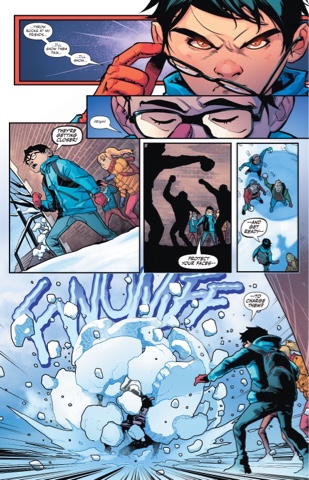 Damian Wayne, current bearer of the Robin name, is in town. He tells Jon he's there because he's bored, but if it wasn't already obvious, by the time he shows up at the Kent Farm to invite Jon on an adventure it's more a case of his wanting to spend time with his new friend. And these kids really have become good pals - look how they playfully bicker. 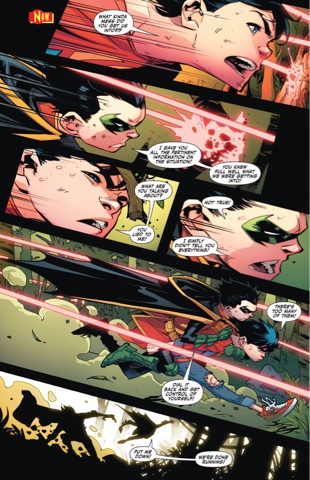 While children whose parents aren't superheroes tend to play hide and seek, or softball, or whatever, the Super Sons of Superman and Batman go to Metropolis, where Damian has detected a mystery. And by the end of the issue the quietly confident Jon and ever-cocky Damian may be in over their tiny heads.
I've been looking forward to this book for a while and lead creators Peter J Tomasi and Jorge Jimenez don't disappoint. Robin and Superboy delight at every turn, individually and together. I even like their supporting cast, one Bruce and Alfred, and Lois and Clark. The Kents - I still can't think of them as the Whites or Smiths or whatever their assumed name is this week - have a quiet moment together that scores massively on the adorability scale. 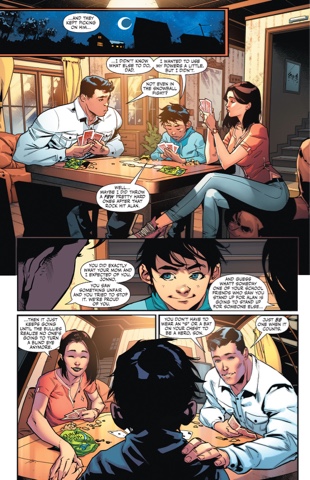 This issue also features a prologue introducing a very persuasive boy, and an in media res opening hinting at Toyman which the book doesn't catch up to by the end. I dislike cold opens enormously, but I cannot help but love this issue. The characters are appealing, the unlikely best buds set-up has potential and the art....
... oh, the Jorge Jimenez pages are just edible. Jon and Damo look and move like little lads, not Franklin Richards-esque stumpy adults. The action is kinetic, frenetic. And the storytelling is of a very high standard. Look, for instance, at this bus scene, in particular how bullying victim Alan is scared Jon's standing up for him will get him in bigger trouble. 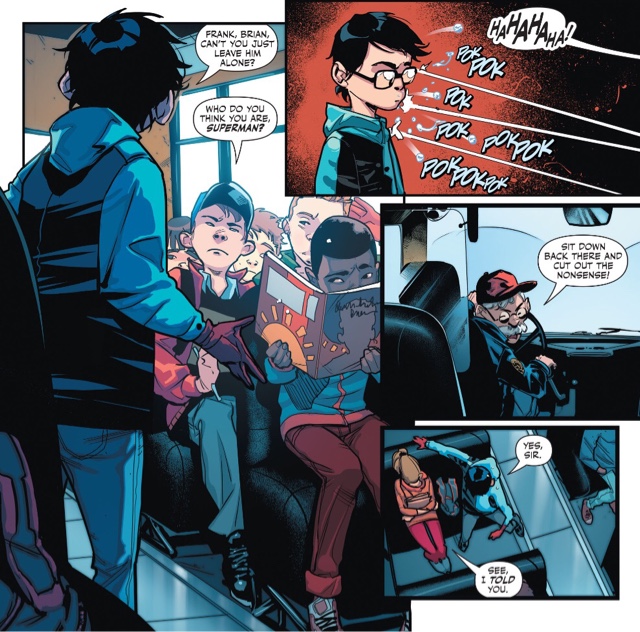 Every page is a treat, and little extras such as a Dark Knight homage add to the story rather than bring it to a full stop. I think it's safe to say Jimenez gets how comics work, and he has the perfect partner in Tomasi, who paces his tale superbly in terms of character beats versus modest action moments. Colourist Alejandro Sanchez keeps things natural but never dull, while letterer Rob Leigh sorts out the volume with style. 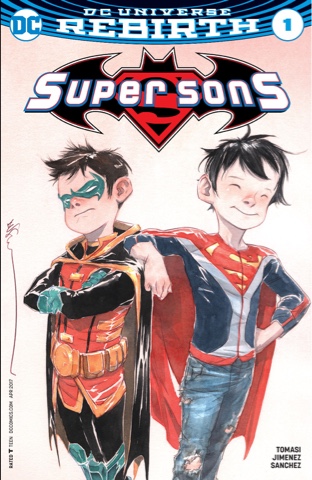 Dustin Nguyen produces a very cute variant cover, though Jon's too off model for it to be perfect. I prefer the regular image by Jimenez and Sanchez, which looks great and promises much.
A joyous blast of kid superhero action, Super Sons made my day.
Alejandro Sanchez DC Rebirth Dustin Nguyen Jorge Jimenez Peter J Tomasi Rob Leigh Super Sons #1 review