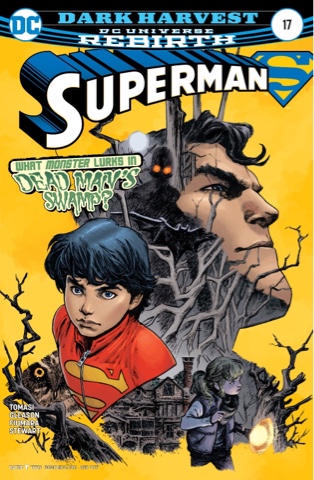 Lois is in the big city and Clark is on a mission, leaving son Jon all alone. He's gorging on ice cream while watching a creature feature. And while he's faced real-life monsters, he's a kid, he can get spooked. 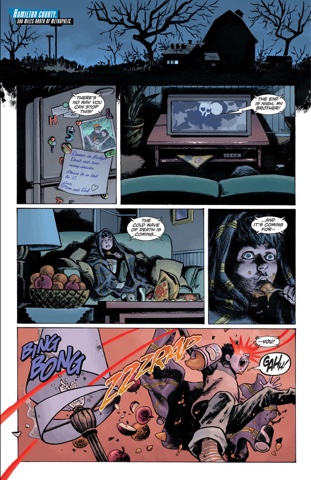 It's neighbour Kathy Branden, who wants helps to find her grandfather, Cobb, who's not come back from his search for wandering cow Bessie. She sounds quite the character... 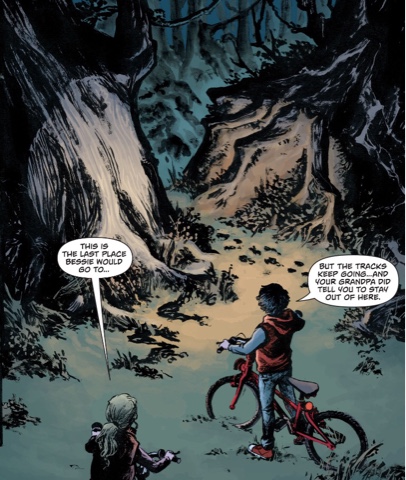 The trail leads to Deadman's Swamp, somewhere Jon's previously visited and he's in no hurry to go back. But Kathy's his friend and if he can help, he will. Soon things get really spooky, with giant critters, a shadowy figure and a house of horrors. 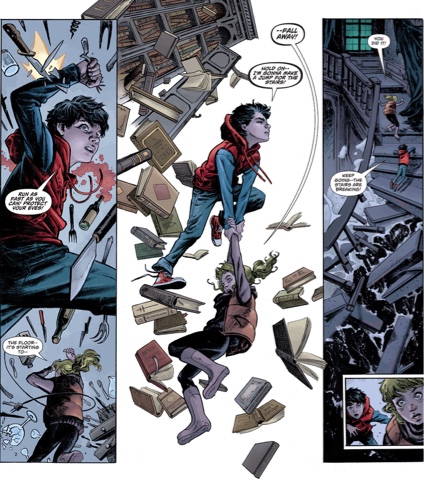 Do they find Cobb? Where would Bessie wander? I won't spoil things as this is a comic everyone should be reading, with its compelling adventures of Jon, Lois and Clark. The mysteries of Hamilton County are enriched by writers Peter J Tomasi and Patrick Gleason, while the developing friendship of Jon and Kathy is rather sweet - let's hope creepy Cobb doesn't sacrifice her to a sacred cow.
Speaking of things bovine, after her starring role on the variant cover of issue #7 it's great to see Bessie steal the show here - maybe she'll team up with Damian Wayne's BatCow in an issue of Super Sons. As for what's going on in the swamp, I don't think it's anything to do with the very tall fellow whom Kathy and Jon see as a giant. My guess is that Old Man Branden and that slimy paediatrician from #7, Doc Brooks, are aliens running a Cadmus Project or Transilvane or something equally Jack Kirby. I hope I'm wrong, though, as that would mean Kathy is an android, or stolen child or worse. They may simply be growing a very pungent weed - the title of this issue, after all, is Dark Harvest.
Blimey, aren't I involved In this storyline? Back to the issue, and the heartening surprise that is guest illustrator Sebastián Fiumara. His terrifically moody art - he's done a fair bit of work for the Hellboy line - is just right for an issue that takes its cue from gothic horror novels. Jon and Kathy are on model, and when they ride their bikes into the night it's a perfect Spielberg moment. Master craftsman Dave Stewart's colours enhance the already fine work. 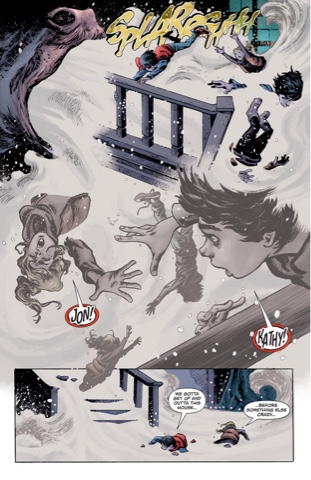 The mounting horrors are precisely placed, while a slight Gene Colan influence I see can't be bad. Fiumara also has a flair for comedy, as seen when Jon reacts to that doorbell, above.
I've no wish for regular artists Patrick Gleason or Doug Mahnke, both favourites and integral to this series' success, to go anywhere, but I hope Fiumara will get more DC assignments. And if that brings a return visit to this series, that's all to the good. 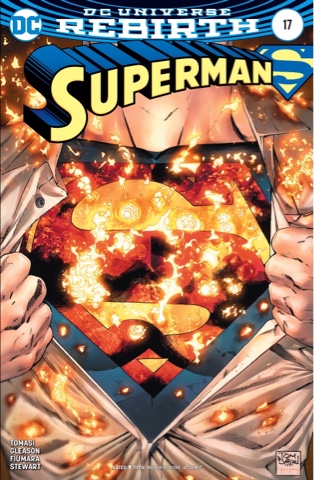 Fiumara and Stewart also handle the cover, and it's lovely, a montage worth of DC's early Seventies dark romances. It's also this month's only appearance by Superman - how great is it that Jon and Kathy, like a mini-Clark and Lois, can carry an issue? Tony S Daniel and Tomeu Morey's burning homage to John Byrne's Man of Steel mini-series is OK, but I can't see any direct or thematic relevance to this issue.
We're about to get into the big crossover revealing the true fate of New 52 Superman and Lois. I hope that when the space dust clears DC Rebirth Lois and Clark will be getting sort-of Aunt Kara around to babysit Jon (and maybe Kathy and Damian), because the poor lad's nerves can't take all this jangling. Me, I'm happy if it means we get issues as special as this.
Dave Stewart DC Rebirth Patrick Gleason Peter J Tomasi Sebastián Fiumara Superman #17 review Tomeu Morey Tony S Daniel