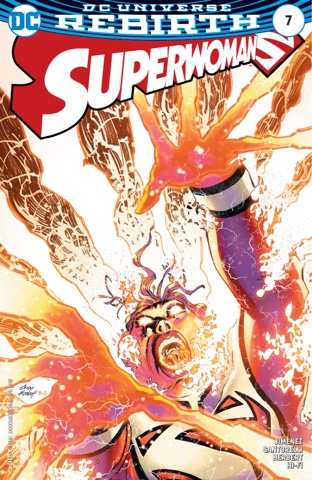 The battle for Metropolis is approaching its climax. Lena Luthor has taken over the city, subjugated its citizens and plans to invade the Phantom Zone. Desperately trying to to stop her are Lana, Ghost Lois, Traci, Natasha, Steel, Lex, Bizaress, Nadidah, Ed, Kryptonite Man, Atomic Skull, Mercy, Maggie Sawyer...
...and that's one of the problems this issue has - too many characters. I love an ensemble cast, but there are just too many people to keep straight, especially with a story as insanely complicated as the one that's built up. 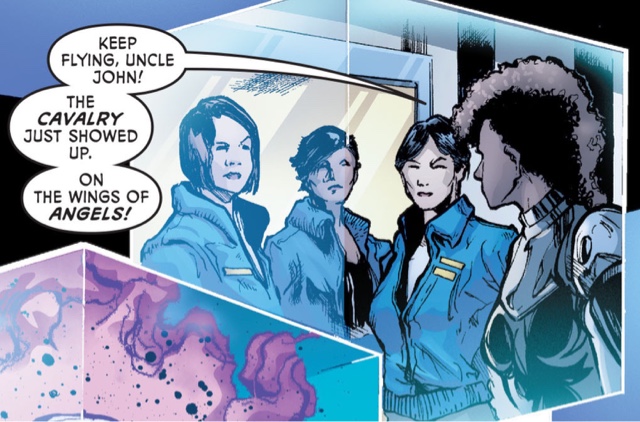 Who are Natasha's 'angels'? And that Savior nutter?... I'm not even going to try to recap the ins and outs of this almost-conclusion to the Who Killed Superwoman? arc. We're jumping around so much that there's nothing that feels like the Big Moment. That's reflected in the art - some pages are laid out by Jimenez and finished by Matt Santorelli, others pencilled and inked by the extremely talented Jack Herbert - in which no single image gets more than a third of a page. It's slick, detailed work but no moment is allowed to breathe.
The other problem is that as the months have worn on, Lana has gone from mildly spiky with partner-in-superheroism Lois Lane to an angry, judgmental person no one would wish to be around. She pushes away the man she professes to love, shows contempt for pretty much everyone else and suddenly hates her hometown.

Yes, she's stressed by the situation, and the fear her powers will kill her. And I appreciate that she's allied with criminals, but it's for the greater good... she might give people a little bit of credit for rallying to her side.
Lana has been one of my favourite Superman Family characters for decades and she's occasionally been bitchy when facing traditional rival Lois. This issue, I don't recognise her; she's suddenly someone whose personality has been shaped by living in a world of misogyny. It's rather out of the blue, meaning her confrontation with Lena - gorgeously drawn by Herbert and coloured by Hi-Fi - doesn't ring true. Lana has stopped being a character and turned into a mouthpiece. 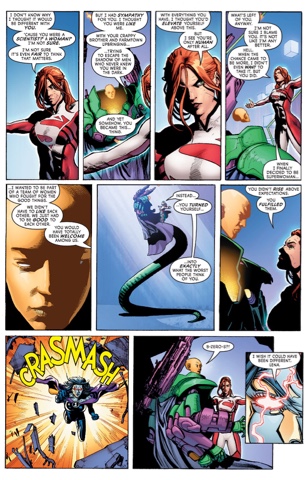 And for the second issue in a row Lex Luthor's intellect is downgraded. 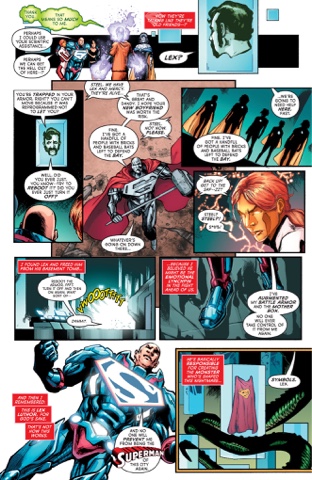 Lex Luthor, designer of power-suits aplenty, didn't think to try a reboot? Last issue we were told Lex's biggest breakthroughs were down to Lena's smarts, and he denied her credit. We've also had a heavy suggestion that Lana is smarter than Steel, an actual genius. But there are ways to present female characters as more than competent without diminishing the guys around them - it doesn't have to be female vs male. In her various incarnations, Lana has always been awesome - but never a genius type. A villainous Lena could have been plugged into this story in some way that didn't stamp on Lex's status as DC's supreme scientist, make him look like a fakir.
Ambitious doesn't begin to describe what writer-artist Phil Jimenez has attempted in this series and I love that he's been trying so hard to give us our money's worth. No other book from the mainstream has such packed pages - but so much space is taken up reintroducing characters and story points that important stuff is benched. Why has Lana such a Mom-Crush on Natasha?

What's up with Lena wanting to invade the Phantom Zone? And I was looking forward to watching Natasha's impromptu team of metal people kicking butt but this is pretty much it.
Jimenez has brought back something of the feel of Nineties Metropolis, when Superman's massive supporting cast were part of the appeal of the various series. The difference is that back then each book - Superman, Adventures of Superman, Action and Superman: The Man of Tomorrow - focused on just a few characters, who took turns in the bigger spotlight. Here, everyone is around all the time. I suspect the Who Killed Superwoman? storyline will be a much better read in trade, when we can zoom through it with character and situation fresh in our minds.
This series got off to a great start, with the dense story rather refreshing. But over the months plot point has been piled upon plot point, with too little elaboration and explanation, that by this issue it's a bit of a mess.
Next issue looks to be wrapping up this initial storyline and an intriguing cliffhanger means I will be back. I'm a big fan of Jimenez and hope he can turn things around - he has the talent, and he certainly wants to do right by the characters. I just hope there are fewer of them.
Hi-Fi Jack Herbert Matt Santorelli Superwoman #7 review; Phil Jimenez