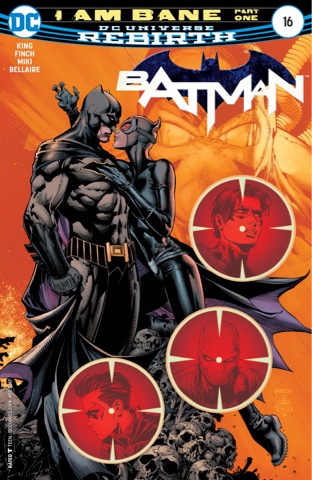 The big action scene this issue sees Bronze Tiger break into Arkham Asylum to see the newly locked-up Psycho Pirate. But he's not meant to be having visitors, so chaos ensues. 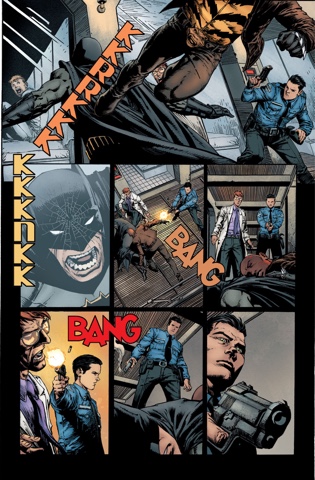 Two people are shot point blank, Batman is kicked in his recently cracked back, but fear not, this is Gotham, everyone's fine. Bronze Tiger is well enough to explain to Batman that he was hoping Psycho Pirate could help with his comedown from a bout of Bane's venom.
Bane, it turns out, is planning a vacation of sorts, a trip to Gotham to revenge himself upon Batman and Catwoman after they stole Psycho Pirate from his Santa Prisca stronghold. So Batman warns those who might wind up in the crossfire - Nightwing, Red Hood, Robin and Duke. 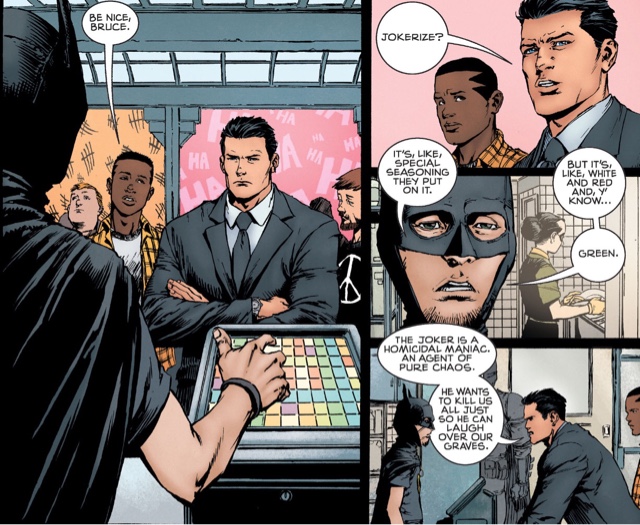 This gathering at BatBurger - writer Tom King's homage to Mark Waid's Planet Krypton eatery, the server's even named after him - is just wonderful. The playfulness between the Robins makes for the warmest, most entertaining sequence in this relaunch to date - this is the We Are Robin book I want. I want to watch Jason Todd's hairline recede, month by month... 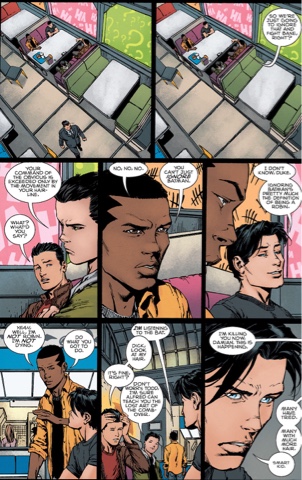 The sequence is a great showcase for the subtler end of David Finch's craft, his pencils and inks distinguishing between Dick, Jason and tiny-Robin Damian with ease, their personalities evident as much in their demeanour as in King's script. He also does a splendid version of Duke, even as his super-cautious nature makes him appear rather fun free; OK, he's not a Robin but as a Bat-sidekick he should still be a laughing daredevil.
John Workman and Jordie Bellaire also bring their skills to the table, Workman's unmistakable lettering complementing the artwork, Bellaire's sensitive hues lifting every scene.
This issue, the first of the I Am Bane arc, also includes a cracking Alfred sequence at Wayne Manor as Bruce bids to have Gotham Girl's Psycho Pirate-induced anxieties erased, and another rooftop encounter with Catwoman. She's shone in the last few issues but I could have done without Selina here, as she's simply being soppy.
There's more canoodling Cat and Bat on the main cover by Finch, inker Danny Miki and Bellaire. I like the gunsight insets but poor old Bane is rather lost under that logo. The Robin-tastic variant by Tim Sale and Brennan Wagner is therefore this fortnight's favourite. 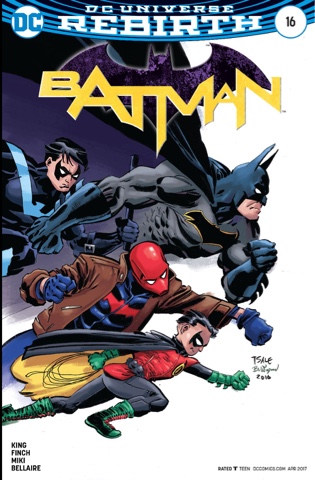 Never mind, this is a strong issue that made me grin like a loon. Unless you're saving your cash for a Riddle-Me-Fish or a Crocque Monsieur, buy it.
Batman #16 review Brennan Wagner Danny Miki David Finch DC Rebirth John Workman Jordie Bellaire Tim Sale Tom King