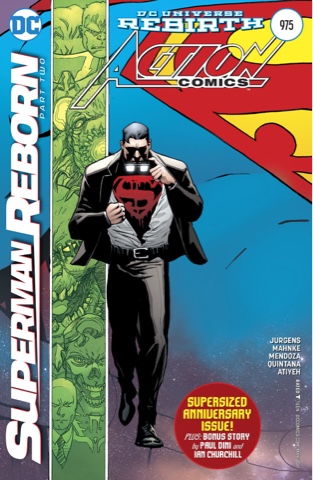 Superman and Lois are on the warpath. Their son, Jon, has been taken away by a strange light and they reckon there's only one suspect - the Clark Kent doppleganger who's been haunting them. Reaching his Metropolis apartment, they find him. And he's angry. 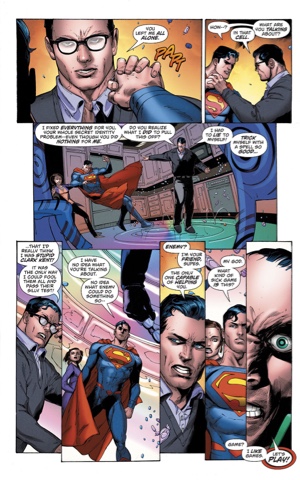 So who is he? Someone who has magical powers, given his reference to a spell. So it's not... 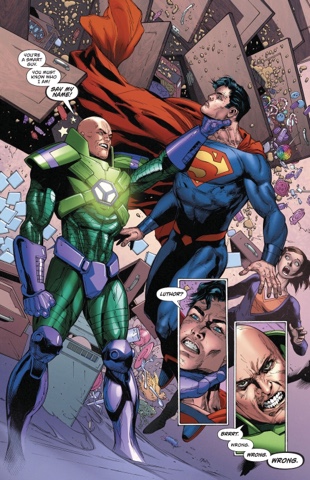 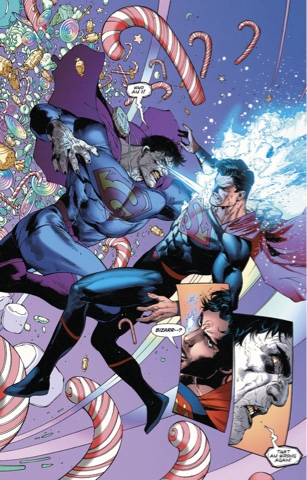 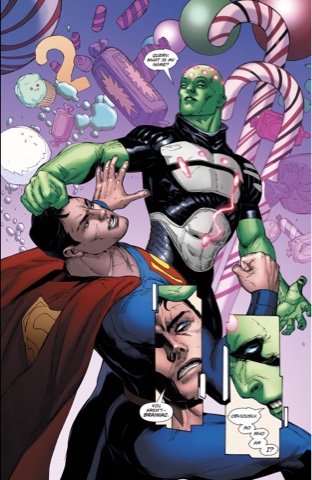 or any of the other villains whose aspect DoppleClark takes on. It is, of course... 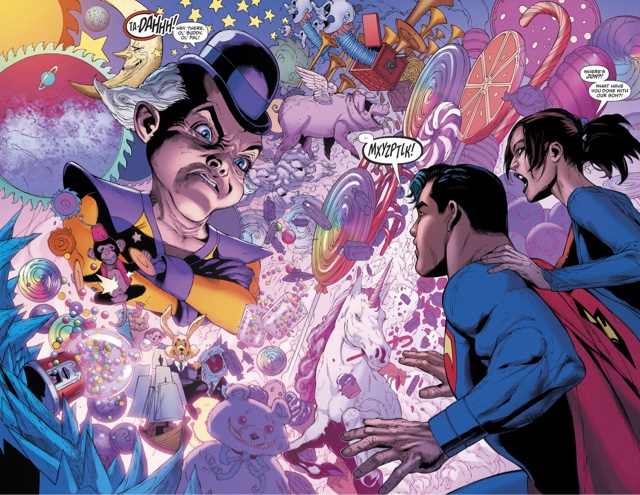 But why does he suddenly hate Superman, why does he want to steal Jon from Lois and Clark's history?
This, we find out in the second story in this double-sized issue, '975' being a well-known reason for celebration. I'm not complaining though, because the answers are really rather compelling, as Mxy tells his tell his tale to the captive Jon. It turns out that the fifth dimensional imp was snatched by the enigmatic Mr Oz (Mister Oz... mysteri-ous?!) and imprisoned. 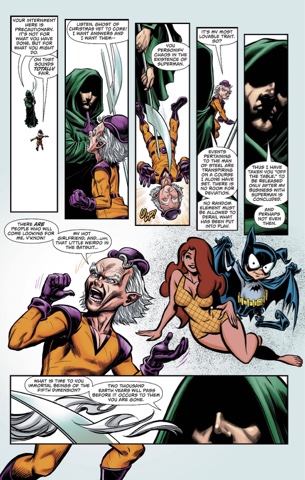 His faith that Superman would eventually notice his absence, and find him, never wavered. Until the day it simply died. That's the day despair became desperation became inspiration and Mister Mxyzptlk freed himself. As for why he turned himself into a non-powered version of Clark Kent, I hope you'll be buying this issue and finding out for yourself.
It's certainly worth the money as two really rather splendid tales progress the short Superman Reborn story flitting between this series and Superman. Regular writer Dan Jurgen teams up with Doug Mahnke, usually to be seen pencilling the Superman series, for the first story, giving us the Mxy reveal. Clark and Lois are on fine form, with Clark helping keep Lois focused and Lois cool-headed enough to keep looking around the apartment for clues as her hubby is pummelled by Mxy's blows and words. They give Mxy a sinister edge, not quite to Whatever Happened to the Man of Tomorrow levels, but this is clearly not someone to mess with right now. 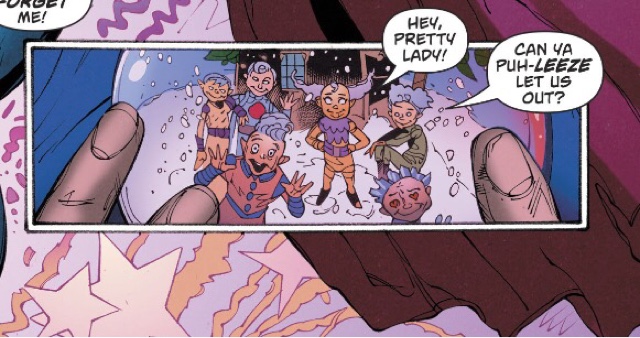 I'm terribly intrigued by the mini-imps in the snow globe. Are they Mxy's version of the Bottle City of Kandor? Or an experiment as, more and more, this Earth seems to be Mr Oz's personal ant farm? (See also Dr Manhattan creating new worlds in Watchmen.)
The villain visual cameos give Mahnke, inker Jaime Mendoza and colourist Wil Quintana a chance to show off, but they're also fitting for an issue acknowledging just how long the Man of Steel and Lois Lane have been around. And it's a terrific way for Jurgens to emphasise Mxy's building anger.
Superman Reborn chapter 2 is a cracking continuation of the story arc, closing on a compellingly quiet cliffhanger.
It's the second story that steals the show though, as animation legend Paul Dini makes a rare foray into printed comics. The overall story demands Mxy be presented as more childlike than is usually the case, but under his pen the character tweak makes sense. Mxy is basically a god and he's been imprisoned, foiled at every turn by a stranger. The foundation of his faith - that Superman is his pal, and he'll come looking for him eventually - is gnawed away until only bitterness is left. Sure, it's hidden for awhile, as he lives the life of Clark Kent, but when it returns... oh boy.
Mxy, existing outside of our normal dimensions, is the perfect character for a spot of meta-narrative and Dini goes for it here. 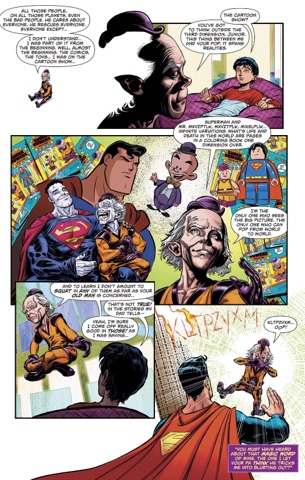 Kudos to illustrator Ian Churchill for getting real emotion into the face of a cartoon imp, and matching the style of his artistic forebears. There's some great work with negative space, something Dini telegraphs early on in Mr Oz's dialogue. 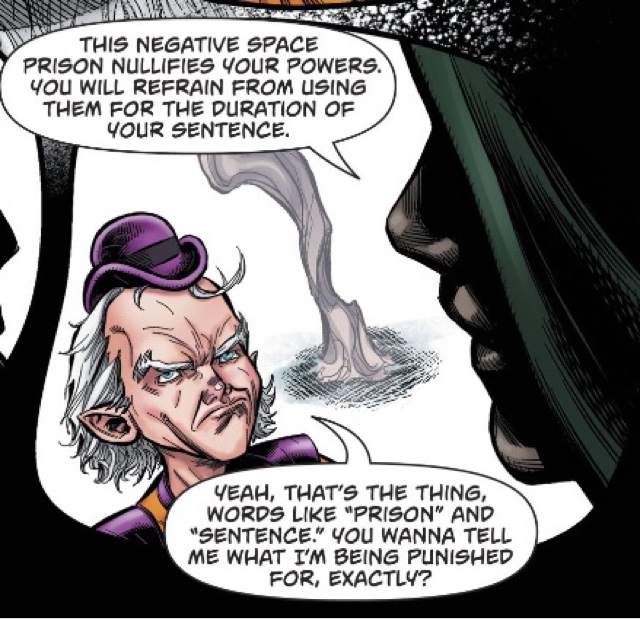 The story does beg a few questions: if Mr Oz is so into controlling this environment, why did he not take an interest in DoppleClark when he saw him on a viewscreen way back in #958?
And if he's been free since before then, why did Mr Oz only learn this from Red Robin in last week's Superman #18?
How can a Superman character who lived through the Mort Weisinger years have so little sense of irony that he doesn't appreciate he's doing to Jon what was so painfully done to him?
Unless answers appear, I'll assume there's some time-twisting nonsense to explain the jailbreak disparity, and Mxy's browbeaten mood stops him having whatever empathy a Fifth Dimensional imp might reasonably be expected to have. As for Mr Oz' failure to investigate DoppleClark, perhaps Mxy's spell literally made him a walking blindspot to him. 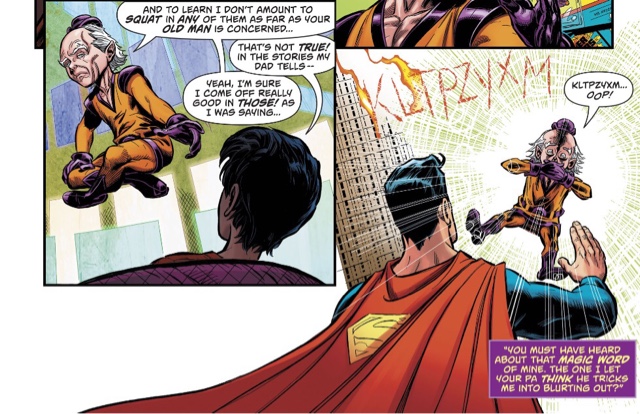 The one thing I'm not delighted with is the assertion that Mxy was only ever letting Superman and friends think they were tricking him into returning home. Now that really is Mxy fooling himself, I've read those stories! Conversely, I love the notion that there's only one Mxyzptlk, crossing continuities since 1944, which fits nicely with that John Byrne story cleverly implying Mxy regularly pops over to the Marvel Universe and manifests as the Impossible Man.
This is a terrific issue, and well done DC on fooling us - I really was convinced DoppleClark was Superman Prime, but this reveal works very well, even explaining why it's been so long since we've seen our favourite imp.
Penciller Patrick Gleason and colourist John Kalisz produce a main cover image that complements Superman #18's nicely, while Gary Frank and Brad Anderson offer a gorgeous villains showcase which could only be improved by Superman being in the classic costume.
If Mxy would like to bring me next week's comics right now, I promise to rescue him should he ever need it.
Action Comics #975 review Dan Doug Mahnke Gary Frank Brad Anderson Ian Churchill Jaime Mendoza John Kalisz Patrick Gleason Paul Dini