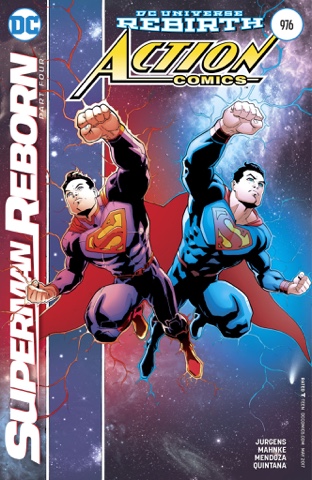 Ever read a comic that goes exactly where you expect it to... and you couldn't be happier? That's me and Action Comics #576, which wraps up the Superman Reborn story arc and along with it, the short, rollercoaster lives of the New 52 Superman and Lois Lane.
But they're not gone - the Lois and Clark who supplanted the ones we knew in 2011 are back, summoned to Mr Mxyzptlk's cosmic games room by new Superboy Jon Kent just as the versions he knows - his parents - fade away. And they're confused.

Mxy, though, is happy, as he plans to take Jon away to be his eternal playmate; after all, this Lois and Clark don't know him, they've no reason to care.
Oh Mxy, it's like you've never met them. They may not be the Lois and Clark Jon knows, but that doesn't mean they'll let you steal a kid. And when the shades of parents past appear on the scene, Jon gains the power to defend himself. 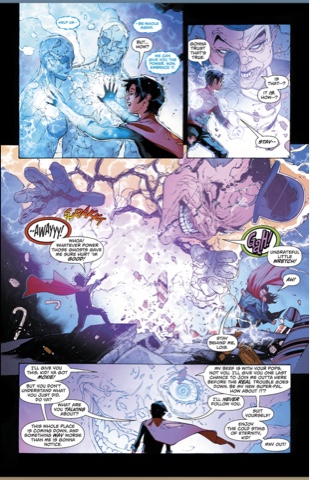 Mxy gives up. He figures that fighting of this order is bound to get the attention of someone more powerful even than him. Who? 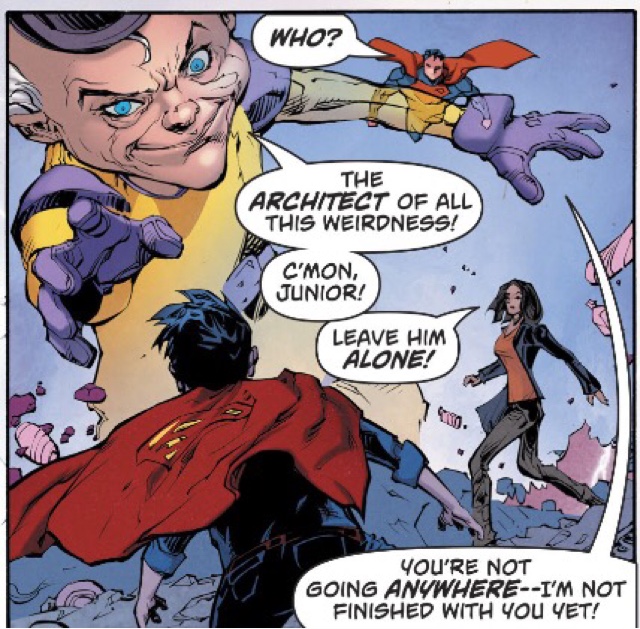 Mxy retreats, and Lois, Clark and Jon have a chance to really talk. Jon's story is crazy, but they've lived crazy. The facts can't be checked but Lois does have an unerring test of truth - her reporter's instinct. 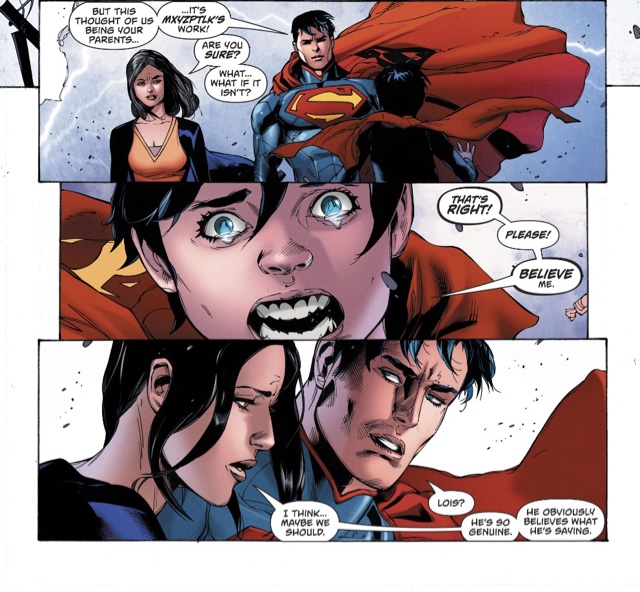 There follows a merging, a rebirth. Lois and Clark are back and their returned truth has consequences for the whole universe, as explained by the mysterious Mr Oz 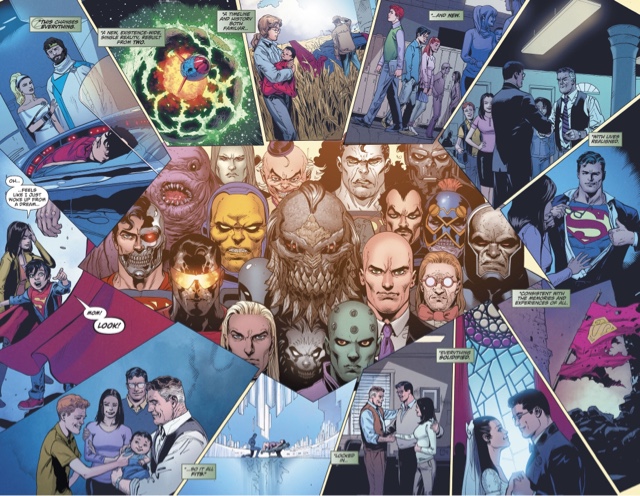 A few details aside, the separate lives of the New 52 Clark and Lois are forgotten, the history of Superman and Lois is the history of the pre-Flashpoint versions, with the addition of the years after Jon's birth. This latter point is smart, as it allows the Hamilton County storyline to continue. Presumably, Lois and Clark and Jon live in Metropolis during the week but have a place out in the sticks; we'll find out soon.
For now, I'm just delighted that we have the loving Kents underlined as the true first family of the DC Universe, without the New 52 Lois and Clark being entirely rubbished; they were part of the originals, but split off by whoever manipulated reality. It seems clear from last year's DC Rebirth special that Love being deleted from the DC Universe equation was part of an experiment. Well, Jon just brought it back, and who knows, the 'architect' may not be displeased; scientists sometimes just want knowledge, not a particular result.
So who is the cosmic tinkerer? This image accompanying Mr Oz's musings seems to give rather a large clue. 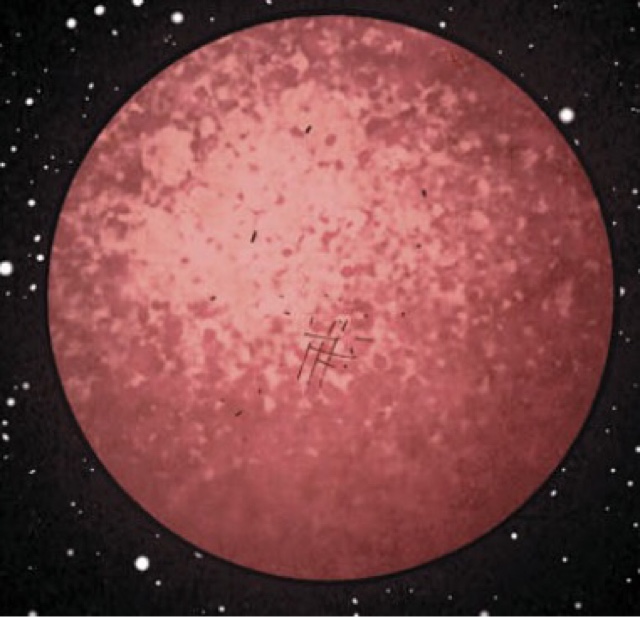 A red planet? That has to be Mars, last known whereabouts of Watchmen's Dr Manhattan. But zoom in, and look at what seems to be a pictogram, pointed out to me by Twitter chum @zoraida_merlo. Anyone recognise it?
Writer Dan Jurgens hits the story ball right out of the park. As I said up top, this closing chapter went where pretty much everyone I've talked to expected it to, but reaching the destination and providing a magical mystery tour are two different things. The characterisation of Lois, Clark and Jon; the surprising deviltry of Mxy; the clues of Mr Oz; the scene in which New 52 Lois and Clark allow the walk-ins... it's a stylishly told tale. Jurgens has been getting plenty of praise since DC Rebirth began, but he's still not getting enough, he really knows how the DCU should feel. I've said it previously but just in case Dr Manhattan needs a new project - should Jurgens ever retire from writing and drawing, he'd make one heckuva DC editor-in-chief.
As for penciller Doug Mahnke, his work is equally exemplary - he finds a note where the epic meets the personal, nailing every emotion from Lois's concern for a lost boy to Mxy's Loki-like tantrums. The depictions of Mxy going large are especially great but my favourite visual moment is Mr, Mrs and Master Superman reunited in a gorgeous splash I'll not spoil here. Jaime Mendoza, Christian Alamy and Trevor Scott split the inking honours and while I can see the different finishes, it's no huge deal, especially with the unifying colours of the ever-excellent Wil Quintana. And the letters of Rob Leigh remain a welcome visual unifier. Patrick Gleason and colour artist John Kalisz are behind the terrific main cover, while Gary Frank and Brad Anderson give us a glorious variant. A tip of the hat, too, to the Superman creative team of Peter J Tomasi and Gleason, and editors Mike Cotton, Paul Kaminski and Eddie Berganza for delivering this smoothly into my hands 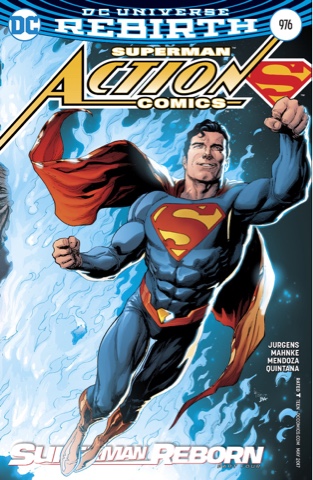 So there we have it, the Saga of the New 52 Superman is over. The Superman and Lois everyone likes, the post-Crisis Kents, have gone through a kind of cosmic coronation, crowned the optimum versions. The New 52 versions, who weren't so much terrible characters as puppets at the mercy of Dr Manhattan/editorial mandate, are seen to have mattered - they were the real thing, just not the whole deal. Jon is here to stay and who knows, if previous continuity is back in play we may even see Ma Kent again.
Heck, throw in Pa Kent too, we'll call it a blip.
As for Dr Manhattan, that's a thread that's going to continue through DC books awhile yet, and I'm OK with that, I'm enjoying the mysteries of the slow build.
So what did you think?
Action Comics #976 review Brad Anderson Christian Alamy Dan Jurgens Doug Mahnke Gary Frank Jaime Mendoza Patrick Gleason Peter J Tomasi Rob Leigh Trevor Scott Wil Quintana