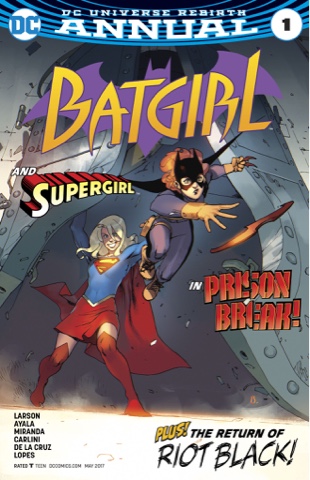 Everything old is new again as Batgirl and Supergirl meet for the first time. The occasion is a visit to Project Cadmus, to find a psychic who's pleading with Kara for help. 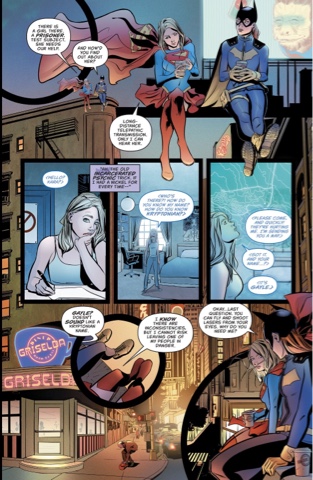 I like that Babs is as cynical as me about the obviousness of the trap Kara is being dragged into. Actually, 'cynical' is the wrong word; her wariness is sensible, based on experience and common sense.
Longtime fans will have nodded when the psychic's name came up - Gayle has to be Psi, a foe dating to Paul Kupperberg's Daring New Adventures of Supergirl series back in the Eighties. She also showed up up Sterling Gates' digital first Adventures of Supergirl series, a must for all Kara fans.
Before we get confirmation or denial, Babs and Kara have to break into Cadmus, the nefarious super-science project created by Jack Kirby and repurposed for the Supergirl TV series. We're firmly on telly territory here, with the project a veritable evil factory, apparently imprisoning young superbeings. One of them has the ice powers that are ten-a-penny in the DC Universe, but Inaki Miranda's illustrations and Eva De La Cruz's colours make him stand out. You'll notice that Babs slips at the end of the page, but fear not, Kara catches her. Batgirl and Supergirl make a great team from the off, even if Babs thinks Kara's a tad cocky. That's 'thinks' as in 'thought balloon'. 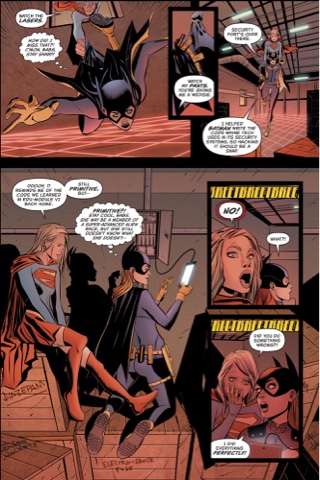 Writer Hope Larson embraces one of comics' classic tools to add texture to the meeting of the distaff World's Finest, a nice surprise in an all-out enjoyable tale. The encounter ends with Supergirl and Batgirl kicking back, with Kara knowing she likely has a trip to the Phantom Zone in her near future. 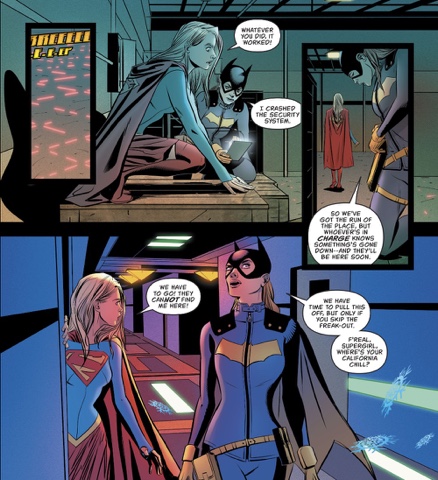 I can understand the trepidation around the Zone but Kara is a little too nervous this issue, constantly worried about being caught by Cadmus when she should be planning how to take the entire operation down. It's the only off-note in Larson's script, but she may be operating according to a memo from the Supergirl office. I'm already looking forward to the next teaming of Babs and Kara.
Thinking on, there is something else in here that doesn't sit well with me. 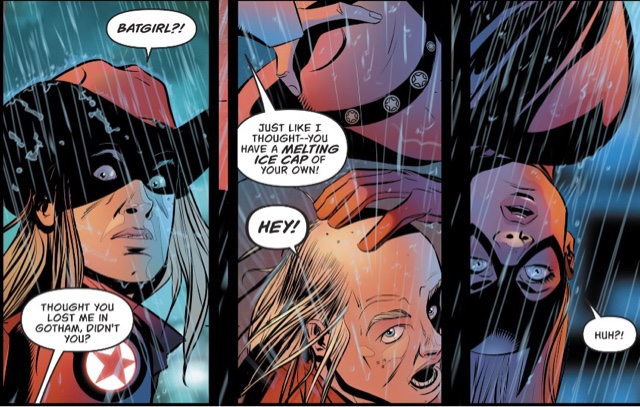 Bald shaming! I thought you were better than that, Supergirl.
Every page is a visual delight, with Miranda having fun with the layouts, right down to a cute inset panel of our heroines leaving the page. 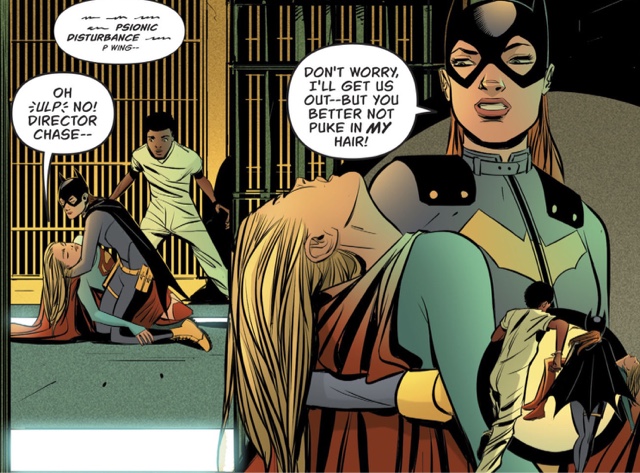 Miranda's action scenes work, the facial expressions complement the script... even Babs and Kara standing on the roof, in the Metropolis rain, looks amazing. Oh, and I suspect he's a bottom man. 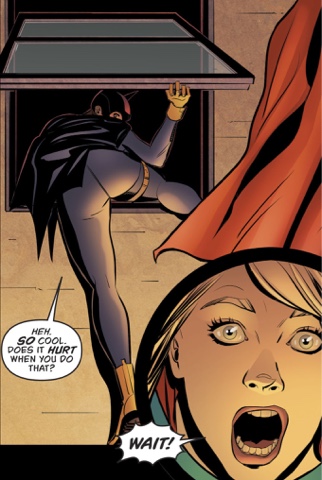 Miranda doesn't stint on the detail, from a guy in the street picking up the discarded cowboy hat of minor villain Red Spur (no, me neither) to the deep focus street view in the same panel. De La Cruz's brighter choices make Metropolis pop, while sickly yellows help Cadmus look appropriately grim.
I just wish Larson, Miranda and co were producing the entire issue but this double-sized annual is a two-story deal. As the cover proclaims, it features 'the return of Riot Black'. The fact I'm writing this without having read it yet tells you how excited I am about this Batgirl of Burnside loser. Give me ten minutes...
Well, that was better than expected. Cyber criminal Riot Black remains annoying and less than a credible threat to Batgirl, but he's more maguffin than featured player. This story is about Babs' friendship with former flatmate Alysia, whom she's been neglecting due to other interests. 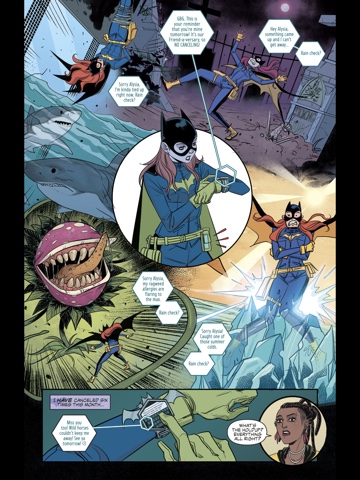 I love that Audrey 2, and Batgirl's animated-style eyes in the centre of the page. DC talent workshop writing graduate Vita Ayala produces a well-paced 'night in the life' piece showing us that, yes, Babs is a bit crap at nurturing friendships. The story is set awhile back, when Babs' other big pal, Frankie, was settling in as Oracle substitute Operator, and she's in here too, the hugely likeable, hi-tech Jiminy Cricket in Babs' head.
When an urgent lead on Riot Black arises while she's out for a 'friend-a-versary' (ugh) night with Alysia, Babs feels she can't fob her off any more and lets her tag along, rather impeding her crimefighting activities. More seriously, she's letting an untrained civilian with no idea what Babs' 'meeting with her academic advisor' is really about walk into danger. 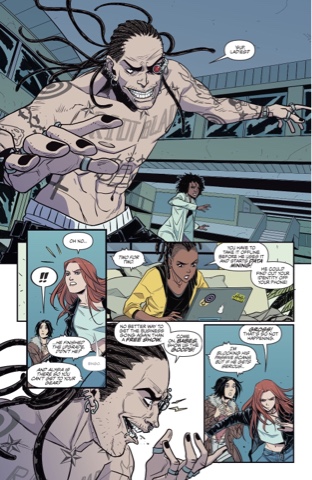 It all ends happily, but Babs needs to have a serious talk with herself. Despite still calling Babs 'GBG' (Gordon, Barbara Gordon), being a tad pushy and at one point exclaiming the annoyingly twee 'OMG GBG!', Alysia deserves better than this.
My other problem with the story is that Ayala doesn't give Riot Black a decent introduction... we get bits and pieces but a bit of background early on would've helped hugely - I read his original appearances and I couldn't recall he's a data blackmailer, so new readers are at a real disadvantage. Hopefully this is the last we'll see of the cocky creep.
Otherwise, Ayala does a fine job with Burnside Babs, overcommitted crimefighter. I look forward to more from her.
Eleonora Carlini provides a pitch perfect Batgirl of Burnside, her open, vibrant illustrations with the colours of Mat Lopes recalling the hipster stylings of Babs Tarr. As well as the montage above, great moments include Babs tumbling from a roof into the street... 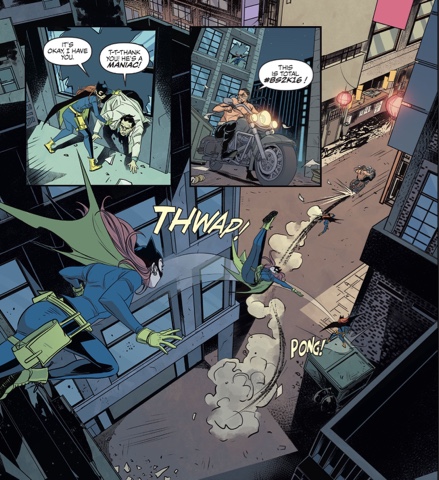 ... and the interrupted evening... that's a nice variety of angles and some lovely facial expressions. 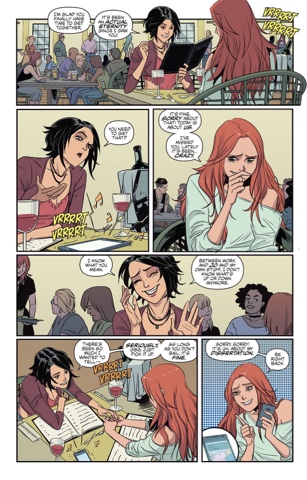 I also like the Jamie Hewlett-style applied to Riot Black.
In all, this is a more than decent flashback tale, even if I'd prefer something that felt a little more special for the annual - more Kara and Babs would have fit the bill nicely.
The cover is by regular Supergirl interpreter Bengal, and it's a pleasant piece, marred by too much clutter... that Riot Black puff could go, for a start.
Overall, Batgirl Annual #1 is a pretty good comic - not a knockout, but worth your time and money.
Batgirl Annual #1 Bengal Eleonora Carlini Eva De La Cruz Hope Larson Inaki Miranda Mat Lopes Supergirl Vita Ayala