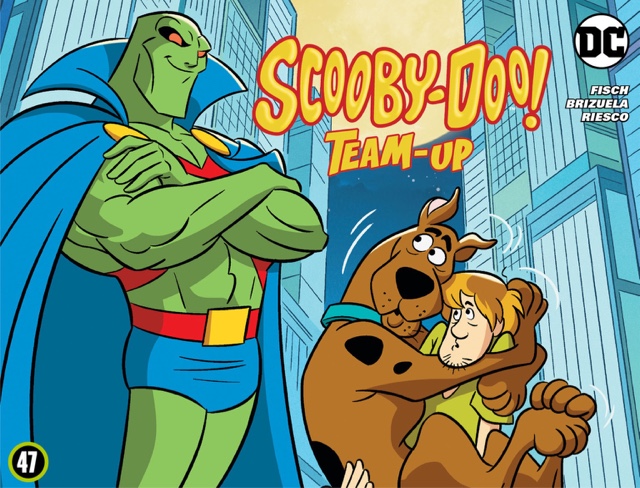 It's just another day for the Mystery Incorporated members, solving crimes and taking names. One of them, rather forcibly.

Turns out, it's not Shaggy but this issue's very special guest star.
J'onn wants the help of Daphne, Fred, Velma, Shaggy and Scooby because someone is impersonating him in order to turn the people of Earth against aliens. A lot of strange visitors have already been taken in by the authorities, but a few are holed up with J'onn. This leads to the funniest comic book exchange of the year so far. 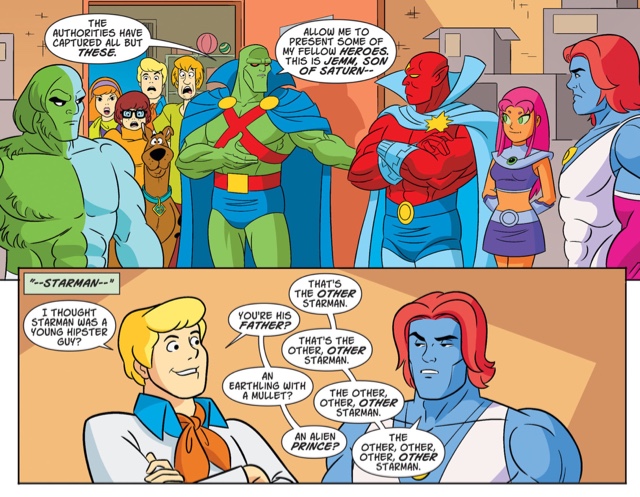 Also in the mix in this first of two digital parts are a rather natty pair of government agents. 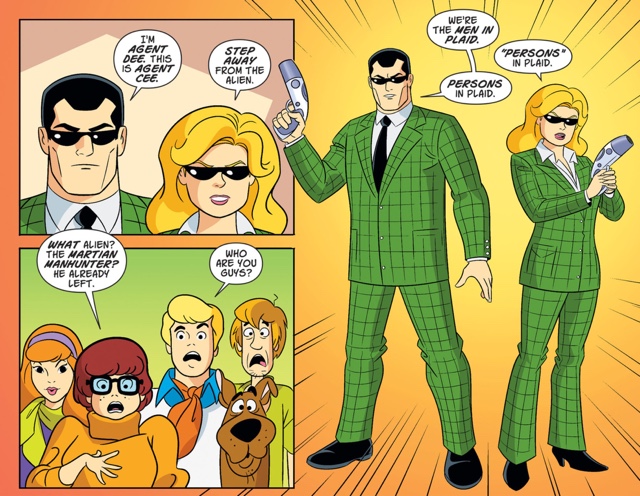 I don't believe 'em for a minute. Velma thinks she spots a clue when the fake Martian Manhunter reappears on TV.

Hmm... he's wearing something around his neck. It could be a speaker of some kind, and the jagged word balloon certainly matches those of my suspect.  Could the self-declared invader from Mars really be...

... a hypocritical world-conquering worm from Venus, Mr Mind from the Captain Marvel legend, who once had a run-in with the gang? We'll find out soon, as massively talented writer Sholly Fisch and artist Dario Brizuela bring us the conclusion, which I don't doubt will be great. Hopefully we'll see J'onn stop hiding - that's far too Supergirl TV series - and use the skills of his other self, police detective John Jones, to help solve the riddle and lead the alien heroes into battle.
Whatever the case, I'm just delighted to see J'onn in classic mode rather than any of the more 'alien" versions we've suffered in the last couple of decades. This is my guy, the big green fighting machine who looks like your dad. Brizuela draws him, and the other guests, with evident glee, while Scooby and co are as adorable as even. The vibrant colours of Franco Riesco and breezy letters of Saida Temofonte add to the fun, while editor Kristy Quinn also deserves credit for overseeing another splendid issue of one of DC's hidden gems.
This is another joyous issue, don't miss out on the fun. Just don't remind me when the bad guy turns out not to be Mr Mind, but Mister Mzyzptlk.
Dario Brizuela DC Digital Scooby-Doo Team-Up #47 review Franco Riesco J'onn J'onzz Kristy Quinn Martian Manhunter Saida Temofonte Sholly Fisch