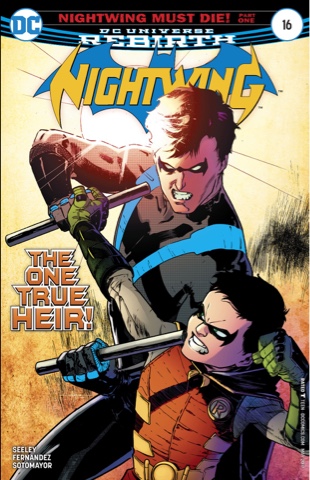 Here's a book that promises something fun and gives us so much more. The cover tells us it's Damian Vs Dick for the Bat-Crown. It's a bit of a non-issue because Dick and Damian are a generation apart so there's no reason they can't both wear the pointy ears at some point. Heck, Dick already spent time as Batman when Bruce was thought dead and Damian was his Robin. They made a great team.
Which is why I don't care what the excuse is, I just like having them interact. And that they do as Damian heads for Blüdhaven after reading the DCU version of Twitter. 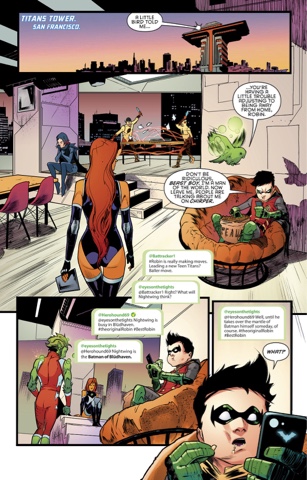 Daft lad.
Dick, meanwhile, has been spending time with his rather smutty new lady love, Shawn. 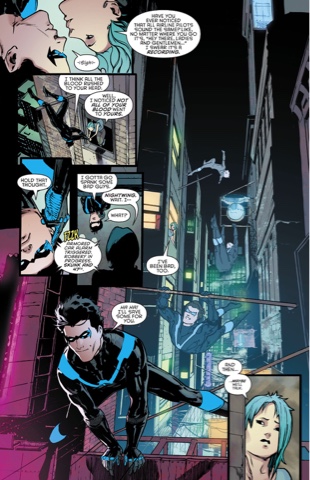 Tut! I'll be corrupted at this rate. Anyhoo, Damian shows up and tries to pick a fight, but Dick isn't having it, having earlier had this phone call.

Oh dear, someone needs to restock his utility belt.
As for what happens next, you either know, or really ought to find out for yourself. Suffice to say that a bad guy returns whom I really never expected to see again.
This is a return to form for this series after the teensy-bit-tedious storyline involving a bunch of trying-to-reform villains. That suffered from them being an unmemorable bunch - you'll notice I've not been able to recall their collective name, the Shut-Ins or Hold-Outs or Also-Rans or something - and the overall bad guy very obvious. This issue, despite the presence of professional scene stealer Damian, the spotlight is firmly back on Dick - and he loves it! 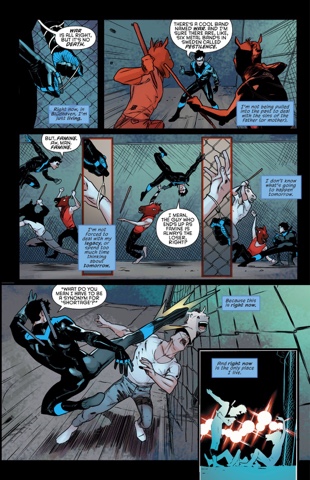 I have to admit, I was rather hoping Shawn had been tragically fridged at the end of last issue - she was one of the unmemorable villains and I couldn't for a second see why Dick doesn't just try actually dating Babs (see also Babs and anyone she dates who isn't Dick). They've always been 'what a shame, it's the wrong time' but they were both between engagements recently. If Shawn has something over Babs it has to be a bigger sexual connection with Dick, because lord knows, he and Babs click emotionally. It can't be the ridiculous blue rinse.
Still, here she is, possibly pregnant and definitely kidnapped. It's Dick to the rescue, accompanied by Damian, who makes a convincing case to be allowed to play with the grown-ups 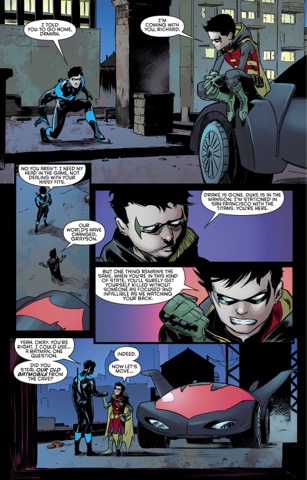 Tim Seeley's Damian is as good as his Dick, immediately recognisable as his best self, the one written by Grant Morrison and Peter J Tomasi. He's narcissistic, pompous, arrogant and occasionally kinda sweet. Plus, he brings that car everyone digs.
One thing though, is this the first time we've seen the world at large knowing Dick used to be Robin? I thought that was kept a secret due to concerns about revealing Bruce's secret ID that I never really got.
Javier Fernandez comes to Blüdhaven for the first time and is right at home on the slightly seedy streets (that's meant to be a compliment!). From the Spidey-like vertiginous snog at the start to the final reveal, the city has real personality, with the colours of Marvel's urban expert Chris Sotomayor a big part of that. As for the acrobatics so vital to a good Nightwing story, Fernandez brings it. He also draws a great Teen Titans, it's been aeons since I've seen a Kid Flash Vs Kid Flash table tennis match.
My favourite thing, though, is the look on Dick's face as he gets that phone call. Let's see that one more time.

I love the mix of sheepishness and terror, and how Sotomayor's graduated tints add to the growing emotion. 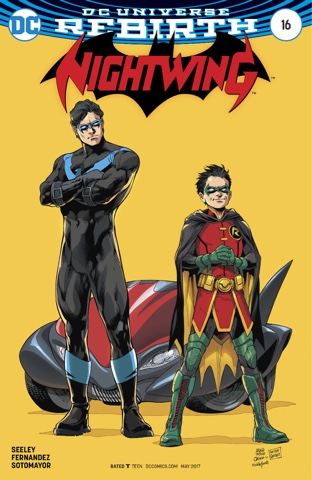 Add in a wonderful variant homage to a Frank Quitely classic by penciller Ivan Reis, inker Oclair Albert and colourist Sula Moon and a gloriously intense main image by Fernandez and Sotomayor and we have the best-looking, most entertaining Nightwing in months. And it's not like this comic is ever bad!
Chris Sotomayor Ivan Reis Javier Fernandez Nightwing #16 review Oclair Albert Sula Moon Tim Seeley