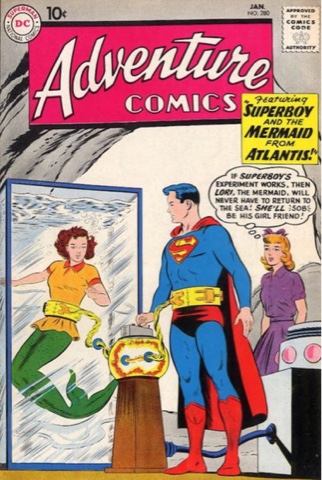 One of the fun aspects of Silver Age Superboy was his habit of meeting heroes and heroines we'd already seen him encounter for the very first time as an adult. Batman, Green Arrow, Lois Lane, Supergirl and, in Adventure Comics #280, less than two years after her debut in Superman #129, Lori Lemaris. 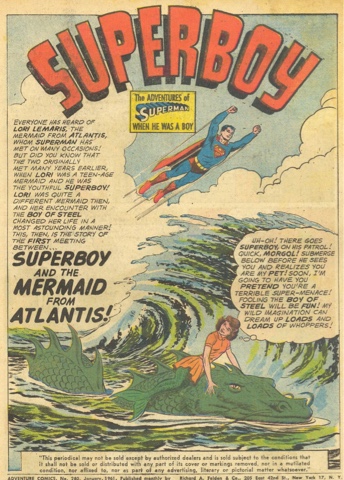 Reading this splash page, it's impossible not to anticipate some jiggery pokery with memory by the end of the story. But what happens before that?
The story opens with Superboy helping the owner of the Smallville Aquarium by supplying him with new, swankier exhibits. I bet even a few kids reading in these so-called simpler times considered Superboy's attitude to sea life a tad callous. 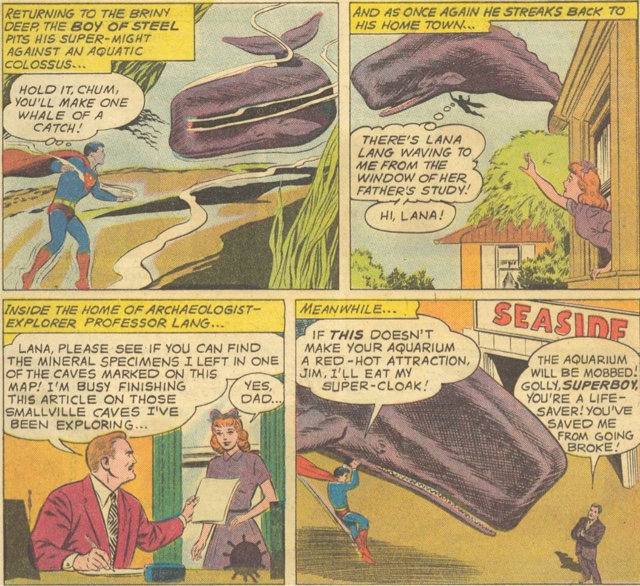 Elsewhere, the Boy of Steel is making sea-life swoon.

It's teen Lori, telepathically fibbing to a pal... and Mer-Mom and Deep-Sea Dad are not pleased.

They just don't understand her! Time for a swim to clear her head. 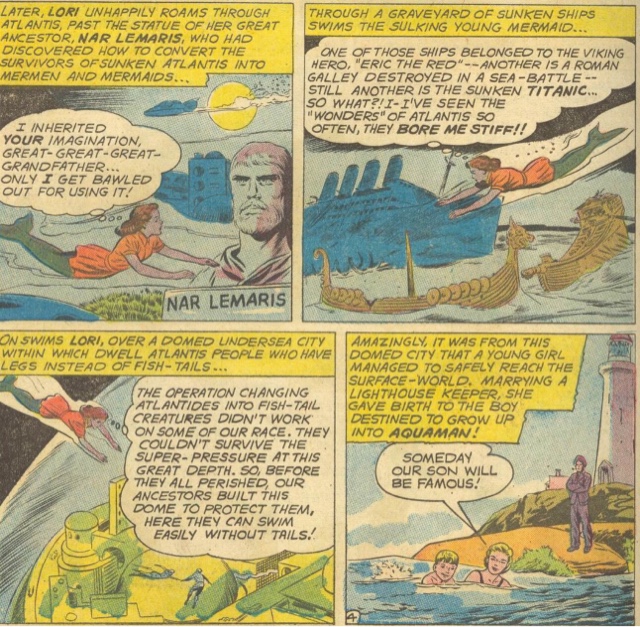 So Lori, and probably Superman, are a fair few years older than Aquaman, spawn of those wimpy Poseidonis people who just can't take the pressure. Who knew? 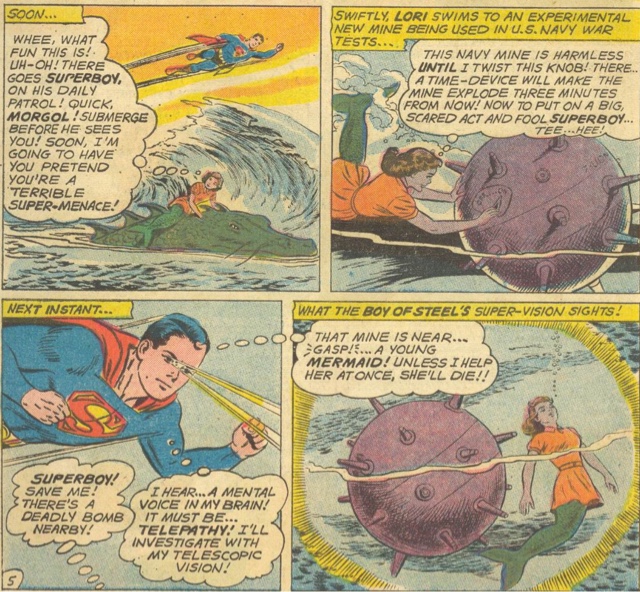 What's a mer-girl to do but run away, engineer an encounter with Superboy, fib through her gills and persuade him to use his super-brain to make her an air-breather. That'll show 'em. And if it it messes up her mobility, well, she can always model some very pretty blankets.

That clever mind, though, means Superboy sees through her claims to be a lot older than the average Aquaboy. 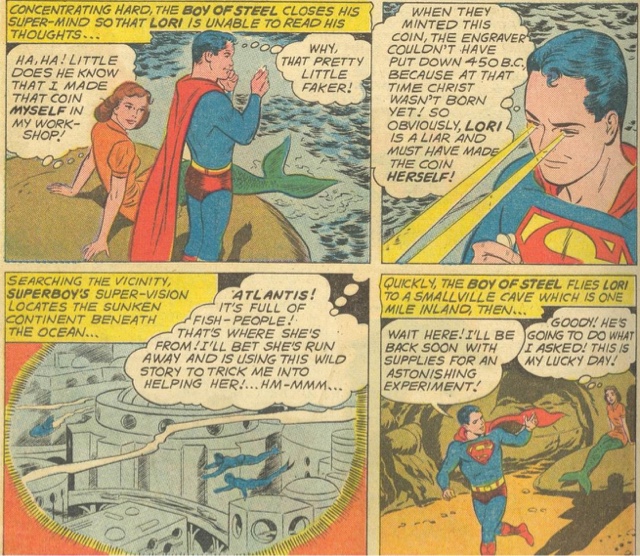 I like that BC business, it's the kind of mistake a kid might make (let's just assume that for some reason the people of Tritonis follow surface world era-naming systems).
Despite realising Lori is a bit fishy, Superboy looks set to grant her wish. Enter Lana Lang.

Two females in a Superboy story and neither of them being Ma Kent means only one thing - rivalry. 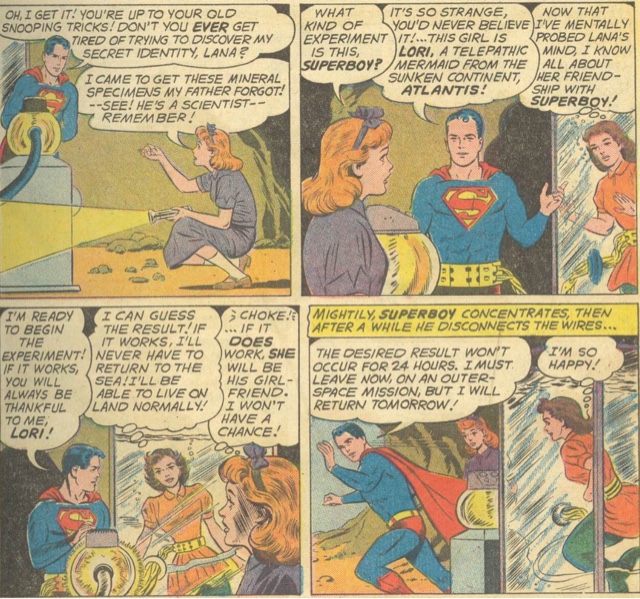 Was there ever a bigger indictment of another girl than 'mushy'? But as it turns out, Lana shows she can rise about her schoolgirl jealousy. 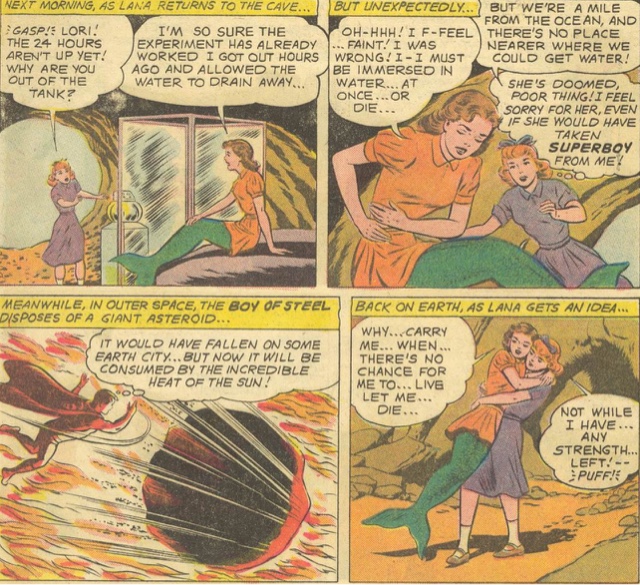 And when Superboy shows up after his spot of comet-busting, he reveals his true plan.

Let's run that by you again. 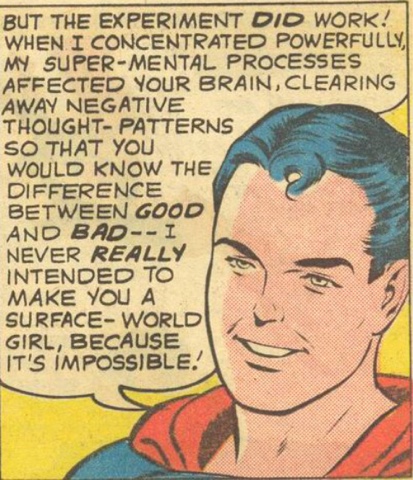 Did he just admit to rewriting Lori's personality? I fear he did. Lori seems happy about the more mature her, but it's not like she has a choice in the matter.
And this isn't the end of the mind meddling in this fun first encounter. Remember Lori's overprotective dad? 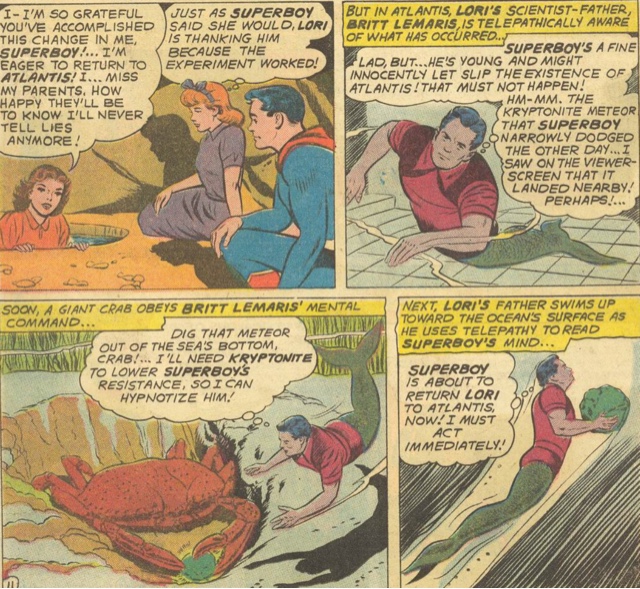 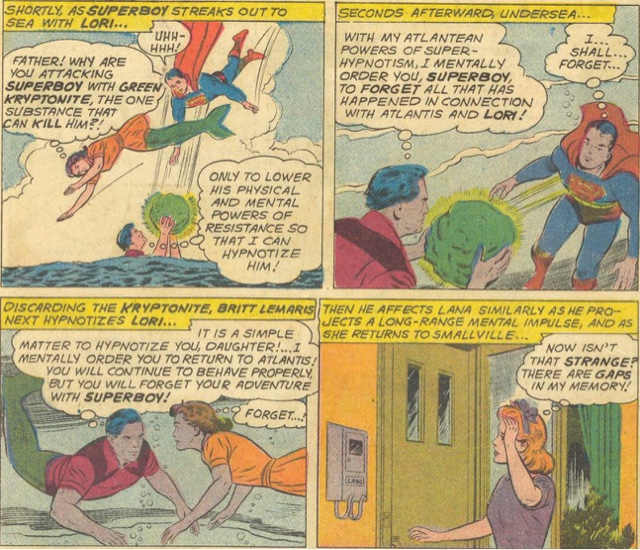 He endangers Superboy with green kryptonite. Mindwipes him. Mindwipes Lori. Mindwipes Lana ... long distance! This super-hypnotist could give Universo a run for his money.
I expect this was just a fun romp for the little kids at whom Adventure Comics was aimed in the Silver Age, but from an adult perspective in the 21st century it's all rather dodgy. OK, it's not quite so bad as the Bronze Age tale in which the Robot Teacher from Krypton basically had Superboy 'become a man' by sleeping with a young woman he'd hypnotised into believing she was someone else. But who's Superboy to judge Lori, decide she needs to be taught the difference between 'good' and 'bad'? She was a daft kid, like most of us at some point, she'd have grown out of it naturally! And - bonus - he creates the perfect woman for him to fall in love with as an adult. Apparently Lana, who was forever being taught 'lessons' by Superboy, was lucky to get through her teenage years without a super-lobotomy?
And Lori's parents are positively sinister in the story's final panel. 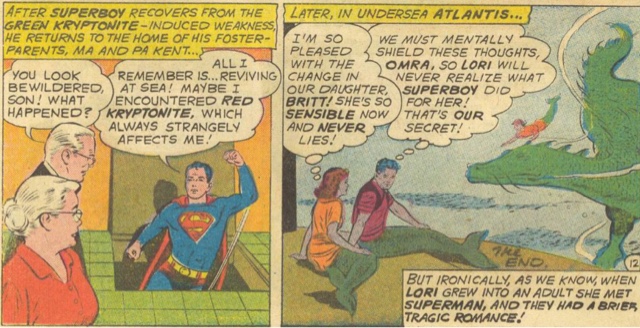 I can't, though, deny the craft of writer Jerry Siegel, who wrote a typically twisty turny tale with impeccable internal logic. Of course the solution to problem of a wayward mermaid is to rewrite her personality... decades of these types of moves led to the highly entertaining Superdickery website.
As for the art, it's truly scrumptious, John Forte inks Curt Swan and these kids have rarely looked better - that panel of Superboy explaining all, for example, is amazing. Forte is a favourite of mine but his solo work, pencilling and inking, has an undeniable stiffness; perfect for his Bizarro World stint, not always so apt for the Legion of Super-Heroes. The storytelling, as always with Swan, is spot on, the emotions impossible to mistake. I wish we'd seen a lot more of this artistic teaming. The unknown colourist is also on top form - check out what they do with orange and white in the comet panel.
And I wouldn't be at all surprised to hear the likes of Pop Artist Roy Lichtenstein saw this panel. 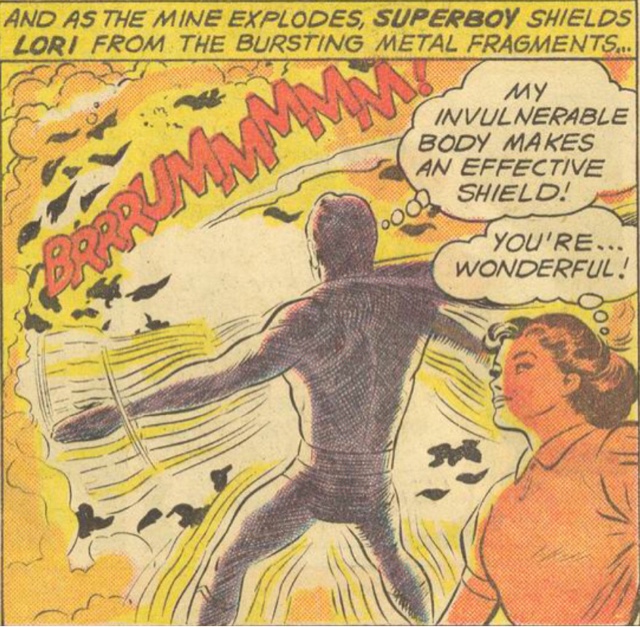 Reprinted in 2010's Superboy: The Greatest Team-Up Stories Ever Told, Superboy and the Mermaid From Atlantis is an entertaining curio. I wonder if Superboy and Lori ever met for the first time as babies?
Curt Swan Jerry Siegel John Forte Lana Lang Lori Lemaris Retro Review - Adventure Comics #280 (1961) Superboy