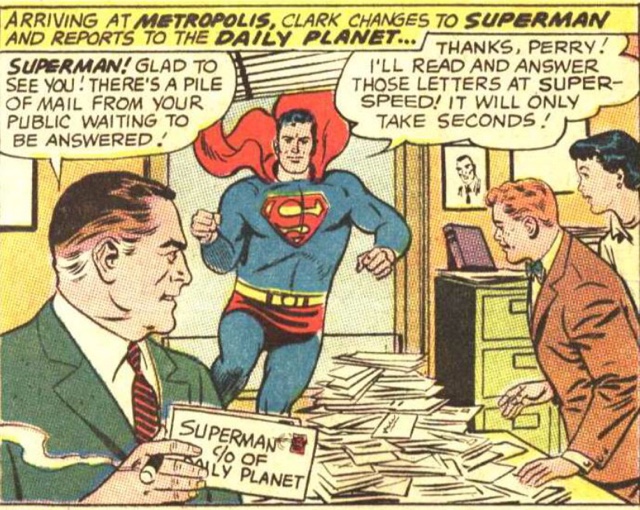 Because sometimes Blogger gets stuck and I can't get to the comments on a post...
Rob S wrote: Another terrific issue, and a great review, Mart. Do you have any idea who it is with their head on fire next to Robin in the panels with Oz's cells? Is that Prophecy? I've already forgotten his character design.
Anyway, Oz. We know or suspect he's got the following people in his cells -- is there anyone I'm missing?DoomsdayTim DrakeProphecyDoppelClark (suspected to be Superboy Prime)and possibly Ray Palmer (although this hasn't been confirmed, I don't think)Anyone I'm missing? I've no clue what they all have in common, if they're being jailed for a common reason.
Hmm, it never crossed my mind that he might have Ray. So what could they have in common? Doomsday is sheer power. Tim is a master detective. Prophecy has multiversal knowledge. DoppelClark is a multiversal survivor and madman. Atom... Time Pool knowledge? It's a mystery!
**********************************
Peter LoCasto wrote: The only reason Oz would've possibly had Prime in a cell would be to just keep him away from everyone else, but I don't think he's the one who escaped. Oz has been aware of DoppelClark right? And there's no way in Hell Prime would ever scrawl messages about Superman saving him. He HATES Clark.
There is that! But he's also barking mad, I could see him slipping in and out of personas.
**********************************
Giffenfan wrote: Can't be Prime. DC over the last 24 hours or so released an ad with about a half-dozen characters - New52 Supes, Bizarro, Mxy, Magog - and a few others. DC said one of them is Clark. No Prime on the list.
That ad came with my digital copy. But why would they play fair and risk spoiling the story?
**********************************
Godzylla wrote: You enjoyed this issue far more than I. Not that I didn't like it, but I came away wondering what happened to the rest of the issue. Not much happened, but the ultra decompressed stories are one reason why I dropped the series are the first arc. I'm looking forward to the other 3 issues, but I have to say I'm glad Jurgens has the anchor issues.
The nod to Ostrander's Kents mini was a pleasant surprise, an excellent series.After an interesting (and at times annoying) exchange I followed on Twitter today following a Tim Hanley tweet, it was annoying to see the escapee's artwork featuring Superman as buds with Jimmy and Perry, but rescuing Lois. If Oz's former guest is the faux Clark, that's particularly grating, whether he's Prime or not.Speaking of Superboy-Prime, so glad I never read that. Sounds dreadful from all I've heard, and I definitely don't like the idea. Earth-Prime, back in the day, was our Earth, so the conceit went. It just rubs me the wrong way to have "our" Kal-El twisted like that.Bring on chapter 2!
I don't quite get why an image of Lois being rescued is something to be annoyed by - It's hardly disrespectful. Superman rescued Lois a hell of a lot in the old days, it's a quick, iconic image, and putting Jimmy or Perry (who was rarely rescued) wouldn't have the easy recognition factor. When we have a series that shows constantly depicts Lois as pretty awesome, might you not be overthinking this one?
**********************************
MayaK46 wrote: I couldn't agree more. I was reading my old Superman Family books and there was more story told in the shorts. I am weary of this decompression (I know, need enough to collect for the trade which is another discussion in itself). This story has been going on and on and on.
I agree re Lois and Superboy Prime. I read and have all that. Want them? ;^)
I'm certainly finding enough entertainment in each issue for my money, I'm sorry you aren't.
**********************************
Godzylla wrote re: Maya's kind offer): No. No I do not. Now go away or I shall unleash Star Wars Episode I and Jar Jar Binks on you. :)
**********************************
Giffenfan wrote: Prediction: The ultimate goal of Reborn will be to fully integrate Pre-New52 Superman and Lois into the New52/Rebirth DCU. They've been assuming they are from a parallel Earth. They will instead learn what we readers know - that THIS has been their Earth all along, just transformed by Dr. Manhattan or whoever/whatever is behind Rebirth. And my hunch is they will also learn that the faux Clark, the New52 Supes, the New52 Lois are aspects? echoes? of them. There will be a "merging", and all will be as it was, with one Clark Kent/Superman working at the Planet and one Lois/Superman working at the Planet. Their son, Jon, will survive, since he's co-starring in a new monthly with Damien Wayne. More hints will be dropped about Rebirth and the end game, but not enough to give away the whole story/DC's plans for another year or so.
Sounds extremely likely, and thanks so much for putting it out there. I do want a solution that doesn't posit any Clark and Lois as less worthy, so having the New 52 versions be 'slices' of the 'old' Superman and Lois would work nicely.
Superman #18 Comments Extra