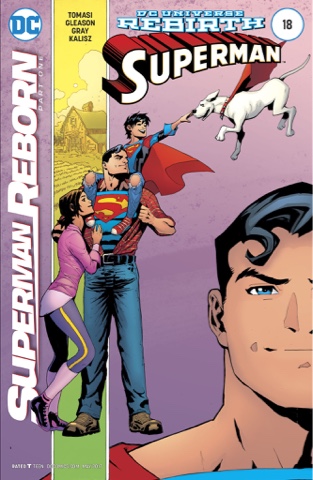 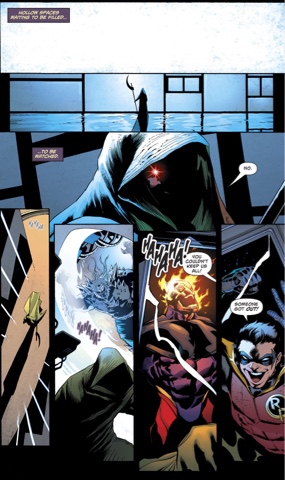 But who did Mr Oz have locked up, who would be obsessed with Superman and have the power to  break out of a cosmic cell?
Elsewhere, it's Lois and Clark's wedding anniversary, but there's an uninvited guest. 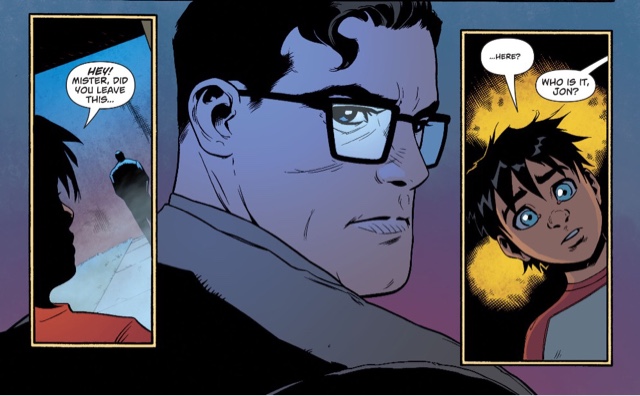 The Clark Kent doppelgänger who recently tried to romance Lois - not realising she's already married to a Clark of her own - leaves a book on the doormat. On the front it reads: The Kents - not The Smiths, which the family have been going by, nor the Whites, adopted by Lois and Clark when they settled here after their own Earth died. The Kents. DoppelClark knows.

It's memories from another time. Memories that mean something to Lois and Clark, images that make Jon wonder about a world he never knew.
They're pulled out of the moment by a fire, a cold-flame that is targeting one person... Jon.
This is an intense issue as the Superman Family we've come to love is threatened by an outsider. An outsider who wants inside, a Clark Kent who covets the life 'our' Superman has, his loving wife, chip-off-the-old-block son and loyal dog. And it seems he'll go to any lengths to, if not get it, stop the other guy from having it. How he's controlling the strange energies that took Jon away - a white force reminiscent of the original Crisis on Infinite Earths waves - isn't clear, but one thing seems pretty obvious by now. His similarities to Superman. His childish appetites and whining. The space prison. The reaction of Krypto, who was roundly abused by him in Infinite Crisis ... it has to be Superboy Prime, his memories somehow mangled. 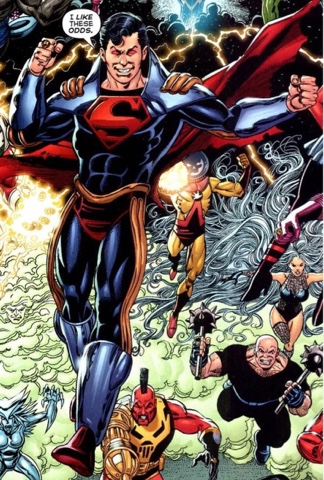 I don't even like typing that because he's such a terrible character, twisted from a cute parallel world teen hero intended for a single issue of DC Comics Presents into a super-powered slaughter machine who haunts event books. Why Mr Oz had him, I can't guess, but why does he have Doomsday? Why did he take Prophecy from the recent Multiplicity story? And I know he's super-smart, but Tim Drake?
It's Tim who provides this issue's most disturbing moment, laughing maniacally like a teenage Joker, having cracked on Mr Oz' watch. Then again, this is the smartest of the Robins, he could be feigning it, waiting for his moment. I'm not worried about Jon because unless DC is flooding the internet with fake solicits, he makes it out of this one intact. Everyone loves the wee tyke, with his thoughtful anniversary gifts a reminder of why - he's just a great kid.
The photo album is massively intriguing, where did Superboy Prime - now seemingly all grown up into a Superman Prime - get this stuff? My guess is he took pics from the crystal barrier wall he, the Lois and Clark of Earth 2 and Alex Luthor used to spend their time gazing at, when they were living together in a post-Crisis 'Paradise dimension'. Ah, comics. I especially like the nod to John Ostrander maxi-series The Kents, which followed Jonathan Kent's forebears in pioneer days.
This issue also offers a bit of a puzzle on its opening page. 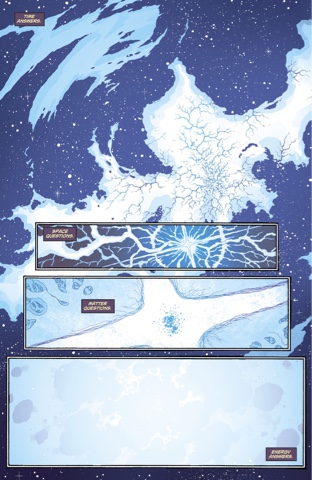 Any guesses? The Lords of Order and Chaos? Dr Manhattan having a migraine? A dimension of Beat poetry? Writers Peter J Tomasi and Patrick Gleason have me ridiculously intrigued, I hate having to wait an entire week for the second part of the story in Action Comics #975. They nail the opening scene, pacing it for maximum mystery, while the Kents' anniversary party is very sweet. 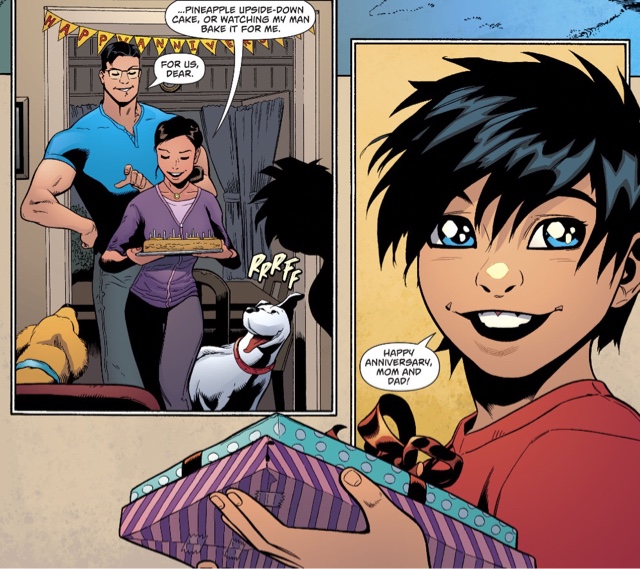 Who knew Clark could cook anything this side of boeuf bourguignon? I'm definitely making a pineapple upside-down cake this weekend. I'm delighted to see the recent addition of Krypto hasn't led to Jon's existing pet pooch being shown the door
Gleason is back on pencils, with Mick Gray providing inks and John Kalisz colours. For the most part, everything works superbly, with the opening scene and the Kents' despair being standouts; a couple of times, though, the occasionally manga-style eyes are too much, as on the anniversary panel, above. And I won't show you how Lois looks on the last page, but let's just say that perhaps she should rethink her make-up
Jon actually looks Asian-American in one gorgeous panel, as Lois, perhaps, thinks about the Doom Patrol. His eyes, his skin tone, it's like he was adopted.

Illustrator Gary Frank and colourist Brad Anderson, who regularly provide alternative covers for Action Comics, pop over here for another excellent variant. It's the regular one I'm in love with, though, as Gleason and Kalisz essay a gorgeously sunny image of the Kents, with Superman looking like he's the Man of Steel of Earth Archie. 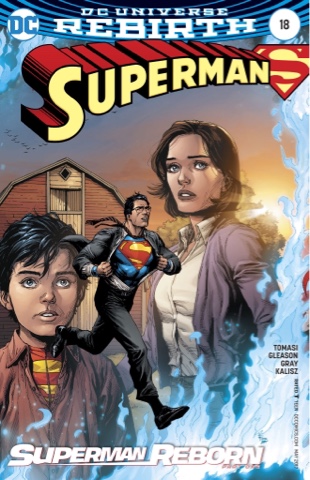 The hook for this four-parter is that it resolves the threads dangling from the New 52 Superman and Lois. If the next three issues are as exciting as this opening chapter, it's going to be a huge treat.
Brad Anderson DC Rebirth Gary Frank John Kalisz Patrick Gleason Peter J Tomasi Superman #18 review Superman Reborn