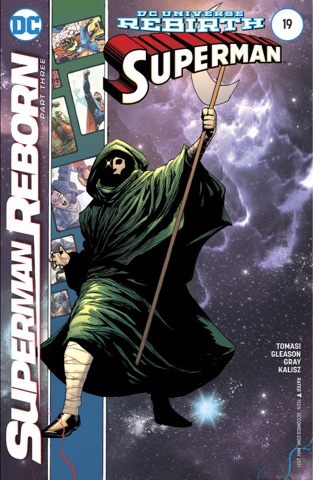 There's a moment this issue which has Super Son Jon Kent, cast into limbo by Mr Mxyzptlk, seeming to fly. He doesn't know if he actually is flying - an ability his developing Earth/Krypton physiology has so far denied him - or floating because there's no reference point.
Still, the scene jibes with my feelings as we enter the home straight of the four-part Superman Reborn story - the arc wraps in next week's Action Comics #976. Everything's up in the air, the excitement is real, but will the creators stick the landing?
May as well sit back and relax, enjoy another fast-moving episode that cleverly manages to continue from Superman #18 a fortnight ago as well as last week's Action. So yes, like an extradimensional Pied Piper, Mxy has stolen Jon from his parents. He's also zapped Lois so she's forgotten Jon exists, that she's Mrs Superman - and Clark could soon follow suit.
Jon, meanwhile, is alone, his only company photos from a Kent family album he doesn't recognise.
Back on Earth, Superman is just about keeping from going crazy, knowing he faces a madman who can likely make any of them cease to exist. If he's to get Jon, and his wife - his life - back he's going to have to play Mxy at his own game - but because the Fifth Dimensional imp sets the rules, he holds all the cards. And the venue for the game? 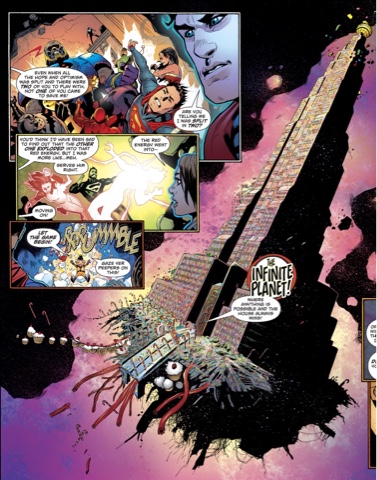 The stakes couldn't be higher. And on top of the world, Jon meets... something. 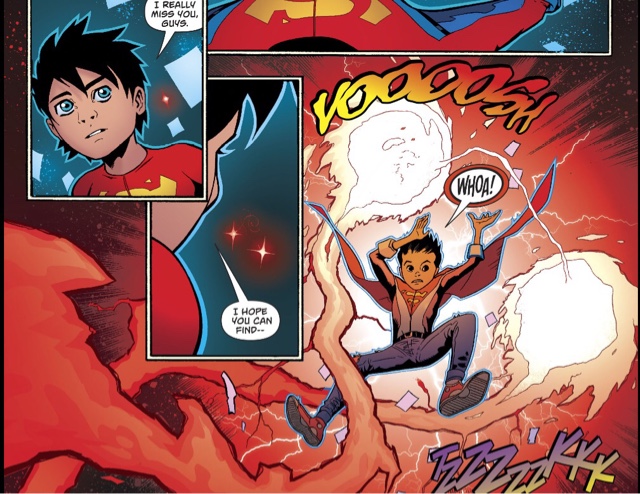 Two somethings. You likely have a good idea of where this is going, especially after Mxy's rant earlier in the issue, one which shores up hints dropped in Lana Lang's tirade in last week's Superwoman #8. And when the final splash image arrives, there's a real mix (Mxy?) of hope and trepidation.
I like this issue a lot. I'm still not sure why Mxy is suddenly surrounded by candy cane and cupcakes, and Lois is basically a bystander this issue, but writers Peter J Tomas and Patrick Gleason escalate the tension with the skill of two comic veterans who've retained the enthusiasm of tyros.
This image, in particular, is intriguing. 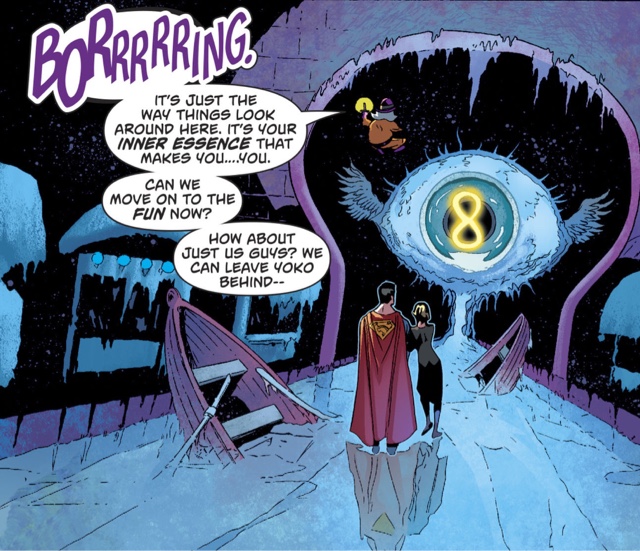 Superman recognises the blue glow that's popped up a few times in recent weeks, but Mxy dismisses it - he can't conceive of the idea that maybe he isn't as in control as he believes. Is that an infinity symbol on the front of the giant eye? Could the eye belong to Ozymandias's pet squid from Watchmen? What's with the broken boat? Something to do with Charon, ferryman of the River Styx? Are we in the Land of the Dead, about to be reunited with the aforementioned 'inner essences'?
Or is it just a bunch of intriguing visuals from Gleason, who's pencilling this chapter. The layouts are terrific, surprising yet perfectly logical for a story starring Mxy. And as illustrated by Gleason and artistic partners Mick Gray, on inks, and John Kalisz, on colours, he's really creepy, not so much a  funny old guy in a purple hat as a malevolent gonk.

The Infinite Planet is a striking visual, beautifully coloured by Kalisz, a reminder that the Daily Planet is as much a universal constant as Lois and Clark's relationship - infinite Earths, Infinite planets.
And this page is a superbly rendered representation of the madness surrounding the Superman Family. 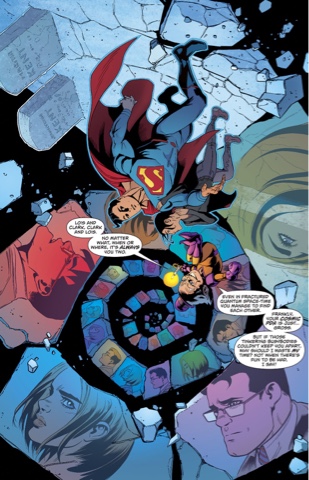 What's more, a double-page spread of Snakes and Ladders, Mxy-style, has to be seen to be believed. I must say, though, the visual of the, er, buzzing energy balls made me giggle.
Happily, Jon's too young to share my immature mind, he's too busy being a proper wee hero - calm, collected, steadfast in his belief that his Mom and Dad are coming to save him. And when things look really bad for them, he steps up in a great scene that comes too late in the issue for me to spoil.
Letterer Rob Leigh doesn't know I'm alive - oh heck, that sounds a tad Mxy - but I certainly appreciate the consistent, stylish quality he brings to the Superman books. Just look at how he breaks out the display fonts for such dramatic moments as the revelation of the Infinite Planet and Mxy's condemnation of the blue glow as

Gleason and Kalisz's cover features Mr Oz, who isn't in this issue but he's a big part of the storyline, having been Mxy's jailer and the man who opened Superman's eyes to the notion that he isn't who he thinks he is. It's a different take on Mr Oz, his usually very human features - he's reminded me of Destiny of the Endless, who encountered Superman back when he was a mere DC Comics horror host - inked to look like a mask; perhaps the Medusa Mask of the Psycho Pirate, the multiversal disaster survivor who's currently in the Batman book. Even if I'm reading too much into the image, it's great fun trying to spot the links to DC's past. Anyone have a theory concerning the bandaged leg? Or those dress shoes? 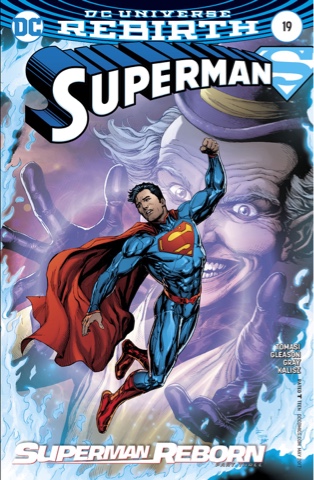 The variant cover by Gary Frank and Brad Anderson is as gorgeous as we've come to expect from this team, with Mxy menacing Superman like the dotty deity he is.
It's not often I wish an event was bigger, but it feels like there's so much more to explore with this one. I do hope Lois, Clark and Jon find one another again, and help Mxy recapture his more loveable self. Taking away all those sweeties might be a start. I think the imp is hyperactive.
Andrew Marino Brad Anderson Gary Frank John Kalisz Mick Gray Patrick Gleason Peter J Tomasi Rob Eddie Berganza Superman #19 review